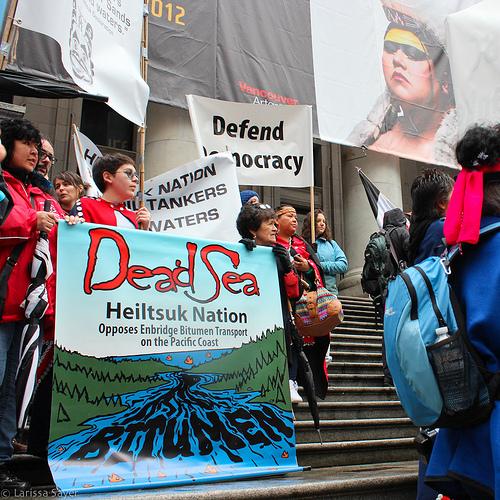 Doug Eyford, a Vancouver lawyer and treaty negotiator, is discouraging the notion that there are any shortcuts on the road to reconciliation

The Prime Minister's envoy appointed to bring First Nations onside to develop energy corridors across British Columbia is warning that much time has already been lost, setting the stage for "confrontation and resistance" rather than agreement.

While Ottawa is cranking up the pressure to reach a quick resolution to provide new export pathways for Western Canada's energy resources, Doug Eyford, a Vancouver lawyer and treaty negotiator, is discouraging the notion that there are any shortcuts on the road to reconciliation.

Mr. Eyford is not due to deliver his fact-finding report to Prime Minister Stephen Harper until November. But in a speech at a summit on liquefied natural gas in Vancouver, Mr. Eyford outlined a series of hurdles on the First Nations energy file, from overlapping land claims to an entrenched history of litigation.

At the same time, Natural Resources Minister Joe Oliver was also in Vancouver, expressing concern that opportunities for "billions of dollars" of development could be lost if settlements cannot be struck in a timely way with aboriginal leaders.

B.C. is poised for a major energy boom, with a significant array of development projects on the drawing board, from the Enbridge Northern Gateway pipeline to liquefied natural gas plants. Because much of the province remains subject to unresolved land claims, the federal government plays a key role in these projects, with a duty to consult with First Nations in the path of those developments.

"First Nations communities are expected to become experts in energy policy and make decisions that may permanently alter their cultural connection to their traditional territories," Mr. Eyford told the LNG conference on Sept. 23. "These projects are profoundly challenging for aboriginal leaders, and confrontation and resistance are the likely outcomes if their communities are not effectively engaged during the planning and development stages."

Ottawa has sought to integrate its obligation to consult on major resource projects into environmental assessments, as it did in the Northern Gateway pipeline application. But Mr. Eyford said that does not allow for the "deep consultation" required in major resource-development projects.

"From a risk management perspective, governments cannot afford to stand at arms-length from projects of regional or national importance," he said.

And the challenge of overlapping land claims "should not be underestimated," he said. "The spectre of endless conflict among aboriginal groups, including litigation, may influence final investment decisions." The Enbridge pipeline proposal alone would have to cut through lands claimed by 30 First Nations.

Mr. Eyford was drawing on the lessons he learned from a similar case that was, like the current proposals to move heavy oil from Alberta to B.C.'s coast, deemed to be in the national interest.

In 2008, Mr. Eyford was appointed by Transport Canada to resolve a dispute that was holding up expansion plans for the port of Prince Rupert. Five First Nations were involved, with overlapping and unresolved land claims. After years of litigation, the parties were entrenched and mistrustful. Delay, he said, was endemic.

"I anticipated that formal agreements would be completed within a matter of months. I was wrong," Mr. Eyford noted. The file, already four years old when he was brought in, took another three years to resolve.

Mr. Eyford was appointed last spring to help map out a settlement strategy, and he has already delivered a preliminary report to the Prime Minister. That report has not been made public. However, there are indications that his advice has led to a renewed effort to reach out to First Nations in B.C.

Last week, Ottawa dispatched five deputy ministers to Vancouver to meet with aboriginal leaders to "better understand the issues and priorities" of First Nations for resource and infrastructure development. This week, the Canadian Environmental Assessment Agency offered up cash to help First Nations participate in the Northern Gateway pipeline review.

Art Sterritt, executive director of the Coastal First Nations, dismissed the offer – $14,000 for his organization – as "a joke." However, he said he is hopeful Mr. Eyford is delivering a clear message to Ottawa about what needs to change. He said the efforts come too late to win over support for the Enbridge pipeline proposal, but could influence other developments in the energy sector.

"Northern Gateway is dead," Mr. Sterritt said in an interview. "But if we can develop a new relationship with Canada, perhaps we can sit down and have a conversation."