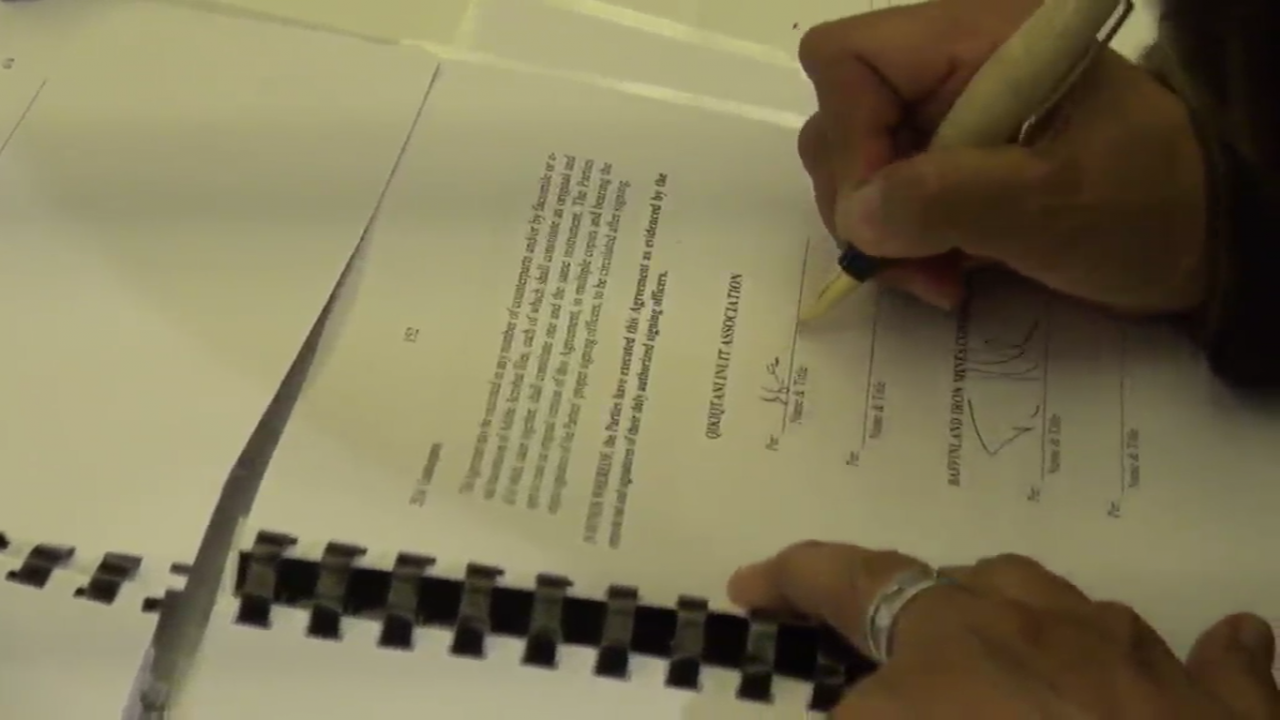 The Qikiqtani Inuit Association released the public version of the Mary River Project Inuit Impacts Benefit Agreement Dec. 6 — an agreement that sets out the working relationship between Nunavut Inuit and the Baffinland Iron Mines Corporation.

“It is QIA’s wish to share theIIBA openly,” said QIA president Okalik Eegeesiak in a Dec. 6 release. “We believe this will provide an opportunity to strengthen our implementation efforts.”

The agreement would likely direct millions of dollars into QIA’s coffers after the mine moves into commercial production. The deal also came with a signing bonus.

But most of the financial arrangements contained in the IIBA remain confidential, including royalty rates and land lease payments, although QIA said “amounts received as a result of the project will be reported at each annual general meeting.”

The full impact and benefits agreement provides few details that aren’t already included in the plain language guide that was first released this past September, when QIA officially signed the deal with Baffinland.

The agreement lays out how royalities will be paid to QIA: quarterly, beginning with the first quarter after commercial production begins at the mine.

The royalty payment is defined as “the net sales revenue for a period multiplied by the royalty percentage.”

However, the royalty rate is no disclosed.

Those payments can be re-negotiated after 30 years, or once 1 billion tonnes of iron ore have been mined.

As part of the IIBA, an implementation budget will be created along with several funds, which include:

• Ilagiiktunut Nunalinnullu Pivalliajutisait Kiinaujat Fund (a fund to offset negative social or cultural impacts created by the project and to help distribute benefits) — $750,000 per year paid by BIMC and QIA equally for the first six years;

• education and training fund — $1 million for the first two years the IIBA is in effect, paid by BIMC;

• money to pay the costs associated with implementation of any rights, obligation or requirements of the IIBA.

An executive committee will be established to oversee implementation of the IIBA, made up three senior representatives from the QIA and another three from Baffinland.

That committee will meet four times a year, and will be tasked with coming up with the minimum Inuit employment goal at the mine; reviewing a list of training and education opportunities for Nunavummiut and looking at contract award issues.

Both the executive committee and a separate management committee respond to the need for any dispute resolution.

They’ll also hire two IIBA coordinators, along with Inuit monitors, an elder in residence, a QIA employment and training coordinator and environment monitors.

Baffinland is in the process of building an iron mine at Mary River in northern Baffin Island that start by producing 3.5 million tonnes of iron ore a year.

Too bad only handful of people will actually benefit from this deal - not necessarily the beneficiaries - funny how NTI just increased the annual wages distributed to QIA, now signing bonuses and withheld info from those that serves - this is all wrong right from the get go

I know several beneficiaries and long time Nunavut residents who applied directly with Bafinland for jobs they are qualified for and been rejected or ignored. Meanwhile the 737 charter jet is flying up form St Catherines Ontario is full of non-Inuit workers. The Inuoit from Pond, Clude, Igloolik etc are only working in menial jobs. Just like Nanisivik and Cornwallis Island, majority of wqorkers will be from the south.

Here is what I see is causing the problem with these so called agreements. Three representative from QIA and three from Baffin Island. Why is the company involved with the process that determines where or how the money is distributed and spent? It seems that all over the North, companies are coming up with hair brain ideals that serve very little good or meets very few priorities in our communities. These so called funds must be managed by the people it was meant for. No exceptions.

How is this “openly” when facts are withheld?

Did the lure of signing bonus get serious thinking put into the back pocket for the pressure of instant bonus “loss” to take over thinking?

For 30 years royalties are locked in at, who knows what rate, because they cannot be re- negotiated. When it’s hush hush it doesn’t sound like one side got a good deal. Does that mean the royalties in 20 years, 2033 are still at 2013 rate? Or do the royalties increase over the years, covering inflation/cost of living?

Why isn’t QIA talking with the facts? Are we people like the polar bears, wildlife getting next to nothing, only covered for the first 2 or 5 years of the 30 years mine? Will ITK be barking for the bears in Nunavut and people or saying shhh it’s our backyard.?

Giving the free Olympic trip seems to of been an outrageously successful strategy.

This deal no longer serves the Inuit Interests, only the few Interested Inuit.  Okalik likely has generous pay as Prez from QIA and now a Signing Bonus from BaffinLand?  Why is QIA so secretive? There is no competetion directly with this deal - all sole sourcing done by Baffinland to keep the costs from over inflation and pure profits from pure extracted iron.  The true cost of this pure Iron is sure profit all around - so why all the secrecy

And the rich get richer, especially execs on these orgs! Where’s money to help me with food? Freight ? Hunting? Like usual these orgs that are supposed to protect OUR birthright just look out for themselves. I am sure the prez made her best frind the MP happy and the can both look forward to board positions with the corp and living down south permanently in the future

Everything else aside, QIA is a private Corporation legally owned by the Inuit of the Qikiqtani region. It is not a publicly owned corportation. As a regular beneficiary in the community I feel isolated from the decision makers as much as any other beneficiary. But if you bring you NTI card and insist on seeing something only meant for beneficiaries, I bet you would get a lot more information than a non-beneficiary.

The key word here is ‘beneficiary’. If you live here and are not a beneficiary - get over it.

Uninformed quote from #5 “Or do the royalties increase over the years, covering inflation/cost of living?”

If you read the article it says the royalty is a fixed percentage of Baffinland’s net sales revenue. Sales revenue, not profit. So this means it does not matter if Baffinland makes a profit. The more iron ore they sell the more royalty cash will flow into QIA. The value of the sales revenue will go up and down with the price of iron and it will go up and down with the rate of production at the mine. If Baffinland goes ahead with a future railway and port and 12 month shipping, the QIA royalties will quadruple and maybe more.

If the royalty percentage rate were known it would be pretty easy to come up with a ballpark figure for total royalty revenues every year. Problem is, probably 95 per cent of Baffin beneficiaries are too uneducated to understand this kind of information anyway.

This of course will make it easier for all the thieves inside the Inuit corporations to grab huge amounts of cash for themselves. Bring on the Baffin kleptocrats!

Its funny reading the comments, they are all the same. The question is. Did the beneficiaries actually think they would benefit from the trip to the Olympics? Sounds to me that Harry, Okalik and Levi just got GOLD.
If you don’t stand up for yourselves you will get taken advantage off by the Gold diggers.
Don’t be so GD naive. That’s why you have the right to vote and denounce the wrongs against you.
It is sad that there isn’t a Mandela amongst you.