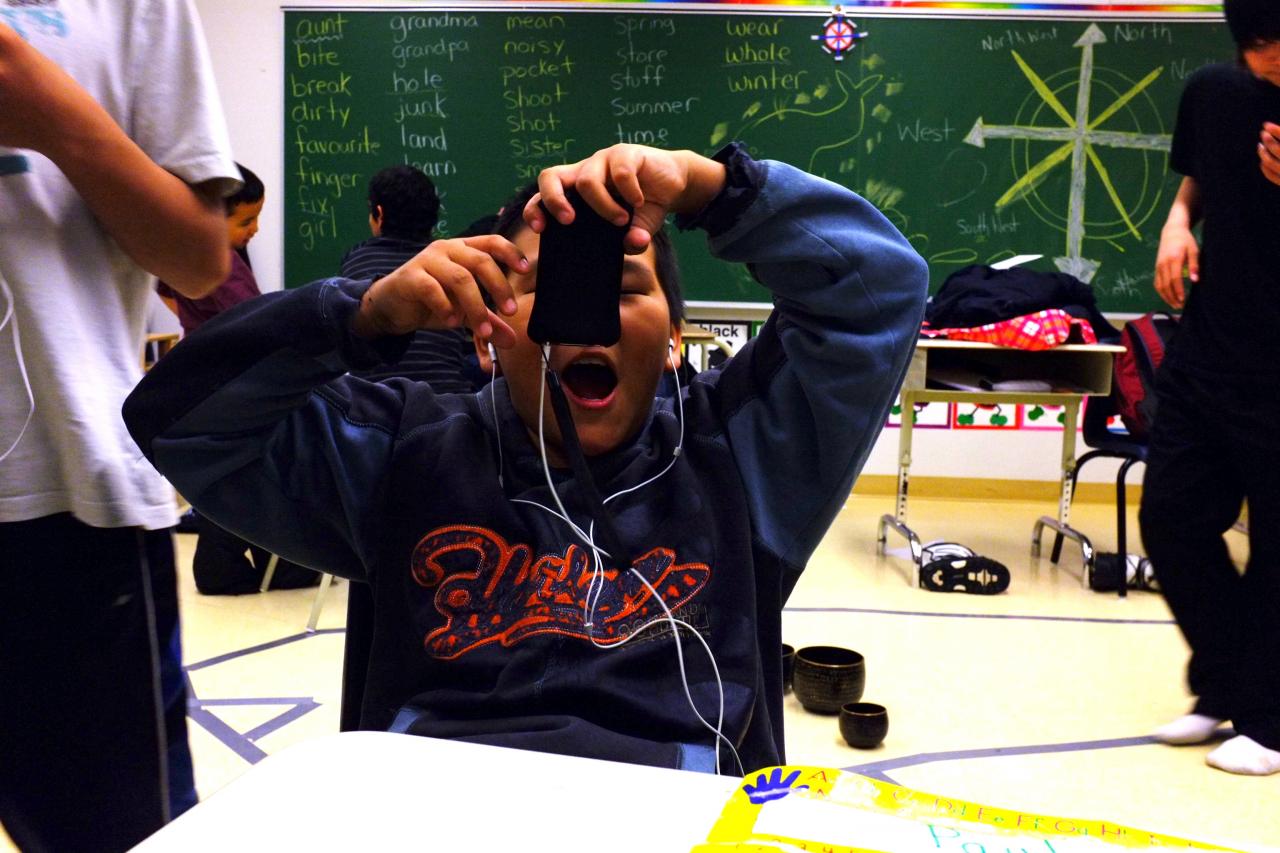 In 2012 Northern Canada's internet service is up to 500 times behind southern standards in terms of cost-per-kilobyte. Media files that permit audio-visual communication (i.e. oral, not literary) usually are too large, or too costly, to download or share. Simply downloading a browser application like Chrome can take up to 90 minutes even when using the ‘best’ internet services available. Low monthly data limits quickly are exhausted by media use.

In Kuujjuarapik – Whapmagoostui, most children do not have access to a computer at home. If they do, they have extremely low-speed internet or no internet at all.

In both the Cree and the Inuit school, technology guidelines are set by school boards based in southern cities like Montreal, and by people who may never visit these isolated communities and who are unaware of their technological limitations. When problems arise, professionals must be flown in to fix them. This situation makes local staff uneasy about the addition of new technologies. Internet at both schools is only accessible to children on the school computers in the computer lab and during the computer class. In the Cree school some teachers have a computer only accessible to them in their classrooms .

To achieve it’s objectives, ARTCO designed and developed new functionalities for the IsumaTV Media Players enabling them to receive video, audio files and images created with the iPods. The created content is sent directly to the Media Players via WiFi. The media players look like desktop computers. They have to be plugged to the internet router which provides WiFi internet and is in turn connected to the modem that connects to the satellite dish.

Some of the most important advantages of the media player system are:

Two new internet satellite connections and media players are installed in both the Inuit and Cree schools.

ARTCO’s iPod application and website is designed to be visually intuitive with the least amount of text as a response to a combination of both, a strong oral cultural tradition and high illiteracy rates.

The iPods become not only the tools to create and upload media content but also the main tool to view the content the children produce.

In Kuujjuarapik – Whapmagoostui most people rely on an internet connection provided by Tamaani Internet. In 2012 the basic internet connection offers: 512 Kbps download 128 Kbps upload, with a bandwidth limit of 10GB per month. If the user reaches the monthly bandwidth limit, the service for the remainder of the month is slowed down. In reality a user never experiences a 512 Kbps download speed as advertised, simply because a portion of the bandwidth is used by the modem and by the Internet Server Provider to keep the line open. In addition, the varying quality of the connection can also slow down the download and upload process. In fall 2011, while we were developing the activities, it was reported by the communitythat the download speeds were around 128 Kbps on the good days, and sometimes it could drop as low as 56 Kbps. The experience of downloading Google Chrome (40 MB) at a download speed of 64 Kbps would translate into a waiting time of 1.38 hours.

In 2012 most of the systems at the Cree and Inuit schools in Kuujjuarapik/ Whapmagoostui are windows based systems, often only running Internet Explorer 7. While Firefox is installed also in all the terminals at the computer lab of the Cree school, it is not necessarily the case at the Inuit school. While it is more challenging to ensure a flawless interaction using technology from older browsers, it is important to keep in mind that a trade off is needed for those cases. Often installing a new piece of software (even a browser) might need to go through a special request through the school administration.

In general, none of the children are allowed to use the internet or computer lab outside of a class. Children are not allowed to bring their iPods to school, nor connect to the wireless network. Some of the children reported that, during the weekends, they would stand just outside the school to have access to the ARTCO wireless network in order to upload content to the site.

Some of the children have either an iPod touch, a camera phone or a desktop computer at home. Laptops are rare. Some people in the community own iPads.

In 2012, most of the youth in Kuujjuarapik/Whapmagoostui spend their leisure time at either, the local gym, the youth center, outside playing on the hill or at the beach (depending on the weather conditions) or at home (often playing video games).

At the gym there is a wireless internet connection accessible by all the visitors, it is not reliable and the weeks that we were visiting we never managed to connect to this resource. However, many or the children participating in ARTCO mentioned that they uploaded content from the gym. At the gym there is also a laptop used by the staff and it is often shared with visitors. The other internet access point is the Youth Centre. We did not have the opportunity to visit the computer facilities, however we were informed by the children that they had a few computers for common use running windows. Some o the children said that their parents have a computer with internet access though not all of them are always welcomed to use it. When that was the case, they visited a friend’s house that allowed them to browse the internet.

All the children know about Facebook, there was also mention of Bebo and Hi5, no mention of Twitter or instagram. A large portion (if not all) of the older children and teenagers are on Facebook. Their privacy settings vary, some of them do not share anything outside or their circle of friends, some others have a rather open profile and their content is accessible. If they are not on the internet, they spend their computer time playing video games. Some of the children who do not have access to a computer have access to other devices to play video games. The content of the games played are rather simple, and the adoption of video games is not only among the children but also teenagers and young adults. For instance, at the local bar there is an arcade video game where the only objective is to keep a drunken man walking on a straight line by repeatedly pressing a left or right button. Among seniors, bingo is an important part of their evening social activities. People within the community take turns to lead the game and broadcast it through the local radio station.

Reaching the community: the radio station

The radio station in these communities is of vital importance. Homes, offices and schools have the radio turned on all the time in order to hear the news in town. While the younger generations might often find the content a bit boring for them, it is still a way for them to learn about what is happening in town.