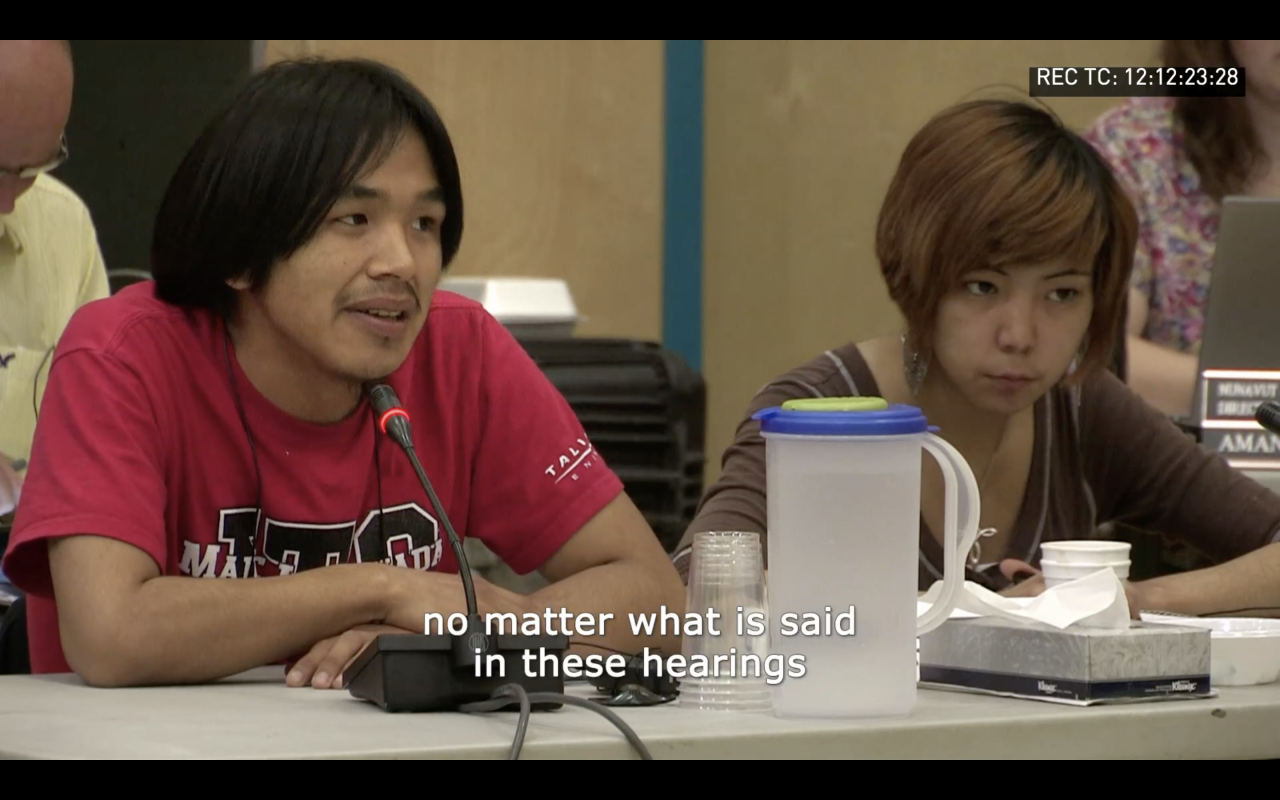 Inuit protestors blocked the airstrip and access road of the Mary River iron ore mine in North Baffin Island on Feb. 4, forcing a stop to mining and leaving the 700 mine employees stuck.
Now, other Inuit, territory wide have joined in with the protest, which shows no sign of letting up.

Inuit in the two closest communities – Pond Inlet and Arctic Bay – have said they are joining the protestors with supplies.
Baffinland, the owners of the mine, have been seeking to double production from six to 12 million tonnes annually and put in a railway to aid shipping.

They have been applying to the Nunavut Impact Review Board [NIRB] to make this move since 2014, when the mine opened for business.

Many Inuit in the area say that since more mine ships started arriving, whales and seals have been harder to find. Near the mine site, bright red iron dust makes clean snow look like a Prince Edward Island dirt road.

Many fear that the proposed railway will scare off caribou, which are already very hard to find on Baffin Island even with strict quotas in place.

On Jan. 25, the NIRB started hearings in Pond Inlet to hear technical evidence on environmental impact, which ended on Feb. 6. That last day was the only day for members to the public to ask questions and make statements.

While the protestors held the mine in lockdown, their community members made their case to the three person NIRB panel. Caleb Sangoya is a Pond Inlet hunter and has been writing down his observations about wildlife around the Mary River since 2009, when the idea of a mine was proposed. “Baffinland says no drop has taken place,” said Sangoya in Inuktitut. “From our observation, no way. When there’s ship traffic, mammals start to move away.”

Pond Inlet resident Nina Kautuq expressed a sentiment that has been coming up over Nunavut’s dinner tables since the blockade began. “I’m asking you, can you slow down,” said Kautuq. “We’re not trying to close down Mary River, but can you slow down your proposal?”

Although Baffinland has failed to hit their agreed upon Inuit employment, their economic impact on Baffin Land is expansive.
Just over 13 per cent of their workforce are Inuit, well short of their promised goal of 50 per cent, but do employ over 200 Nunavut Inuit at the mine site. A more telling figure is the $200 million they have spent with Inuit owned business.

The biggest beneficiary of Baffinland may be the Qikiqtani Inuit Association (QIA), the group that represents Baffin Island Inuit.
The Mary River mine is on Inuit Owned Land, as defined by the Nunavut Land Claim. Under that land claim, QIA -as the regional land claim group- are effectively Baffinland’s landlords They renegotiated their Inuit Impact Benefits Agreement with Baffinland in 2018. The result includes $10 million towards a training centre in Pond Inlet, $2.25 million a year toward Inuit training, $400,000 a year to provide hunters with gas and an agreement to buy a boat for a Nunavut community’s hunters every three years.

That’s all in addition to annual royalty payments that start at 1.19 per cent of profit and will eventually grow to 3 per cent. For QIA, a successful expansion would also trigger a $45 million bonus.
The owners of Baffinland estimate the value of the agreement to be near $1 billion over the life of the mine.

The protestors at Mary River have placed the blame squarely at the feet of QIA. They have a satellite phone at the mine site, and released an audio statement in Inuktitut on Feb. 4, after they had blocked operations. In it, they say, “It is due to Qikiqtani, QIA’s actions on the Mary River Phase 2 project we are protesting at Mary River. QIA has treated Inuit haphazardly. Hunters are not considered, communities are not considered, Inuit are not considered, and are only given the means to stay silent,” says the person in the statement, who has not been named.

In a statement today, Baffinland went one step farther, saying the protestors of want to form their own Inuit Association to supplant QIA. “Baffinland understands that requests have been made by the organizers to be recognized as a Designated Inuit Organization under the Nunavut Agreement and for a portion of the royalties payable by Baffinland under the Inuit Impact and Benefit Agreement to be paid directly to them.”

In the North Baffin region, the idea of a separate Inuit Association to better represent the area has been floated in recent years. Now, protests are starting to happen territory wide.
On Feb. 5, women and children with signs met the NIRB officials as they left the hearings. Today in Taloyoak, residents gathered in a show of support.

The NIRB hearings were supposed to wrap up on Feb. 6, but have been extended to include two more weeks in March in Iqaluit, with up to five representatives from each of the seven nearest communities. The final decision will not end up with NIRB however. NIRB’s role is to make a recommendation to the federal government, who can choose to ignore or approve the plan.

A group of hunters have situated themselves on an airstrip at Baffinland’s Mary River project in addition to blockading the road leading to Milne Inlet.

According to several posts on social media overnight, the hunters are protesting a proposed expansion of the company’s Mary River iron mine. Baffinland’s proposal to expand the mine by building a 110-kilometre railroad from the mine to a port at Milne Inlet has been the subject of two-week Nunavut Impact Review Board hearing, now in its 10th day.

A news release from Baffinland Iron Mines Corp. says “security personnel were alerted to the presence of a hunting party on the airstrip” at around 10 p.m. Thursday night.

“Baffinland respects the right to peacefully protest and continues to work with the hunting party to maintain the safety of everyone at Mary River,” states a news release from the company.
“Communication between the hunting party and Baffinland is ongoing.” More to come…

This unprecedented coverage is an exercise in digital democracy, giving Inuit and concerned audiences everywhere unfiltered access to the proceedings being conducted by the Nunavut Impact Review Board (NIRB) in Iqaluit and Pond Inlet, starting on January 25 and continuing until February 6.

Suspended since March 2020 due to the pandemic, NIRB in-person hearings are proceeding despite Inuit community concerns about COVID-19 safety risks and their ability to be sufficiently informed and consulted.

Among those scheduled to speak are representatives of the five most impacted communities — Pond Inlet, Igloolik, Sanirajak, Arctic Bay and Clyde River — along with staff from the Qikiqtani Inuit Association (QIA) which is responsible for managing Inuit owned lands in the Qikiqtani region where the mine is located.

Operating since 2014 in the Qikiqtani region of north Baffin Island, Baffinland’s open pit iron mine has raised concerns among lnuit and non-government groups over land and water contamination, the impact on Caribou and marine mammals, and the implications for Inuit livelihood, language and culture. Its proposed Phase 2 expansion includes building a 110-kilometre rail link to double from 6 million to 12 million metric tonnes the ore shipped annually from Baffinland’s northern port near Pond Inlet. If Baffinland adds the 18 million metric tonnes previously approved for a southern route through Steensby Inlet, its Phase 2 expansion could increase bulk-tanker shipping fivefold.

Uvagut TV’s Saqpinaq Carol Kunnuk and Ben Kunuk will broadcast the Hearings live from 9 to 5 on weekdays, with a daily round up starting at 5:30PM with interviews and analysis hosted by Lucy Tulugarjuk in Montreal and Zacharias Kunuk in Igloolik speaking with guests through zoom. The hearings will be broadcast in Inuktut and English with simultaneous translations.

The team behind Uvagut TV has been documenting Baffinland proceedings since 2012 while simultaneously developing expertise in live local broadcasting from the remote arctic.

Uvagut TV is available nationally on Shaw Direct basic satellite channel 267; on Arctic Co-op basic cable and satellite channels 240 or 267 in Nunavut and NWT; and online worldwide at www.uvagut.tv and www.isuma.tv.

NITV is an Inuit-owned and controlled non-profit Northern Online Distributor and Eligible Broadcaster. Founded in 1991 in Igloolik, Nunavut, as a training centre for Inuit community filmmaking, NITV is dedicated to the enhancement and preservation of Inuktut and Inuit culture through the creation and exhibition of Inuit video art linking Nunavut communities through Internet television channels and local access internet-TV, media training and digital literacy initiatives, the production and distribution of Inuktut video and film — and now broadcast television. Isuma is the Inuit filmmaking group that produced landmark Inuktut-language features, Atanarjuat The Fast Runner (Cannes camera d’or 2001), The Journals of Knud Rasmussen (TIFF Opening Night 2006) and One Day in the Life of Noah Piugattuk (Venice Biennale of Art 2019).

Nunatsiaq News "Despite Inuit opposition, Mary River mine hearing to go ahead next week broadcast live on Uvagut TV" Jan 21/2021