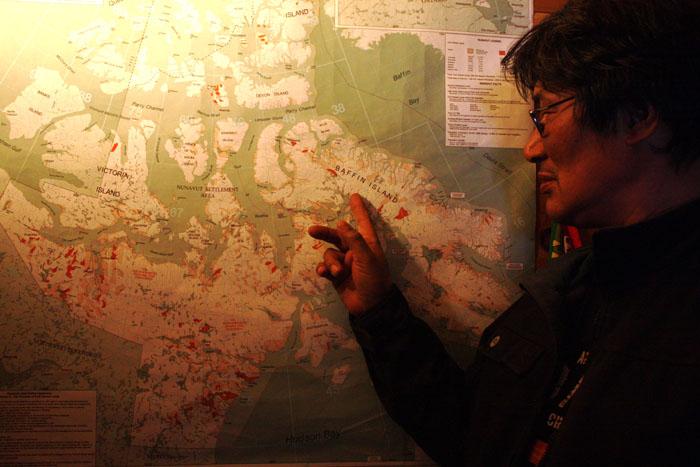 BW: Can you describe the Digital Indigenous Democracy project?

DID project. What is it? First of all, it was BEACEN [Baffin Environmental Assessment Community Education Network]. BEACEN was a project we were doing with Carleton University and the hamlet of Igloolik. We lost our funding for that so we applied for funding for DID through the Canadian Media Fund and we got approved. Our original plan was, we were going to connect the seven communities, the impacted communities, Kimmirut, Cape Dorset, Hall Beach, Igloolik, Clyde River, Pond and Arctic Bay through the internet TV system so we were communicating together. Right now we’re not communicating community to community, we’re all separate, doing our own thing.

BW: So how is DID different from BEACEN?

We moved in the direction of radio. We have this radio program where everybody comments on what is happening. Because everybody was quiet. Government of Nunavut is quiet, NTI is quiet, QIA is…quiet, but working through the Mary River project committees. And I joined the Igloolik committee but no one was really talking to the people. So we knew there was something going on. The IIBA [Inuit Impacts and Benefit Agreement] is being negotiated but it’s so secret that we don’t know what’s being negotiated.

And then Norman [Cohn] spearheaded the DID project, got the human rights lawyer [Lloyd Lipsett] and Norman asked me, “What do you want to do?” I want to film the area, I want to film the wildlife, I want to film the port site, Ikpikitturjuaq, which everybody is talking about. Then I came up with a documentary and put a new title on it, My Father’s Land. Just take people out, take them back to the land where they used to live and talk about what they did, what was going on there. So it’s all connected. We’re trying to let people talk; talk about what they think because mining is all around us.

BW: When you say QIA is quiet, NTI is quiet, what do you mean? What are they not talking about?

BW: You’re a member of QIA. Do you know anything about the IIBA?

BW: Only certain members of the QIA know what’s being negotiated in the IIBA?

Only certain members know. I only know the timeline.

BW: How do you want the mine to be negotiated?

BW: Can you tell me about your project, My Father’s Land?

I want to videotape wildlife, landscape, plant life, just basically this beautiful land and all these animals on it, on the sea, on the land. Film it now and film it ten years later. Same land. See what’s different. Because Elders keep saying these animals are undisturbed, they’re happy. We’ll film them now when they’re undisturbed. And let’s film them when they’re disturbed.

BW: Do you remember when you first heard about the Mary River Project?

Mary River project. I heard about it a long time ago from a friend of mine who’s long gone, Lucien Okalenuk. He used to work there when they were just prospecting in the 60s, then it went quiet for so many years, now it’s emerging again and this time we’re looking at the biggest iron ore mine in the world.

I didn’t really know what it was then. I knew people were going there every spring to get soapstone, because there’s a soapstone quarry there. They hauled rocks back to the community and we carved it. Mary River is a central place going to Pond Inlet—Mittimatalik—people pass through there because this is flat land where we are, and up by Mary River, that’s where the hills and mountains start.

I grew up there in the Qammaktalik area. We had our sod house, just my family alone, me and my brothers growing up, caribou migrating in the spring time up to the grass in the fall. We hunted caribou, seals in that area, a lot of fish, and then I left it. When I was nine years old. In the past, the mining companies, they would just come and do what they wanted. Now, after the Land Claims, they have certain rules they had to follow, and this is the first one in our area.

BW: How did you feel about it, when you heard about it?

At first I wasn’t concerned, but when I knew it was coming, I was concerned about the icebreakers’ ballast water, because I knew what happened to the Great Lakes. I was afraid that it’s going to happen here.

Then, because everything is new, people were concerned about the caribou migrations. We asked, what if they’re migrating and a couple of caribou get railroaded? What happens to the carcasses? And in the environmental impact assessment, I saw that if there were road kill, they would give it to Inuit. Oh my god! was going through my head, oh my god! I know that people don’t eat road kill. And here they were going to give it to us so we could cook it.

BW: Did your ancestors know that there was metal there?

BW: Baffinland took you to the Mary River site. Can you describe what you saw?

I went to that place as a council member. Every year, Baffinland would fly us to Mary River to Ikpikitturjuaq, and they would fly us around where the railroad’s going to be with helicopters.

Basically, we were visiting. We’re visiting the site, we’re walking around the building, their recreation room, their kitchen, their office rooms. We’re walking where people are living, all these portables side by side. There’s people we know in there. We go in and they’re killing time, just playing cards, and everybody’s busy or maybe they have to look busy because we’re there, that goes through my head.

And then we jump on these trucks and we go up to Mary River and we go to the top of the mountain and walk around. We pick up some rocks to take home and drive back down the mountain, back to the site. Then we take a look at the rock quarry they’re drilling, taking samples. We look at those and they tell us what it is, and then we jump into three helicopters—there are 12 of us, from Hall Beach and Igloolik.

We jump on three helicopters and we go right down to Steensby, following the proposed railroad route.

BW: Did you see any animals down there?

Nah. Probably scared away. They’re drilling all along the rail route plan. Drilling here and drilling there and drilling. And this is the first time for us, learning about pre-construction, what it means…they’re already working. And then we’re flying back over where they want to make the winter road.

BW: And out of every ten workers you saw there, how many were Inuit?

Maybe one. One or two.

BW: What do you want people to know about Baffin Island that they don’t know already?

Aami—I don’t know. In the springtime, at this time of the year, when the birds are on the land, they’re laying eggs and they’ll go to these little islands. People would come back with these boxes full of eggs. All kinds of eggs. Tern eggs, eider duck eggs, geese eggs—there’s two types of eider ducks—old squaw eggs, seagull eggs, all kinds of eggs, different sizes. Boxes full of eggs, and we had eggs all we wanted. I don’t know. I don’t know about the future.

BW: What do you want to accomplish with the DID project?

BW: How can the way this mine is negotiated affect future mining in Nunavut?

We have to get this model right on everything: shipping, mining…I mean not right but close to right. So our negotiators will have the experience down the road if they start to talk to the other mines that want to open. This is not the first. The first one was Nanisivik, and then the Polaris mine. And now, after the Land Claims, we’re heavily involved. And this one is different because it’s so giant. The biggest iron ore mine in the world. They want it. They can take it; it’s the middle of Baffin Island.