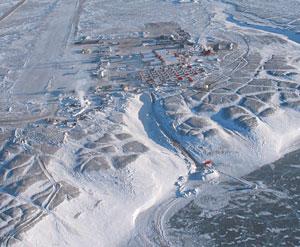 Just two weeks after the May technical meetings that took place in Iqaluit regarding the Mary River Iron Ore project, Baffinland has published a report explaining why the proposed port at Steensby Inlet is the only viable location. After the meetings, the NIRB stated that “key issues” such as the location and impact of the railway and port would, “warrant focused discussion” in the future July hearings.

However this new 32-page document sent out by Baffinland (which you can download a PDF of here, look left under ‘attached files’) seems to show that the company is in no mood to debate this question further. Their report highlights time and again how Steensby Inlet is, “an essential feature of the proposed project” (p.32). They have three main arguments: the need for year-round shipping, elevated costs of building a port at another site, and environmental factors. Baffinland claims that there would be only two other options that would even be considered.

One is a port on the Eastern side of Baffin Island (see p.16 of document). They claim this port could only be accessed 10 months of the year instead of year-round, because of the heavy icepack. For them this is considered seasonal, and therefore out of the question. But if this assures the protection of one of the rarest and most fragile marine habitats in the country: the calving grounds of the walrus and the endangered bowhead whale, perhaps this sacrifice is worthwhile. Both these animals would be seriously affected by the constant, heavy boat traffic in the Foxe Basin and Hudson Strait. This is especially true of the walrus, since the two largest groupings of Atlantic walrus are in the Foxe Basin and Hudson Strait. The danger for bowhead would also be very serious, since their very existence depends on their calving grounds in this region. This is one of the few places in the world were bowhead feed and reproduce. The risk for bowhead would not be as high if the shipping went through the East of Baffin. ArcellorMittal has many mines that operate seasonally, such as the Fire Lake iron ore mine in Northern Quebec. And seeing how Mary River is the mine with the largest and purest deposit of iron ore in the world, with a capacity to produce like no other mine of its kind, a ten-month shipping season instead of twelve does not seem like it would threaten it that much.

The other option is to build a port at Nuviut, south of Steensby (see p.25 for the map) This could also be accessed year-round, would require less boat travel, and less danger to the walrus population that live closer to Steensby Inlet. But Baffinland claims that the ground is less stable there, and so building costs would go up in order to build another port. This would require extra facilities and take, in their estimates, two years longer to build. Furthermore this location would require a railway almost twice as long, which would lead to other serious environmental consequences, especially for the caribou.

Baffinland refers to two maps in their report (p.30 and 31) to support their claim that the sea route will not affect the Inuit harvest, or the walrus and whale population. But there are many detailed maps from other very credible sources that give quite different results. This is somewhat suspicious, and leads me to believe there needs to be more consulting with locals to come up with a DEFINITIVE map of the region’s wildlife before a final decision is made about the location of the shipping route. I have attached two of these maps here (look to your left under ‘attached files’).

Whichever way you look at it, it seems as though there is no way any one of these locations will not drastically alter the environment and wildlife of the area. Baffinland claims the Steensby Inlet port is the most cost-effective and the least environmentally endangering of the sites. But really this seems like a case of the best of the worst, which is not very appealing.
Any location will lead cause irreversible damage.
So what happens next?

Please leave comments below. What do you think about the location choice? What should/can be done about it?