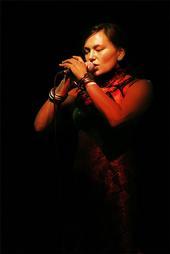 “Calling Tanya Tagaq an Inuit throat singer is like calling Yo-Yo Ma a cello player. Sure, it’s accurate, but it’s not the whole of what he does. Like Ma, Tagaq is the best of what she does – innovative, inspired.”
The National Post, Canada

“… [Tagaq] made it (Inuit throat singing) sound fiercely contemporary, futuristic even. Recalling animal noises and various other nature sounds, she was a dynamo, delivering a sort of gothic sound art while she stalked the small basement stage with feral energy.”
Jon Caramanica, The New York Times

“… Tagaq rose to the occasion with a performance that was simply elemental. Her approach is essentially abstract …Yet her singing delivered very concrete images of winter storms and summer sunshine, of birth and death and sexual ecstasy, of struggle and survival.”
Review of Jan 30, 2010 performance with Kronos Quartet
Alex Varty, The Georgia Straight

What do free improvisation, Inuit throat singing, and hair-raising passion have in common? Add descriptors like mesmerizing, intimate and ‘pushing the edge’ to the mix and you begin to understand the breadth and endlessly inventive quality of Tanya Tagaq’s sonic equation.

Heralded by fRoots magazine as a “magnificent, unique, overwhelming life force,” Tanya Tagaq is a contemporary performance artist who uses the ancient traditional Inuit art of throat singing to bring her singular talent to audiences around the world. Since breaking onto the world stage in 2001, she has emerged as a Canadian national treasure.

Tanya is the first to admit that her music defies description. Alternately called primal, orchestral or free jazz, almost all of her performances are improvised and, as she confesses, “It feels like I dial in another frequency. I go to places where I surrender to all that terrifies and excites me.” The end result is a staggering array of music performance that portray in full colour sound the scope of her life experiences.

Born and raised in Cambridge Bay, Nunavut in Canada’s high arctic, Tanya grew up surrounded by Inuit and western culture. Although traditional music was always on the periphery, it was the sounds of pop giants such as Janis Joplin and the Doors that first captured her imagination. It wasn’t until her teenage years, while away at school, that she began experimenting with Inuit throat singing. She gradually developed her own solo style, fusing her contemporary interests with the ancient artform. Her first professional gig at a festival in Inuvik won the admiration of friends of the great Icelandic singer Bjork, eventually leading to an appearance on the artist’s 2004 CD, Medulla and a chance to accompany her on tour. The rest, as they say, is history.

As a solo artist, Tanya has released two critically-acclaimed albums with her band – Sinaa and Auk/Blood – both of which were nominated for Juno Awards (Best Aboriginal Recording) and (Best Instrumental Recording). The albums also took first place in several categories at the 2005 and 2008 Canadian Aboriginal Music Awards, including Best Female Artist (2005). Her commitment to stretching her musical boundaries has led to projects in different mediums and with groundbreaking artists. In 2005, the world-renowned Kronos Quartet invited her to participate in a monumental collaborative project Nunavut, which was performed at venues across North America and Europe, including a stop at New York’s Carnegie Hall. The ensemble reunited in 2007 for the creation of Tundra Songs by Derek Charke, which dazzled audiences at the Vancouver 2010 Cultural Olympiad and subsequent performances on international stages.

More recently, she has ventured into film, contributing to the soundtrack for “Diaries of Knut Rasmussen,” and wearing dual hats as musician/narrator for the award-winning National Film Board documentary, This Land. Her latest film project was the stunning video Tungijuq, for which she collaborated with musician Jesse Zubot and Montreal filmmakers Felix Lajeunesse and Paul Raphael. The film premiered to rave reviews at the 2009 Toronto International Film Festival and 2010 Sundance Film Festival and also won for “Best Short Drama” at the 2009 imagineNATIVE Film + Media Arts Festival Awards.

Presently at work on another album, Tanya has no shortage of ideas for new projects, spanning the start of a throat-singer choir to experimenting in ‘metal’ territory. She’s also eager to continue her collaborations with artists outside her musical zone. Wherever she lands, you can be sure the result will be out of this world.

More from this channel: Tanya Tagaq