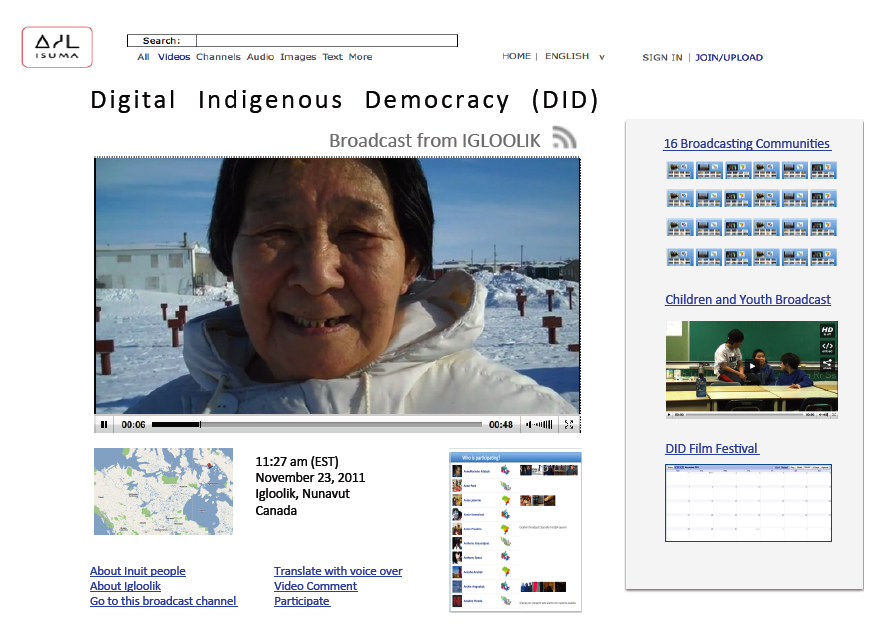 Digital Indigenous Democracy is a proposal to the Canada Media Fund Experimental Stream for $1 million funding in 2011-12. It is a partnership among IsumaTV, NITV (Nunavut Independent TV Network), the Hamlet Councils of seven Baffin Island communities led by Igloolik, and scholars from Carleton University and Mount Allison University. You can DOWNLOAD the complete proposal by PDF here in three parts: Part 1: DID/Text; Part 2: DID/Support and Part 3: Screenshots. You can READ our one-page Executive Summary below.

Digital Indigenous Democracy: Political Networking 3.0 Among Slow-speed Inuit Communities
How is it innovative?
Digital Indigenous Democracy (DID) is the innovative use of interactive digital media by 8 remote Baffin Island Inuit communities in the face of two immediate existential threats to their survival. First, global digital media will make their 4,000 year-old oral language extinct unless they begin to create digital media in Inuktitut by the next generation. Second, a rapid increase of multinational mining development threatens to overwhelm Inuit communities who lack the information and communication tools to protect themselves. Global warming has triggered a multinational ‘rush’ in the Baffin region for gold, uranium, diamonds and the world’s richest iron ore deposit ever discovered. Because this is Canada, not Congo, environmental assessment processes guarantee Inuit rights to participate in decision-making that affects their future. Unfortunately, interactive digital media tools that make such participation possible or effective – providing information, communication and political organization – do not work in low-bandwidth Baffin communities. To overcome this handicap, DID installs in each slow-speed community a low-cost, innovative package of community-based technology that allows users to jump the Digital Divide and use interactive media at high-speed. As the world’s first digital public space for Indigenous people to interact freely as equals in their own languages and exchange Indigenous know-how and millennial experience, DID helps humanity navigate what will be an unpredictable and dangerously challenging 21st Century.

• Digital Indigenous Democracy innovates politically, applying traditional Inuit values of collaboration, consensus decision-making, environmental stewardship and resourceful adaptation to modern new media; and building a unique communication partnership between Inuktitut-speaking communities and scientific researchers to insure Inuit benefit from information essential to their survival that was formerly inaccessible and unintelligible to them. DID’s Baffin Environmental Assessment Community Engagement Network (BEACEN) connects 8 Inuit communities with key academic partners from Carleton and Mount Allison Universities; and reaches out to other Indigenous communities in Canada and worldwide. This revolutionary combination of traditional Inuit values, modern scientific research and new media technologies creates a positive public model of informed cooperation for Canada and other governments and cultures to follow.

• Digital Indigenous Democracy innovates creatively, integrating tradition and technology to invent new forms of interactivity – in narrative storytelling; boundaries between fact and myth; the creative tension between action and patient attention; and media conversion, not translation, of literacy to orality – that bring Indigenous imagination into today’s state-of-the-art multimedia conversation for the first time. DID demonstrates this throughout Nunavut, across Canada and to a worldwide audience through BEACEN InteractiveTV, a series of 12 monthly interactive online broadcasts hosted in participating communities, that assemble through the year the collective practice of digital democracy to change the historical imbalance of power and information between local Indigenous communities and multinational mining companies moving into their lands.

What is the targeted market? How is the product different?
Digital Indigenous Democracy brings together Canada’s most talented Indigenous media artists – Dr. Zacharias Kunuk O.C. (Atanarjuat The Fast Runner), Neil Diamond (Reel Injun), Dr. Alanis Obomsawin O.C. (Kanehsatake: 270 Years of Resistance) among others – to imagine an evolution of internet not limited to technical breakthroughs for highest-speed urban users; but as innovations of purpose, enabling 3.0 political networking among Canada’s least privileged and most marginalized citizens. DID is unique: no media organization, university, government agency or NGO in Canada or any developed country currently targets the dangerous consequences of leaving internet service in its remote Indigenous communities hundreds of times behind advancing national standards.

How will we generate revenue and sustainability?
By CMF’s own definition, our result aims for nothing short of ‘revolution’: equal democratic new media empowerment of Inuit and Aboriginal citizens in their own languages and points of view, solving real problems at high-speed working together in a 3.0 political network. Sustainability of common costs will be generated from membership fees contributed by participating communities, and by outside Sponsor organizations that pay to join the network to be able to communicate with remote users using high-speed interactive multimedia.

More from this channel: IsumaTV