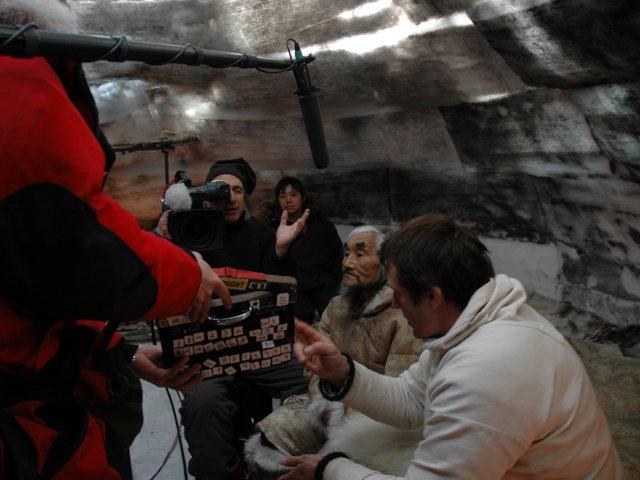 The Internet has been down in Igloolik for days: no access at all. That's why we haven't been posting anything new on the site this week. But a lot has been happening - and here's some of the backlog!

Monday afternoon: there's drama on set. A night scene is being shot in Aua's Snow Palace. The outside of the igloo has been covered with black tarpaulins and caribou furs, to block out all the daylight. It's very effective; the Qulliqs glow amber on the blackened walls. The scene looks great.

But it's not so good for the igloo ice. As shooting goes on, the roof gradually melts away, drip by drip - until finally, it collapses altogether. The whole top third of the igloo comes crashing down. Undeterred, the crew keep shooting, camera assistant Felix Lajeunesse holding up the tarpaulin until the scene is done.

Tuesday morning: the igloo roof has been completely rebuilt. There's no sign at all of the previous day's drama. And the interior of Aua's quarters have been refashioned; it almost looks like a different igloo altogether. Which makes sense, because Tuesday's scene is set a year after the main events of the film, and shows Aua explaining the changes of the past year to Knud Rasmussen. Everything looks different, because everything is different.

Wednesday: the last day of shooting in the Igloo Snow Palace. The day is so eventful that I'm going to give it a separate entry. But as we set up, it strikes me that this shoot is being unusually heavily documented. There's a television crew from the Canadian Broadcasting Company (CBC) here at the moment. Last week, the set hosted a journalist from the film trade paper Screen International. I'm doing a weekly column in the London Daily Telegraph; and then there are all the resources right here on the SILA website.

Meanwhile, Greenlandic film-maker Kenneth Rasmussen is making a documentary about the shoot for the Danish co-producers Barok Film, while Krista Uttak is often to be seen on set with a digital video camera, recording events as they happen. There were six moving image cameras in the igloos during the set-up on Wednesday, and countless still cameras.

I guess all this is a mark of the interest around the world in this movie; but it's also an indication of how open Zach and Norman are as film-makers. There's a trend among major studio directors to give the public greater insights into how they work - Peter Jackson's video blog for King King is perhaps the best-known - but it's generally on their own terms. Few directors will open their sets up like Zach and Norman have, and let you get as close up to the creative process as this.