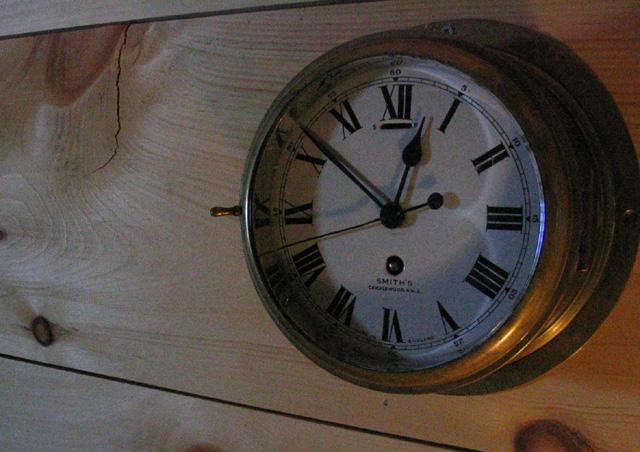 9pm - I arrive at Norman Cohn's house Tuesday evening for the first night of shooting. All the streets around his house have been sealed off by Francis Choquette and his team. They will remain sealed until the shoot finishes.

Over the past week, Norman's living room has been transformed into Captain Comer's turn-of-the-century ship's cabin. It has been refitted with wooden planking on the floor and walls, and thick beams on the ceiling. The props on Comer's desk include period pipes, maps, and a walrus tusk. In the corners, we see his fine collection of Inuit weapons. On the walls and shelves are other Inuit artefacts: shaman necklaces made with polar bear claws and caribou hooves; ulus (semi-circular cutting tools); ice masks. The floor is covered with rugs made from polar bear fur and Arctic fox pelts. There is no way you would ever guess that only a week ago, this was a modern domestic residence. Or that one of the film-makers is still living here!

9:30pm - Zach Kunuk coaches Norman in his Inuktitut dialogue. In addition to doing the cinematography, co-directing and producing the film, Norman is playing the part of Captain Comer. Meanwhile, the ship's lamps are being lit. There's a debate about where and how they should be placed. Thinking their way into the mindset of Captain Comer, the crew decide on the best and most likely placement. There are four oil lamps and two candles on one side of the room; a Qulliq (seal-oil lamp) and another couple of oil lamps on the other side.

10:00pm - All the electric lights are turned off. Norman shoulders his new Sony High-Definition 24P camera, and surveys Comer's desk through the lamplight. "You've got to see what this looks like!" he says. The camera is hooked up to a monitor. It looks fabulous. The lamplight is incredibly rich and warm; it glows off the natural wood surfaces. The colour contrasts are very strong; the blacks deep, the bright colours vibrant. "Now we need someone to sit in Comer's chair," says Norman. "SF: sit in Comer's chair." So I sit in Comer's chair, posing as Evaluarjuk, while Norman and Zach decide that there is no need whatsoever for any electric lighting: they are going to shoot in here using lamplight alone. The camera is that good.

10:45pm - Shooting is scheduled to start in fifteen minutes, yet this is the most relaxed film set I've ever seen. Zach is calmly smoking a pipe. Norman is eating a peanut butter & jelly sandwich. Art Director Louis Uttak is fixing some props; Sound man Richard Lavoie is setting up the clapper board. Everyone is remarkably calm, given that this is the first day of filming. But then that seems to be the way of things around Isuma. It's as far removed from the world of monstrous film industry egos and star tantrums as it's possible to be.

11:00pm - The actors arrive in full costume and make-up: Abraham Ulayuruluk (Evaluarjuk), Pauloosie Qulitalik (Harry), Natar Ungalaaq (Nuqallaq), Leah Angutimarik (Apak), Michelline Ammaq (Shoofly), Domonic Angutimarik (Angutimarik, his namesake), Attuat Akkitiq (Kukiilisaq), Jacinta Satuqsi (Anulik). They look terrific, especially the older women, who are sporting traditional face tattoos. Gradually, they settle into the cabin. They have never rehearsed these scenes, or even been in this space together. They all know the script, but the way in which the script is realised will be discovered as we go along tonight.

11:30pm - The set is cleared. The first scene is set up. Zach sits at the monitor; Norman looks through the camera. He is also acting in this scene, so after the shot is designed, he must then switch positions. There is no storyboard; the set-ups get decided here and now.

12:20am - And - action! Scene one, shot one, take one has commenced. The Journals Of Knud Rasmussen is underway.

1:15am - Two takes later, a new shot is set up, from a wider angle, involving more of the actors. Zach arranges them in space with great precision, fine-tuning the composition. They improvise their Inuktitut dialogue, talking and laughing together. Mid-way through the scene, Norman takes the camera hand-held to shoot from another angle. They keep talking, keep improvising.

1:50am -We all watch the playback together. It's good; there's a sense of real life being observed. And it looks absolutely stunning.

3:00am - Another group shot, with more improvisation. It's fascinating to me how these scenes are made. The film-makers set up the camera, and then encourage the actors to interact with each other. The scenes often take different angles and emphases from the script, depending on what evolves. While Comer seemed a strong character as written, in the scenes as filmed, he is really only there to help establish the Inuit characters, especially Evaluarjuk and Nuqallaq. Though Nuqallaq has almost no dialogue, Natar Ungalaaq is bringing great presence to the part.

3:20am - A much-needed break for sandwiches and soup, which are delicious.

4:00am - The next set-up features a long improvisation by three women and an accordion. Perhaps only a few seconds of this will make it into the final film. This style of film-making means that a lot of material will be shot which will never be used; but even so, it's done in one take.

5:00am - The final scene of the night features the singing of an ajaja song. It is hair-raisingly beautiful, and in the context of the film, heart-breaking. I find myself crying, twice. But then, it is very, very late.

6:20am - Taima. It's a wrap. The first night's shooting is completed, and some great material has been filmed. I feel like I've seen something very special.