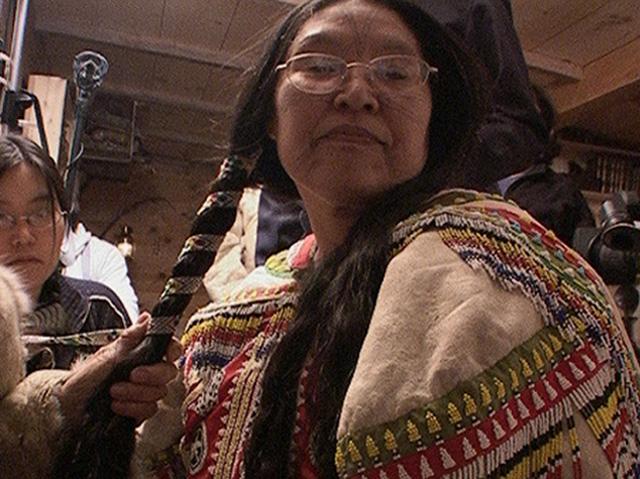 When you're shooting a film over two consecutive nights, one of the biggest challenges is sleeping in the day between - especially when it's a bright, beautiful Arctic day out there. I managed a very fragmented 5 hours after writing my blog yesterday. It wasn't nearly enough, and when I found myself saying "Good morning!" to people at 7pm, I began to feel I was losing touch with reality.

But it turns out I'm not alone. As we shape up for the second night's shoot, almost no-one has had enough sleep. Michelline Ammaq snatched just 4 hours, as did Felix Lajeunesse. Richard Lavoie cunningly covered his windows with black wrap, and got 7. But Zach Kunuk is by far the most successful sleeper on this set; he says he slept 10 hours yesterday! How does he do it? All part of being an award-winning director, I guess.

Tonight, I watch the actors preparing before I hit the set. They arrive at the Isuma office around 9pm to change into their costumes. The biggest job is the face tattoo make-up, which Lucy Tulugarjuk tells me can take more than 2 hours to apply. It needs regular topping up as the night goes on, and it's painstakingly delicate work - but well worth it. I notice that only the older women have tattoos; the younger women don't. In Atanarjuat, it was universal. This is one of the many ways in which the film us shows that we're in another time now; fashions are changing, moving on, like everything in the early 20th Century.

We're filming in Comer's cabin again tonight, which has been recreated in Norman Cohn's house. We start setting up around 10pm, and the camera rolls just before midnight.

Once again, everything is lit using oil lanterns, candles and a Qulliq (seal-oil lamp); there's no electric light at all. To add to the atmosphere, Natar Ungalaaq (playing Nuqallaq) puffs on a pipe all night long, sending up thick billows of smoke. It looks great, giving every shot extra texture - but before the night is through, I find myself glad to live in a world which has discovered the concept of non-smoking areas.

The main scene we're shooting is a conversation between Comer (Norman Cohn) and Evaluarjuk (Abraham Ulayuruluk), with a number of other Inuit characters contributing occasional lines. It must be filmed many times, from many different angles, to give the film-makers full coverage to cut between when they edit.

The biggest difference from last night is that there's a lot more scripted dialogue this time. Improvisation is easiest when there isn't scripted dialogue, just descriptions of action. ("They talk amongst themselves," for example.) For tonight's scene, the actors have clearly been working hard to memorise the lines as written, but sometimes, this isn't what the film-makers want. They continually emphasise the need for spontaneity, authenticity, improvisation. "Don't try to say the exact words in the script," Norman tells them. "Just say it how you would say it."

We shoot take after take until Zach and Norman are satisfied that it looks and sounds completely natural. The hardest part of the scene is a joke; natural-looking comedy isn't easy to produce on demand. But Igloolik actors show perseverance that would put many Los Angeles professionals to shame, and they get there in the end.

The highlight of the night's work is a scene in which Comer takes a photograph of the Inuit characters. For this shot, Michelline Ammaq (playing Shoofly) dons a intricately beaded Amauti (a woman's parka), decorated with red, green, yellow, turquoise and black beads. Her hair is tied up in Tuglikaq (hair wraps with colourful mirrored braids). The costume was based on a photograph of the historical Shoofly; it took her and Attuat Akkitiq weeks of work to make it.

The feeling of history being recreated is tangible; there's something about seeing this scene that makes my skin tingle. Again, there's that sense of change; of the modern world, bearing down on these characters and this culture.

We wrap at 5:45am. All the scenes in Comer's cabin have been completed; the shoot will move tomorrow to a new location.

But me? I'm off to get some sleep.