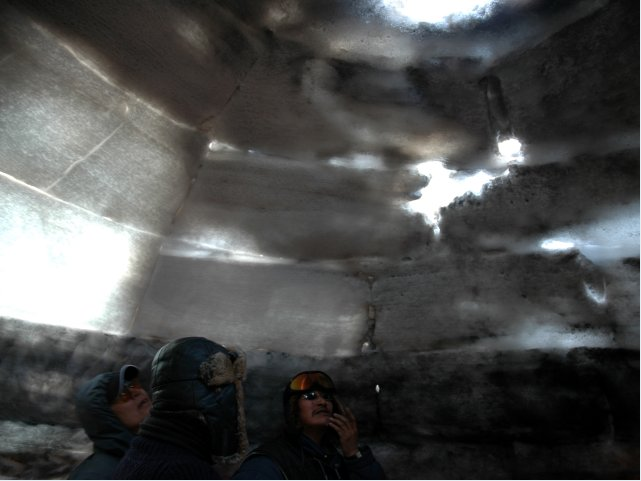 It's Monday morning, 9am, and the roof of the Igloo Snow Palace is leaking. No: it's melting. Holes have appeared over Aua's quarters. From each hole, there's a steady drip-drip-drip of water. The worst is right up at the top, by the kagnirq (breathing hole), which has widened dangerously. It looks to me like it might collapse soon.

Louis Uttak, Pauloosie Qualitalik and John Armatsiaq come round to inspect the roof. The problem is, we've been using a naptha stove to warm the igloo up for shooting, and then letting it freeze again overnight. But they agree the roof isn't going to collapse; it just needs some fixing up.

John carves some chunks of snow, and holds them up by the heaviest drips, where they freeze into place and stop the worst of the problem. Then John and Louis go back outside the igloo, and start patching up the holes with blocks of ice. Showers of snow spray inside as they work, splattering the sound equipment. Richard Lavoie moves it aside, while Felix Lajeunesse covers the camera with a waterproof thermal blanket.

But by late afternoon, the dripping is back, worse than ever. The set is melting over our heads. It's agreed that the roof of this igloo will have to be rebuilt.

So by Tuesday morning, 9am, Aua's igloo has a pristine new roof. It takes four people an hour to do the job. They remove the old roof piece by piece, working from the top down, one block at a time, taking down almost a third of the whole igloo. Then they rebuild it the same way, block by block, spiralling up to the top again.

It's an inspiring sight. There may be unique problems to igloo shooting, but there are also unique solutions. As I watch them carving and shaping the snow, it strikes me as an extremely useful thing, to be able to rebuild your roof any time you want. I can't rebuild my roof; I can't even assemble self-assembly furniture. I'm a little humbled by the practical competence of the people I've met here; the only thing I know how to do is put words together.

Despite all the challenges, shooting in the igloos is going to schedule. Yesterday, there were more scenes in Aua's quarters, with Orulu (Nevee Uttak) telling her life story, and Knud Rasmussen (Jens Jorn Spottag) listening. These takes lasted almost half an hour each, and were highly demanding for both Nevee and Norman Cohn, who was filming it hand-held, the heavy camera slung over his shoulder.

Today, shooting moved to one of the other igloos in the Snow Palace - the one where Apak (Leah Angutimarik) lives. It's a much more intimate space than Aua's quarters, big enough for a couple to live in, but not much more. It looks comfortable and warm, spread with caribou furs, and lit with the flickering lights of a couple of Qulliqs (seal-oil lamps).

Today's shooting involves a passionate love scene. A big black tarpaulin has been pulled over the entrance to Apak's igloo. It's a closed set, for obvious reasons. Zach Kunuk tells me the actors feel most comfortable doing the scene without any observers, even a cameraman - so they've been given camera training and some mini-cameras, and they're going to try filming it themselves.

I just hope the roof holds out...