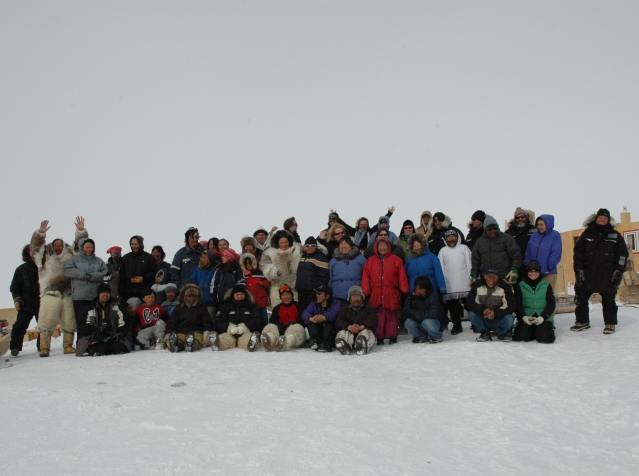 Up and Down/Out on the Land

Up and Down / Out on the Land

Today, we are 10 days into our shoot at Siuraajuk.

The first week was difficult for cast and crew. A day after arriving, we realized we had many more people here than originally planned (70 instead of 40!), which irritated the cook so much, he stormed off in fury and hitched the next skidoo ride back to Igloolik, never to return. Our unit manager went soon after. To top it off, the tents erected for us were drafty and cold and DARK! Very unlike the cosy white canvas tents Inuit use for camping out on the land. Smaller and easier to heat, they also let the light stream in.

The cast and crew went ahead with the shooting schedule, but there was a fog of gloom mixed with anxiety hanging over the the camp for several days. We all wondered how things would turn out...

We're happy to report that SILA crew members quickly regrouped and soon were installed in the kitchen to make sure everyone was fed. Relief cooks, dishwashers, and a big food order arrived from Igloolik, which meant there would be lot's of food for everyone! One of our main decisions was to cook "uujuk" at every meal in addition to the fancy sauces and pasta dishes the professional chef had prepared. Uujuk is any kind of boiled meat: caribou, seal, walrus, etc. It made Inuit very happy and helped solve the problem of feeding so many people.

The Inuit elders - Louis Uttak and Pauloosie Qulitalik- became the defacto camp leaders and soon had the young men working on insulating the tents and improving the efficiency of our gas heaters.

By the second week, things had fallen back into a regular rhythm, though life at the camp is not easy by any stretch of the imagination. The directors Zacharias Kunuk and Norman Cohn gave the crew a pep talk: "Making a film in the arctic wilderness is hard work! If it were easy, everyone would be making one. We are the only ones who have ever done it, with Atanarjuat. If we stay focused and on track, we will have another great film!"

With a week and a half to go in the shooting schedule (time FLIES!), some actors are already wrapping up and going home. The Greenlanders -Juanna, Qillaq, Piuaitsok, and Sofie - have finished their scenes and left this morning on a charter flight to Qaanaaq, Greenland. Though Kenneth Rasmussen, who is filming the "making-of" documentary, is not from Qaanaaq, he joined them on the trip, and will eventually make his way to his home town of Aasiaat in Northern Greenland.

Jens Jørn Spottag ("Rasmussen") is also finished and jets back to Denmark with Barok Films producer Elise Lund Larsen later today. On the same flight out of Igloolik we'll be bidding farewell to anthropologist Nancy Wachowich and little Hector, who will make the long way back to Scotland.

Before they left Siuraajuk, everyone gathered at the sea ice to say their good-byes, give each other hugs, and take a group photo of all cast and crew on site. We've grown fond of each other, made friends, and have gotten to know each other's culture and language.

There is still more filmming to do, but it is hard to believe this arctic film adventure is in its home stretch!