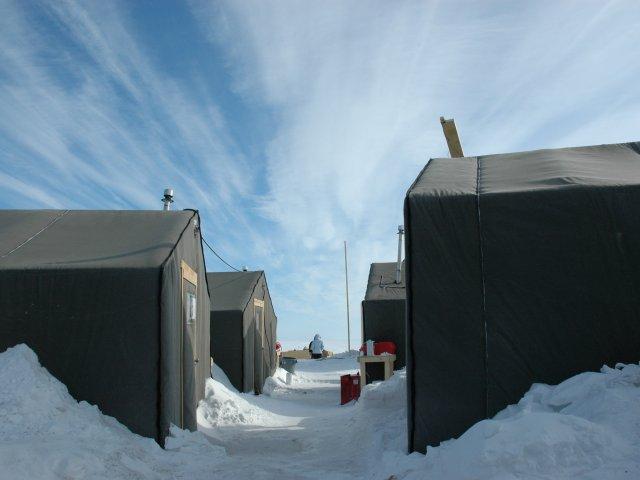 Internet in the Remote Arctic?

Internet in the Remote Arctic?

So the SILA crew is back after three days of no Internet! Maybe it was a shift in the magnetic pole or a sunspot, but our local connection has been down for the last 72 hours.

Not so great when you're trying to do a daily production journal on-line, but par for the course when you are working in a remote Arctic location like Igloolik.

We hope you missed us - we certainly missed you!

The coming days bring a few changes to our Live from the Set coverage. The cast and crew of The Journals of Knud Rasmussen have a few more days of shooting near town: we are at the trading post of George Washington Grover Cleveland today and tomorrow. The jolly Cleveland is played by one of Québec's biggest actors, Pierre Lebeau!

On the weekend we pack everything up on to qamutiks and go to Siuraajuk, a remote outpost camp about 70km north of Igloolik to shoot exterior scenes. Here, Françis Choquette and his unit crew have constructed a camp for the film crew, complete with kitchen and office space.

If you think Igloolik is remote, Siuraajuk is even further removed from it all. It is a 3 hour skidoo-ride over the sea ice to the shores of Baffin Island. No electricity, no phones, no Internet!

Undaunted by these challenges, your faithful SILA crew will continue sending up-dates about the film shoot from way out there. We will upload regular production blogs with the help of a high-speed data satellite phone.

At this crossroads, Jobie Weetaluktuk leaves the SILA team to return home to Montreal. We also welcome Nancy Wachowich to our ranks, an arctic anthropologist and ethno-historian whom Isuma consulted during research and writing of the JKR script. Nancy clambers onto the qamutik, with her 6-month-old son Hector in tow, to write about film production from the outpost camp (the subject of her current research). Evermore adventurous, SF Said will trek out with us to Siuraajuk, too!