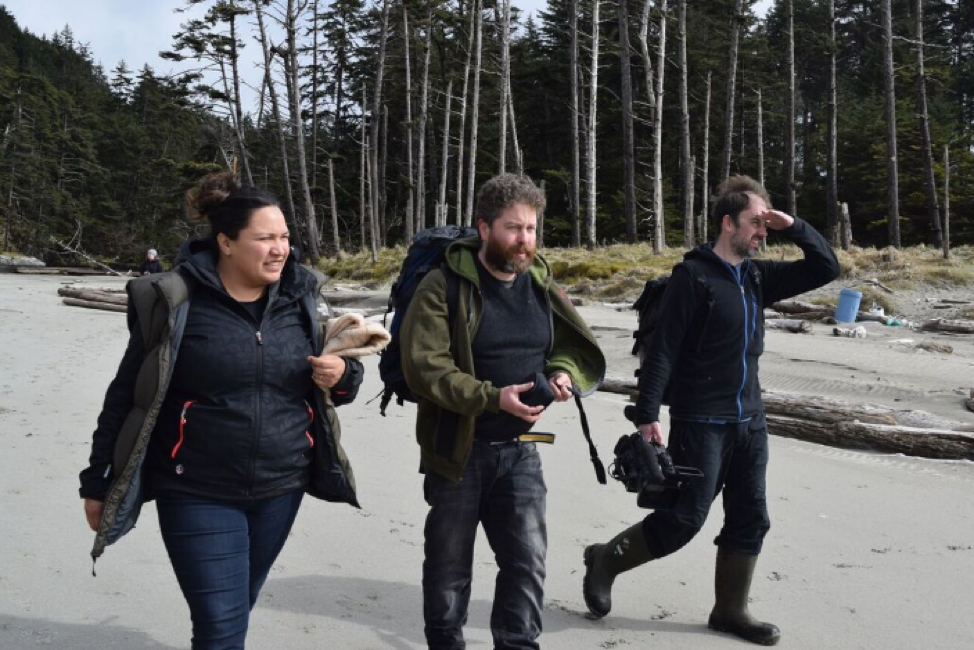 A collaborative approach
Conversation with Jon Frantz on October 17th, 2017
By Gabriela Gámez

I asked Jon how was the decision-making organized throughout the filmmaking process. Jon recounted how most the decision-making was done together with the film directors. Gwaii, Helen and Jon would consult all the time the many aspects of the film: the budget, the scheduling, the financing so that everything was very transparent. This way of making decisions certainly took a lot of time but it meant Edge of the Knife film was done in real collaboration which is definitely not usual in professional feature filmmaking and something to celebrate.

Jon – One of the things we lost a lot of time on was deciding where were the shooting locations. We spent about 8 months on and off visiting locations. At the end, this decision was made by an economic reality and the logistics. There were beautiful places we visited but could not afford.

Gabriela – Jon, this filmmaking process is a lot of work and a long process. I’m curious to know what part of it is that interests you most? What gets you personally excited?

Jon – I always get excited when I’m shooting. To me this is really the pay-off to doing all of the producer’s duties – it’s the trade off.

Gabriela – Wow…really? I didn’t expect that. In previous films to this – and even in this one – I had the understanding that you really wanted Norman to do the camera work. That you were even disappointed when he said he would not do that work.

Gabriela – Why didn’t you jump at the chance then when Norman decided not to shoot Edge of the Knife? I thought you were hesitant then…

Jon – I didn’t want to impose my shooting on Helen and Gwaii. So we started talking to a lot of DPs (Directors of Photography). Helen and Gwaii wanted to explore other options, and I thought I could learn from someone. We interviewed 3 to 4 DPs and none of them felt right to the directors. Or some of them withdrew their interest. So that’s when Helen and Gwaii asked me to do the camera.

Gabriela – Wow! I’m really surprised to learn camera work is one of the things that you enjoy the most.

Jon – Well I don’t know. If I were to do the camera work all the time, then it would be different. The whole process is important for me, the whole concept, the 3 years of experience. I’ve been to Haida Gwaii 20 times, I’ve eaten with elders…then, my camera work is more interesting and responsible.

Gabriela – Did you receive any kind of mentorship from Norman on your camera work, even from a distance?

Jon – Early on when I started working on Isuma, I told Norman that I wanted mentorship advice. And he told me that everything he knew was in his films, that I should watch all of them over and over because all of his knowledge was there, every single aspect that he has included was deliberative: why the light was there, why it was shot in a certain way. It was all embodied in these films. So I watched those films over and over, and again over the years. The first time I received direct feedback was on Our Baffinland project, in 2012. It was the first project I worked on for Isuma, where I was second cameraman and where I didn’t have much direction from Zach. I was in Vancouver working on the edit and Norman was in Kitsilano, so we were able to spend one week together and watch this edit. During that week, he pointed out a couple of clips and explained what made them great. This was the first time where I really got it, where I clearly understood what he meant. The second moment I got it, was on the edit of Maliglutit (Searchers) done by Norman. Watching what he decided on and appreciated.

Gabriela– I understand you also talked to him a couple of times while you were filming Edge of the Knife.

Jon – Yeah we did have some conversations. But the Searchers’ shoot was 22 days and Edge of the Knife 29 days. Norman’s feedback has been more reflective – after the fact.

Gabriela – As a cameraman, how was it different or similar to work with the Haida or the Inuit?

Jon – There were some similarities in the process, like building trust and comfortable relationships with the actors. On my camera work, I like to build a friendly relationship so the actors don’t get nervous, because our way of shooting means you physically have the camera very close to the actor – 12 inches away from their face – so you have to be in a certain state: no judging, very comforting, never critical of their work or their performance. I like spending time with them without the camera, walking, eating. This kind of filmmaking is very demanding, in both shoots, Searchers and Edge of the Knife, you are travelling, in the cold, in the rain, wet, and always trying to be ready as a cameraman. Before the shooting, I needed training mentally and physically so that the shooting starts to become second nature.

Gabriela – What were the similarities or differences in the directing approaches of Helen, Gwaii or Zach?

Jon – There is a stark difference in the directing approach. Zach doesn't direct his actors – he lets them feel comfortable and take ownership of their acting. Helen gets very involved, she rehearses the movement and every position of the actors is choreographed. In working with Helen, I get to be more selective of the camera position and rehearse. In Searchers, half of the time was more like shooting a documentary, with Zach you forget a lot of the time that it is fiction. With Gwaii and Helen we would go through every scene together. Then, before the actors had their costumes on, we would bring them in and rehearse the scene, prepare the lighting. After this rehearsal, the actors would come back with their costumes and we would shoot. It was a long process, lots of conversations and lot of people involved. So a lot of the time we were running behind and sometimes this was stressful. Receiving the input from everybody takes a lot of time. With Zach, it passes much faster. Getting to the location takes a lot of time but, once we are in the location it’s fast, we do a take and move to the other scene. The decision-making process in both cultures is quite different.

In the Inuit culture, when you go hunting as young boy or girl, you sit back and you watch. You don’t talk. They don’t explain. They just go hunt and kids watch, and when they are ready they start to do something on their own. When they are ready, they hunt. Haida follow a different approach, there are hierarchies and the female is the boss. So in this film, there was a need for hierarchy and the more we did this, the more comfortable it felt. In the matriarchal lineage people are told what to do. And at the beginning on our film, our crew was amazing and talented but also inexperienced, so people started to feel really overwhelmed. It really helped when Helen’s instinct started to take more control and be the leader on set. She was very close to the actors and put a lot of her resources there. At times it was not that easy because there were also two communities – the Haida from both the north and the south and their different approaches came to the surface.

Gabriela – How many people were on the set?

Jon – On the biggest days we had 60 people on the set, 43 Haida, 7 non-indigenous and 10 indigenous people from other Nations. It was the crew, the actors, the two directors, myself as a cameraman, the language experts, the elders, two young very good language speakers, the cooks and the camp people.

Gabriela – Who are these two young very good language speakers?

Jon – It's a Haida community in Alaska. They have a fairly strong language group. We worked with Ben Young, who after finishing high school spent 5 years full-time with his grandfather learning 40 hours a week how to speak Haida... he is a shining star.