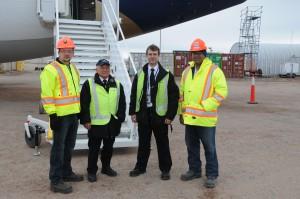 The construction decision was made possible as a result of the recently completed Inuit Impact Benefit Agreement (IIBA) and Commercial Production Lease (CPL), which were executed jointly with the Qikiqtani Inuit Association on September 6, 2013.

The Mary River Project has undergon an environmental impact assessment for the past 5 years, which culminated in a Nunavut Impact Review Board Project Certificate in December of 2012. The receipt of the Project Certificate allowed for the Class A Water License process to be completed with the Nunavut Water Board in July 2013. Collectively, these approvals along with the IIBA and CPL have given Baffinland the necessary permissions to began construction.

“Announcing a construction decision is a significant milestone in the evolution of the Mary River Project. Many years of environmental reviews and negotiations have led us to be able to reach this decision. Our work at Mary River and Milne Inlet will focus on construction activities that are currently approved through the environmental assessment process. As further approvals are obtained in the coming months our construction activities will encompass development required to achieve our Early Revenue Phase and allow for the eventual shipment of ore.” stated Tom Paddon, President and CEO of Baffinland.

Along with mobilization efforts, Baffinland has promissed to also offer extensive training and to undertake recruitment initiatives to allow for Inuit, particularly from the North Baffin communities, to participate in employment opportunities created by the Mary River Project.

Baffinland says it will now focus on completing the 2013 cargo and fuel sealift deliveries, as well as the construction of camp and fuel storage facilities, which will allow for construction activities to continue throughout late 2013 and into 2014.