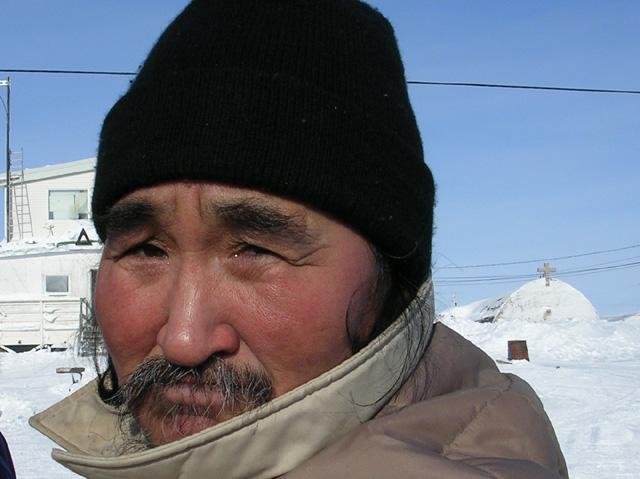 Can you tell me who you are?

I am Samueli Ammaq. I live in Igloolik. Although I was born in Sangunaniq, I just say I’m from Igloolik. I am only recently of Igloolik, but I live here.

What do you do in Iglulik? Are you a hunter?

I am just a hunter. I am also just a loafer. (laugh). I am a hunter and a stay-at-home. I don’t have a job. I only do paid work when a production is in progress and only when they need me. That's when I work.

You go hunting by skidoo and by dog-team?

Oh yes but now we don’t use dog-teams very much anymore. It’s not so good anymore the (dogs) are usually tied up, so they become unmanageable while getting ready for a journey. So it’s not very exciting, even when you go by dog-team. They are also much wilder, more shy of people. It’s better for the wilder ones though, the tame ones usually get killed. Tame dogs are easier to kill, so the wilder ones survive. That’s really too bad it’s like this. It also the way we do things, so we have to put with it.

Some of us aren’t trying very hard to keep dog-teams. Some people are still using dog-teams. When they have dogs, they go by dog-team all the time. Then like they old days, their dogs are much better (behaved and fit).

With your experience what do you think of dog-teams? It seems keeping a dog-team is a lot of work. It’s not tedious to keep dogs?

Yes. Some of us don’t like the idea of throwing any food away. Some of us also like to hunt. It is also a great joy to go by dog-team when the dogs are working well. It can bring a lot of satisfaction. In some ways, it better than going by skidoo. If it doesn’t become too difficult then it can be great. I don’t like the tedious, so for me it’s great.

Skidoos are very convenient, so many of us, well me in particular tend to gravitate to the convenience of skidoo. I don’t go by dog-team that often. I go infrequently. I go when I have a customer for bear hunting. When we are gone, then they are much better. I can keep them free from the chain and they become great dogs. It’s only here (in town) where we have to keep them chained that they become (lazy and untrained).

Your dogs are being used by the Greenlandic cast?

Yes. My lead dog, Tooguyuk (the very fluffy one), seems to be speaking in Greenlandic now. I think he is learning Greenlandic and at the end (of the production) he will probably be fluent in Greenlandic. It will be a lot of fun.

The (Greenlanders) have a very different way of using dogs, which is no problem for me. I know those dogs will not always be my dogs. They will be my dogs only for a short while, so I don’t care what they are taught. They will learn the Greenlandic way and maybe even learn a few words in Greenlandic.

You are also acting in the film in the role of Umik, “The Prophet”. Can you tell us a bit about who Umik is?

I don’t know him at all, but I have only heard a little bit about him. He must be the one buried at Aukanaajuq, called Umiktalik (where Umik lies). That is where he died. I have heard that he became a believer in Christianityand I will try to play his role. That’s what.

Do you have anything else to say?

I appreciate the role although I have some reservations based on my own conversion. I have become a believer in God. I have come to know God and if I did not have that experience, I would be really, really excited about the role. At first I wasn’t thrilled about the prospect of playing Umik. I was a little frightened to play the role actually. I was a little frightened of God. Now it’s perfectly alright. It’s just acting after all and the people I rehearsed with were very pleased when I rehearsed my parts. Things like the hymns, which I don’t know that well. They have been very excited, so it has been very pleasant. My collegues are very encouraging. I will play the role to the best of my ability. I will try to be Umik and in some instances I will be Umik.