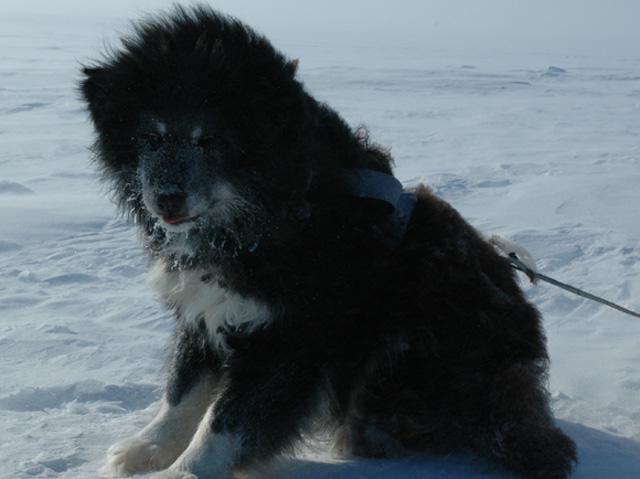 Who are you and what is your role in the film?

My name is Tooguyuk, which means “big fluffy dog”. I'm actually from Igloolik, and am Samueli Ammaq's lead dog. In the film, I am going to play the lead dog of the Greenlandic character Bosun (played by Qillaq Petersen from Qaanaaq).

How have you been preparing for the role?

I've been rehearsing with my team and with the Greenlanders regularly. We're always in top condition so what's going to be hardest is controlling our excitement between shots.

How long have you been an actor?

I've always enjoyed the arts, but have never acted in a feature film. I've performed for my fellow doggies, but nothing of this calibre.

What are the differences between an Igloolik dog and a Greenlandic dog?

I have to lose a bit of weight because Greenlandic dogs are a bit smaller. They also have bigger ears but we don't have it in the budget to custom make prosthetic ears for me and my team. I like that Greenlandic dogs have priority on the roads; a skidoo must always follow the dog teams and can never pass them. Dogs there are in a lot better shape, since they are used all the time by the Inuit there. In Greenland people are not allowed to hunt with skidoos, only by dogteam. They're very strict about breeding dogs over there, they can't transport them out of the country, so I'm happy about that because now I can be in the movie.

How are you dealing with the language barrier?

Well it's always hard dealing with humans, but my owner uses some simple commands. The Igloolik commands are:

So for example, my owner might say Oy-ooo-Ava which means pay attention, don't get too excited because we're stalking a seal.

The Greenlandic commands are:

Any plans for the future?

Well, my girlfriend is having puppies, so I'm excited to be a daddy. That will keep me busy for a while, helping them learn Samueli's commands. Other than that I'll keep training for my next starring role!