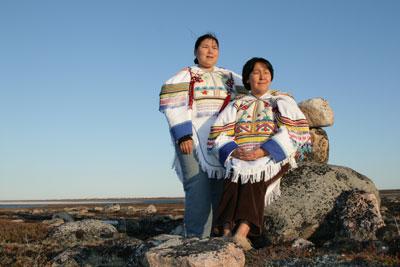 Lois Suluk-Locke speaks about the particular style of throat singing from Arviat, Nunavut.

Listen to Lois Suluk-Locke speak about the particular style of throat singing from Arviat, Nunavut, the most southern Inuit hamlet located on the western shore of Hudson Bay. Arviat means the place of the bowhead whale.

Originally, Inuit throat singing was a form of entertainment among Inuit women while the men were away on hunting trips. Two Inuit women face each other while standing or crouching, and hold each other's arms. One leads with short deep rhythmic sounds and the other responds. Lois speaks about how the tradition is slowly disappearing as the young women of today no longer throat sing.

Lois, along with her singing partner, Maria Illungiayok, will throat sing at next year's celebration of the tenth anniversary of the Cumbre Tajin Festival - a major cultural event hosted by the Totonac people in Veracruz, Mexico. They will be the first Inuit to participate in this festival.

More from this channel: IsumaTV Interviews