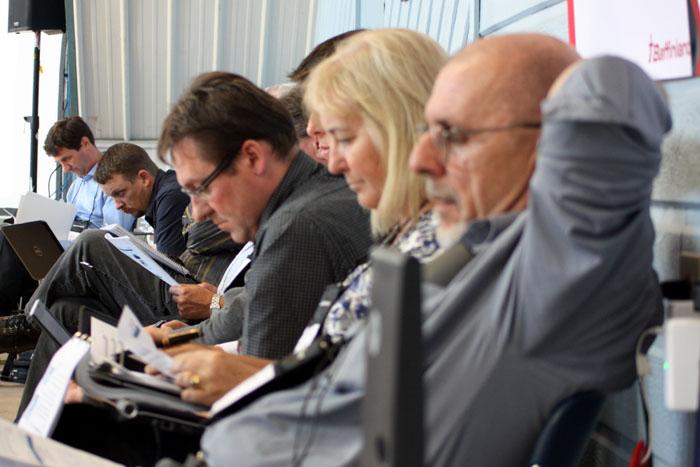 Submissions by the government of Nunavut department of Environment, Environment Canada (EC) and the Department of Fisheries and Oceans (DFO) examined the project’s effects on caribou, polar bears, migratory birds, fish and marine mammals. “Lack of baseline data” in intervenors’ presentations became as frequent a phrase as “adaptive management” in the environmental sections of Baffinland’s talks.

In its cross-examinations, Baffinland criticized intervenors’ analysis of the sparse available data and questioned the conclusion that unknown effects on the North Baffin and Foxe Basin ecosystems necessarily translate into harmful effects. Of course, the only way to know for sure is to conduct more studies and monitoring on those ecosystems, but where Baffinland won’t be responsible for conducting those studies, who will?

Peter Hale, manager of wildlife research, presented the Nunavut Department of Environment’s conclusions on the North Baffin caribou herd; namely, that a 21—and possibly 100—year mining operation in the declining population’s calving grounds could not only significantly impact the herd, but “could adversely impact the viability of the population.” Given that there is no long-term scientific data on caribou patterns of migration or abundance near the mine site, and that Baffinland can’t be expected to conduct studies on migratory animals outside of that site, Hale relied on his own survey data to conclude that the herd is unpredictable but definitely declining and that Baffinland should post surveillance along the railway route to track and monitor crossing caribou.

Baffinland’s legal counsel suggested that the government of Nunavut might have been more certain about the North Baffin caribou had they made better use of Inuit Qaujimajatiqangiq: “the Inuit know a great deal about the caribou, “ said Baffinland. “And surely you accept the validity and importance if IQ.” Inuit Elders say that caribou populations surge and decline according to a 60-70-year cycle, but no one knows how their habits or distribution might change in the meantime.

For the near future, QIA tried to secure a ten-year commitment from the government of Nunavut to participate in its proposed terrestrial and marine environment working groups monitoring the environmental effects of the mine. Lands director Stephen Williamson Bathory said the combined effects of harvesting pressure, climate change and Mary River, and the broad range of the North Baffin caribou herd make it a territorial issue. Hale wouldn’t commit, but said he would participate as long as human and financial resources allow.

Hale also said Baffinlad downplayed Mary River’s effects on polar bears in its FEIS. Given that up to six icebreaking vessels could be using the Foxe Basin shipping route at the same time, polar bear movement and habitats are likely to be affected, and according to Environment Canada, Baffinland underestimated the extent of . Hale recommended that Baffinland report all polar bear sightings along the shipping route. As for long term studies on changes in polar bear behaviour, Hale said that should be up to QIA’s proposed marine environment working group.

Though Environment Canada expressed concerns in general with the lack of ecological baseline data, such as seafloor organisms in order to determine ballast water’s effect on the underwater ecosystem, it conducted specific studies tracking the distribution of migratory birds in the Hudson Strait and determined they might be attracted ship’s lighting, and therefore be at a greater risk for ship strikes. The agency suggested Baffinland equip its ships with bird diverters and monitor direct and indirect impacts of shipping.

On cross-examination, Baffinland pointed out it supported that research, has agreed to air quality monitoring at Steensby, and is supporting further Environment Canada bird studies already.

The department of Fisheries and Oceans criticized many of Baffinland’s conclusions in the FEIS, including:

a) its unprecedented choice of shipping route,

b) its assertion that the 17.1 million cubic meters of ballast water emptied into Steensby Inlet every year will not affect the seafloor organisms,

c) its choice of thresholds DFO considered too high,

d) that interactions of icebreakers with marine mammals will not produce any negative impacts,

e) that ship tracks through pack ice will not significantly affect the movement of marine mammals,

f) that ship noise will not permanently affect marine animals,

g) that ship strikes are unlikely, and

DFO concentrated heavily on the studies it conducted on the likelihood of ship strikes while the ship travels through marine mammal communities in the Hudson Strait and Foxe Basin, as well as the effect of shipping noise on mammal hearing. It said if Baffinland doesn’t reduce its shipping speeds in both the ice-covered and open-water season, shipping activities will likely kill approximately 14 belugas, 40 narwhals and five bowheads every year.

Baffinland countered that it has already developed five new monitoring plans that DFO did not acknowledge in its presentation; DFO said the plans need more development. Then Baffinland legal counsel Brad Archer questioned DFO representative Derrick Moggy on some of the studies that the agency conducted to arrive at the numbers of struck whales annually.

Baffinland says the model is not scientifically recognized—was taken from the internet—and that it assumes that animals don’t move out of the path of an approaching ship. “I’m going to suggest to you that the likelikhood of these numbers you arrived at of whales being struck, by a formula taken from the internet, doesn’t allow animals to move and doesn’t account for speed,” said Archer. “I think it’s not fair to the whales to assume that they don’t move when a ship strikes, don’t you?” DFO resercher Jack Lawson defended the model, saying “the fellow who created the model is quite reputable,” and that the point of modeling ship strikes using any method was to show that the possibility of marine mammal ship strikes is definitely not zero, and probably not insignificant. “Our bottom line has always been that there remains the possibility of a vessel strike.

DFO maintained that ship monitoring methods needed to be improved, vessel speeds lowered and better baseline data compiled to assess how a massive icebreaker schedule that triples ship traffic in previously undisturbed waters will affect the animals there.

When QIA asked how DFO sees the marine environment working group operating most effectively, Moggy said clear goals and timelines need to be established. Like the GN and Environment Canada, he declined to agree to a ten-year commitment.

In addition to the marine and terrestrial environment working groups, the government of Nunavut recommended that Baffinland develop a monitoring plan to
conduct surveys in the affected communities and determine how the Mary River project affects housing, in- and outmigration, domestic issues, crime and substance abuse—all of which were separately discussed in the GN’s technical presentation. Pressed for progress updates on the Qikiqtaaluk Socioeconomic Monitoring Committee—which will be necessary before a project certificate can be issued, and which will include QIA, the GN and AANDC—the GN said only cryptically, “With respect to this question and the recommendations, the part about the monitoring framework in the project certificate, this is one section that the government of Nunavut is looking to revise.”

“Any clarity that the government of Nunavut can provide,” said NIRB chair Ryan Barry, “about how it would envision Q-SEMC with project specific monitoring committees and potential project certificates would be helpful for NIRB as well.”

On a coffee break, a man from Pond Inlet grabbed my arm and pulled me aside. “I’m so ashamed of my government,” he said.

Transport Canada also presented on new international standards on ballast water treatment that Baffinland will follow, the Canadian Coast Guard talked about its limited capacity to respond to accidents in the open water and ice-covered seasons, and Natural Resources Canada, the Canadian Transportation Agency gave final technical presentations as well.