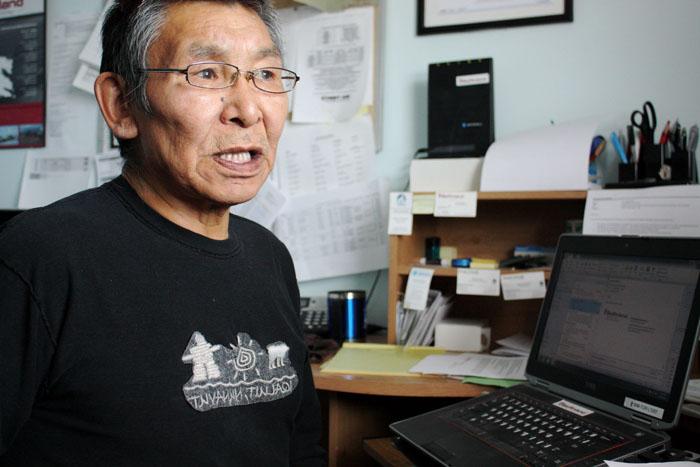 BW: You’ve been mayor of Igloolik since January. Can you tell me a little bit about your background?

My real profession is interpreter-translator—I had a private business as an interpreter-translator in Iqaluit—but I’ve been many things. I was executive assistant for the Baffin Region Council, I worked in Ottawa as an assistant editor for an Inuktitut magazine and as an interpreter for ITC, also when I lived down south. In Igloolik, I was economic development officer, president of the Co-op and was vice-deputy mayor some years ago. And I’ve been Baffinland’s community liaison officer here for five years now.

BW: And what are your responsibilities as a Baffinland liaison officer?

To keep the community informed, but right now nothing is really going on. Baffinland is still going through the process of environmental review, there are the final hearings, and so right now it’s pretty quiet. My other responsibilities are to work with the economic development officers and Qikiqtaaluk Logistics to get people hired. Right now, Baffinland is in partnership with Qikiqtaaluk Logistics, and QL’s responsibility is on the employment side of the mine. They hire people for the mine. So for anyone who wants to work at the mine, right now, I submit their application. Give it to me and I’ll send it off to the appropriate place, which is QL, and they decide who is going to work.

BW: So that means if there are job opportunities for pre-construction on the Mary River site, Baffinland puts up a notice in the community saying “we need this many workers, show up at this time,” and you screen the applications?

Okay. That’s not happening. That’s the thing, Baffinland liaison officers have been talking about that. Like QL is a hiring entity for the mine, but they don’t put out what jobs are needed at the mine. They decide in Iqaluit who’s going to do work and we don’t see the job opportunities being shared at the mine.

BW: How many Iglulimmiut are working at the mine right now?

BW: And how many people work at the mine overall?

I cannot tell you that because I don’t know. But Baffinland is still in the environmental study stage, therefore they don’t hire that many people. They’ll hire maybe a driller or two drillers, for samples, or archaeological study assistants, marine study assistants. But hopefully by next year, we’ll be running out of manpower because once the construction starts, it’s going to be very busy.

BW: What other opportunities will be available for Iglulimmiut who don’t work directly in the mine, as a result of Mary River?

Well, for example, someone could start a Laundromat here right now, Right now, the mines are sending their laundry to Montreal or Iqaluit. You know, things like that. We have to start thinking, there’s a mine coming. Let’s get something started here that it could use—like the Laundromat or catering, things like that.

Mind you, we are pretty prepared in some ways. We have trades people in town who are qualified, we have heavy equipment operators that are certified, and our economic development officer is currently working on getting more training for, I think, ten additional heavy equipment operators. The difficulty is, business…. What we need to do more is go to the radio station and encourage people to start something. You don’t necessarily have to work over there to benefit. But this community has to wake up and really think about starting a business.

BW: What did you notice were some of the biggest challenges to that as an economic development officer here?

The difficulty I had back then—and even today I think it’s happening, even today—people would come with enthusiasm to start a business. So that brought my spirits up, you know? You start helping them and you’ll make the plan with them, and tell them, “here’s what you need to do for your business.” And they don’t bother showing up after that. That was challenging and also disappointing. That they seem enthusiastic at first, but when the real work starts, they just don’t show up.

BW: Why do you think that is?

With all due respect, this community, like any other community, is a community where people are so used to having things done for them that it’s almost like they’re waiting for someone else to do it for them. That’s discouraging! It’s getting very frustrating for me. Maybe I’m being negative here, but that’s the way I see the community right now. Waiting for somebody else to do something for them. When in fact, they should be going forward on their own to benefit from the mine when it’s in operation.

BW: Has Baffinland started training workers in the community?

Okay, I’m going to put on my mayor’s hat here. My idea is that, instead of saying “gimme gimme” to Baffinland, we should start saying, “here’s what we have in this community: we have heavy equipment operators, we have drillers—let them know what we have. I promise you, they will be hired during the construction season. I don’t want Igloolik to become like a “gimme gimme” community. I want Igloolik to be able to offer. Use what we already have in our community, and they decide.

BW: What responsibilities do you think Baffinland has to the community?

One of their responsibilities will be to hire people. And there was a suggestion made by the hunters here. They’re thinking about starting a fishery. There was a suggestion made that they should be given a certain amount of money to acquire a ship big enough for commercial fishing. Another concern has been housing. The way it is right now, if there are two people working in a household, they are both charged, I think, 70% of their income. And that barely results in actual take-home pay, because all of their money is going to the Nunavut Housing Corporation. One particular person I know is a qualified mechanic—heavy equipment operator. When he worked for the hamlet, his rent shot way up and he couldn’t afford it anymore. He had to resign from his job. So we suggested maybe Baffinland could consider building houses here to be used by their workers. Eventually they will become the homeowners—live in the houses, like rent-to-own, more or less. So there was talk of Baffinland building houses for its employees.

Those are the two main items that I have heard about in terms of what are people getting in return?

BW: When will the communities know what’s in the IIBA?

BW: Is that frustrating?

No, no…. Maybe just to an extent, It would be great to know, but the rules are, not while it’s being negotiated.

We wait patiently in trust for the negotiators.

BW: Everybody in the hamlet who voted for you, they knew that you worked for Baffinland. Do you think that says anything about what the community wants for its future?

Well, the way I see it is this: you have to be able to separate yourself sometimes from Baffinland and concentrate on the hamlet. And there are also times, like during the daytime, when I keep myself separated from the hamlet and work for Baffinland. In my positions, as a CLO for Baffinland and as mayor, I have an…if I can use the word, ideal position. The way I look at it, Baffinland needs Igloolik for employment and—same thing—Igloolik needs Baffinland for employment. That sort of puts me in the middle, as a mayor, wanting the people of this community to be able to acquire jobs, to be able to work and become independent, you know, rather than relying on welfare. They need jobs.

So their needs fall right into Baffinland’s. Their needs will be fulfilled by Baffinland by way of employment and other business possibilities.

And in turn, Baffinland will need workers. They will need Igloolik for people to work in the Mary River project. Some people would disagree, but I see myself to be in a unique situation. So I don’t see a problem with that, working for Baffinland and being a mayor, because I see them as intertwined, you know.

I’m able to put on my hamlet hat when I need to, totally avoiding Baffinland, and also, on the majority of days, wear my Baffinland hat.

However, as a mayor, if any discussions about Baffinland are going to be discussed at the council, I have the common sense to declare a conflict and totally stay away.

BW: How does that work, when there’s a hamlet meeting and you have to declare a conflict?

Well I prefer not to be there altogether. If it’s going to be about the company that I work for, then if I stay, I might end up interfering. I might take their side. So basically, if they’re going to be talking about Baffinland, I feel most comfortable totally taking myself away from that meeting. Declare a conflict.

BW: Does that mean that Igloolik doesn’t have a mayor when the council is discussing Baffinland?

It’s an awkward situation to be in. Again, I would have to declare a conflict. But that doesn’t worry me, because I have confidence in the council to represent the community. So. That’s the name of the game.

BW: Have you been contacted by any other mining companies recently?

Yes, we have been in contact with Roche Bay mining in Hall Beach. We also have been contacted by West Melville Metals. They are in the process of doing sampling.

BW: And you think those projects will be good for the community as well?

Well, looking at Igloolik, with a population at 2,400 and increasing, there’s a pitiful economic development industry in this community.

There’s nothing! At least three quarters of the people here are unemployed because there’s no economic base. I supported the Stornoway diamond project because it would create much-needed employment. And as a mayor, again, I’m fully supporting Mary River for the benefit of this community.

You know, the thing here is that—and it’s really troubling to me—there is no economic base. Nothing! And people depend on income support and welfare. Young people, relying on income support, welfare. And I’m sure many of them don’t want to be on welfare, but the thing is, they are trapped. There is no employment. The Mary River project will create long-term employment for the people here; for our children. It’s a chance for people to get off welfare and get working, you know, get their pride back.

There’s no economic base in this community, and it’s been going on for so long, it’s almost beginning to become an accepted fact. That’s troubling. Our young people who graduated last year, they are applying for work through QL, but because there is no employment yet, they go on welfare. I know we have young people, willing-to-work people out there and they are trapped because they’re on welfare and there’s no employment. That’s troubling, and right now, our hands are tied.

Baffinland is the most studied proposed project. Five years of study. It’s the first mine in Nunavut that’s ever gone through such a study. It’s almost ridiculous, but that’s the name of the game, that’s the Land Claims Agreement. It’s the first proposed mine that’s gone through five years of study, so environmental study, sea mammal study, community consultations, you know, this is the most studied proposed mine in Nunavut, ever. It’s ready.