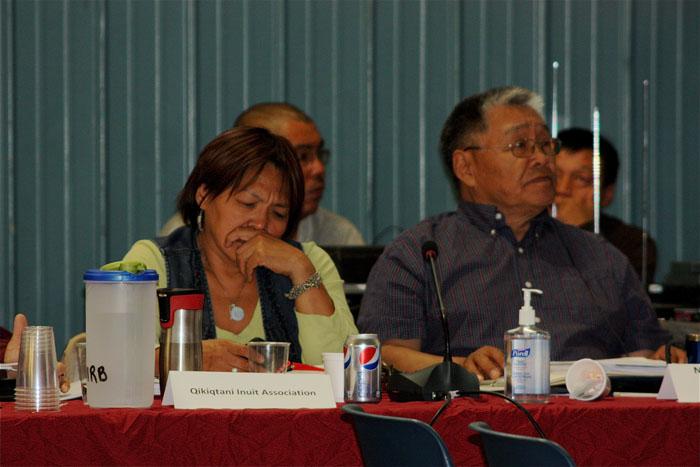 In contrast to NTI’s nine-minute contribution to final hearings on the Mary River project (NIRB allotted 20 minutes for its presentation), QIA took a thorough, critical and aggressive stance in its hearing presentation on a number of issues, such as socioeconomics, impacts on land and marine mammals, ballast water, the port at Steensby Inlet, Inuit participation in community-based monitoring, the need for efficient and committed joint Baffinland-QIA working groups, ore production rate and archaeological resources.

QIA president Okalik Eegeesiak introduced herself by name and E-number and gave a short history of Nuluyat (the Mary River site) in Inuktitut, which she said means “mountain of ore” and has served as a navigational aid to Inuit, directing them from the flatlands of the South Baffin region towards the mountains and glaciers of the North—“a point of transition for Inuit.” At some point NIRB chair Elizabeth Copland asked Eegeesiak to shorten her speech in the interests of the belated agenda, but she refused. “Baffinland had its time,” she said. “I’ll finish my speech.

Eegeesiak pointed out the enormous effort and expense to carry out years of community consultations on the project—correcting an apparent misconception that Baffinland actively funds the seven Mary River project committees in potentially impacted communities—and reiterated NTI’s assurance to Baffinland that “we are not against mining. We don’t want to see us go back…. This is central to the Nunavut Land Claims Agreement and QIA, but we don’t see industrial development as an automatic solution to the very real problems that exist in our communities.” She then handed the microphone to QIA director of lands Stephen Williamson Bathory, who stressed QIA’s concern that Baffinland include Inuit in all aspects of project monitoring, both physical—literally watching elements of the project—and through serious, committed joint working groups on the marine and terrestrial ecosystems and socioeconomics.
While QIA maintained its stance that the Steensby port site may be the Baffinland’s most viable option, it objected strongly to the overwintering of fuel there in a vessel locked in ice: “It goes against the desires of the Inuit,” said Bathory, asking Baffinland to conduct a standalone meeting during in Igloolik on the subject during the final hearings.

Though Baffinland conducted a June 18 risk assessment workshop with Transport Canada, the Canadian Coast Guard, DFO and Environment Canada on overwintering a fuel vessel at Steensby, QIA recommended additional community consultations and a reassessment that includes winter condition fuel spreading patterns and the impacts of fuel if it doesn’t quickly evaporate, as Baffinland expects it to.

In its question period, Baffinland’s legal counsel Brad Archer objected that overwintering of fuel storage is closely regulated under the Canada Shipping Act, and that the legally required risk assessment has all been done by Baffinland. “I just want to confirm with you that you’re not asking NIRB to begin to regulate this area,” Archer said. “This is an area already regulated under the Canada Shipping Act…. I just want to make sure you’re not asking NIRB to step in and create its own regulations.” Bathory responded that QIA would still like to see continuous posted security at the port to monitor the fuel storage vessel throughout the winter.

QIA also had strong recommendations for Baffinland regarding ballast water; namely, it asked the company to conduct a more thorough risk analysis of ballast water discharge, instead of Baffinland’s current plan, which is to wait for Transport Canada to issue guidelines for its ballast water treatment system in early 2013.

Archer challenged QIA on this point too, saying, “We should trust our government’s guidelines. For ballast water, I’m wondering if we can trust Transport Canada’s regulations, because that’s the only regulation we really need, isn’t it?” Bathory responded by saying QIA had hoped the selection of treatment techniques might be the subject of a marine environment working group discussion, given that ballast water standards don’t yet exist.

Baffinland also contested many of QIA’s claims, in its slide presentations, that the company made certain commitments, such as video surveillance on the railway. Bathory apologized and amended the wording.

The government of Nunavut also questioned the commitments requested of it, pointing to QIA’s statement that “all partners in monitoring must commit the human and financial resources necessary to sustain [socioeconomic benefit] efforts over the life of the project.” Since the GN would become a partner in monitoring under the IIBA, and the IIBA will specifically address Inuit training, the GN was concerned that QIA sees it as a source of funding for mine-related training and cultural education. Bathory confirmed that QIA would not look to the GN for funding in this area, but perhaps to the communities for funding.

In addition to its presentation, QIA also submitted its list of draft project certificate recommendations, should the project go ahead.
AANDC and the Nunavut Land Planning Commission also presented yesterday. AANDC will oversee reclamation procedures upon closure of the Mary River site, and the Land Planning Commission will conduct an internal review of Baffinland’s proposed rail route to determine whether to approve an amendment to the Baffin Region Land Use Plan.

Intervenor presentations from the 10 remaining intervenors are expected to finish by the end of today’s session.