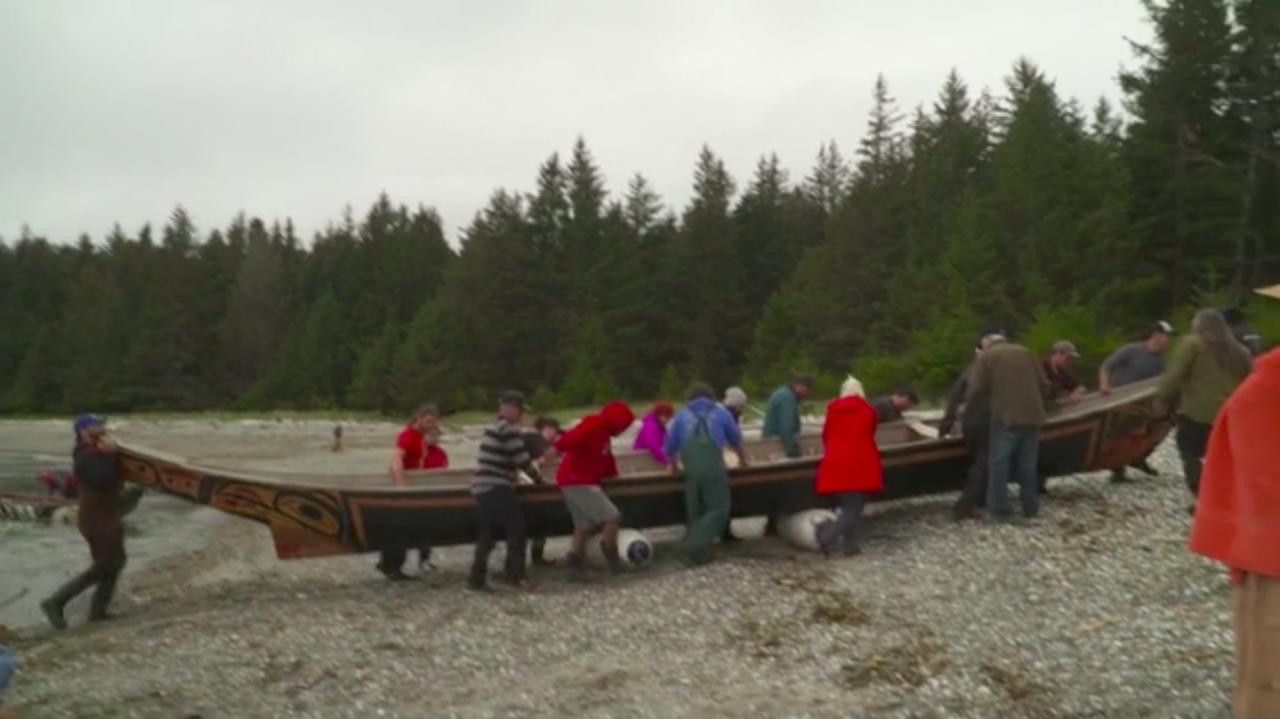 Film as a catalyst for Indigenous community development

For the past decade a small group of scholar/practitioners have been exploring the potentials of film/video as a planning intervention in a variety of contexts (Sandercock and Attili 2010). One example documents the use of film as a therapeutic intervention in the context of a deeply divided community (Sandercock and Attili 2012, 2014). Currently, a partnership between the Haida Nation, the Inuit film production company, Kingulliit, and Leonie Sandercock (Indigenous community planning, University of British Columbia) is exploring film as a catalyst for Indigenous community development with the Haida Nation. This brief essay discusses this work in progress.

The Haida people have inhabited the remote island archipelago of Haida Gwaii, 100 kms offshore from Prince Rupert in northern British Columbia, since time immemorial.
By the early 20th century, the impact of European diseases and government policies of assimilation had reduced the Haida Nation from 25,000 people, pre-contact, to just 580 survivors. Once residing in over 300 villages around the extensive coastline, the Haida were confined by the early 20th century to just two small reserves (today known as the villages of Skidegate and Old Massett) and their sovereignty was erased by the still-extant Indian Act of 1876. Haida culture and language faced the threat of annihilation by mid-20th century. For the past fifty years or so the Haida Nation has been politically resurgent. But the struggle for economic, cultural and language revitalization is ongoing. Geographic isolation, lack of opportunities for youth, and inundation of western media compound the challenges of revitalization.

In 2012 the Indigenous Community Planning program at the University of British Columbia (UBC) began a four-year relationship with the Skidegate Band Council on a Comprehensive Community Plan (CCP) process. Among the highest priorities identified through the CCP process were language revitalization, the creation of jobs that would keep youth on Haida Gwaii, and protecting the land and waters of Haida Gwaii through sustainable development.

A conversation ensued between Leonie Sandercock and the Skidegate Haida, and then with the Council of the Haida Nation, about the possibilities of making a film (by and about the Haida, and in the two Haida dialects) that might serve as a support for all three of these objectives: the ongoing work of language revitalization, a catalyst for job creation in the 21st century digital economy, and protecting the land and waters. Could film be used in the context of community development to serve these Haida aspirations?

We were initially inspired by the success of the Inuit film production company, Isuma, in making feature films in the Inuktitut language that showcase Inuit culture and employ Inuit as actors, costume and set designers, writers and directors. A three-way partnership was formed in 2013 between the Council of the Haida Nation (the overarching Haida governance structure), an Inuit team from Isuma Productions (now Kingulliit Productions), and Leonie Sandercock, from Indigenous Community Planning at UBC. We successfully applied for a Social Sciences and Humanities Research Council Partnership Development Grant and began work on this project in May 2014.

We describe this as a community-based and community-driven action research project which aims to support Haida Nation aspirations by designing, implementing, monitoring and evaluating the effectiveness of a community-based feature film and multimedia project that is intended to generate locally relevant and sustainable solutions to current challenges.

The Skidegate Haida Immersion Program (SHIP), a group of Elders who meet daily over the two school semesters each year to document and preserve the Skidegate Haida language, also partnered with Kingulliit Productions and UBC on this language recovery project, as part of their Haida Language Revitalization Plan. The Haida Nation regards their language status as in crisis, given the diminishing number of fluent speakers. Their 2006 census showed that 10% of the population were fluent Haida speakers. But by 2016, less than 1% are fluent, and of that 1%, the vast majority are between 75 and 95 years old. The Haida are concerned that there is not enough interaction between these remaining fluent Elders and younger community members to support long-term language revitalization goals. Intergenerational transmission of the language is critically endangered, and opportunities for Elder teachings are increasingly limited, so the Haida Nation welcomed the concept of the film project as, in part, a social enterprise with the goal of saving the Haida language. This project provides people with access to audio and video tools to preserve and regain language skills, and creates links between Elders, parents and children by using existing and new technologies to encourage reading and speaking. And the film itself adds motivation and inspiration for young people to learn the language, by bringing Haida language into the popular culture.

Further, the Haida Nation regards the digital media and film industry as a sustainable approach to support a green economy and aligns with traditional Haida values to protect the natural beauty of the islands. For the past hundred and more years, European settlers turned Haida Gwaii into a resource-extraction based economy, dependent on logging and commercial fishing, along with some government jobs, and service industry employment connected with tourism. The Haida Nation aspires to self-sufficiency and wants to support community initiatives that provide work experience and new opportunities for youth. So the idea of the film and multimedia project was seen to support the three core Haida aspirations noted above, as part of a transition to self-determination.

Working with two Haida partners, Dana Moraes in Skidegate and Lucille Bell in Old Massett, we co-designed and facilitated a series of community-based story gathering workshops in which community members were asked to suggest what Haida story or stories they would most like to see portrayed in a feature film. These were followed by script-writing workshops in both villages, and a writing contest, in which members of the Haida community were invited to submit a short story/film idea. The three winners - Jaalen and Gwaai Edenshaw and Graham Richard – then worked with Leonie for 6 months in the co-development of the feature film script, ‘Edge of the Knife’.

The script was submitted successfully for production funding to the Canada Media Fund (CMF) by our Inuit partner. Elders in Skidegate and Old Massett then translated the script into the two Haida dialects (Xaad kil in Old Massett and Xaayda kil in Skidegate). The Inuit partner worked with the Haida in creating a majority Haida-owned film production company, building on the Nation-to-Nation learning and knowledge transfer that has been foundational to this project. Pre-production began in early 2016, with the hiring of two Indigenous co-directors, Gwaai Edenshaw (Haida) and Helen Haig-Brown (Tsilhqot’in, living on Haida Gwaii with her Haida partner). Gwaai and Helen ran casting workshops and auditions in the two Haida villages, following the Isuma model of working with untrained community members. The cast have been learning their lines with the help of the fluent Elders. Two Haida were hired as Production Managers and more as set and costume designers and builders. Filming is scheduled for May-June 2017, with a budget of $1.89m (Canadian).

In creating the story, the writing team worked under two important Haida guidelines. The first was that the story should be roughly balanced between northern and southern dialects, to encourage people in both communities to learn their respective dialects, and to have a film that showcases both. The second was that the story should showcase traditional Haida culture and technology, such as longhouses and canoes. The writing team worked closely with Elders and knowledge holders from both villages, from whom they sought advice about specific scenes (such as a ceremony to welcome the first salmon caught for the season), and these knowledge holders read each draft of the script and ensured cultural accuracy and sensitivity.

Because the film is not yet finished or released, it is too soon to talk about the impact of this project on the Haida Nation. We can say that $800,000 worth of employment is coming to the two Haida communities during the production, and a considerable amount of capacity-building is happening, thanks to the UBC and Inuit partners training the Haida in various aspects of film making, including financing, management, and logistics, as well as script-writing, directing, and cinematography.

The medium and longer term intent is that the existence of the film itself, and the fact that it is made in the Haida dialects with English subtitles, will generate interest especially among youth in learning the language. It is our hope that the film and the film script will be developed into a one-month language module for the high school, and that teaching and learning relationships between Elders and youth will be sustained beyond the end of the film production. In follow-up monitoring and evaluation after the completion of the film, the intent is to feed into the evolving language revitalization strategy of the Haida Nation, taking a critical look at whether the making of a film telling a story in the language of the community is an effective approach to language revitalization. The other hope is that there is sufficient training during this project for the Haida themselves to be able to continue to generate film projects, under their newly created film production company, with a group of young writers energized and inspired by this project.

While the primary beneficiary of this project is the Haida Nation and community members, it may also inspire other Indigenous communities to imagine ways in which they can use film as a means of language and cultural revitalization. We plan to do extensive Indigenous community outreach for coastal and northern communities once the film is completed, sharing not only film screenings but, equally important, the community development process through which this project was generated in the first place. Our hope also is that sharing this story with the planning profession and planning educators, locally and internationally, will contribute to re-thinking how to work with Indigenous communities to support cultural revitalization and self-determination, as part of a larger mission of the Indigenous Community Planning program at UBC of contributing to the decolonizing of planning.
.
References
Sandercock, L. & G. Attili. Eds. 2010. Multimedia Explorations in Urban Policy and Planning. (Heidelberg: Springer)
Sandercock, L. & G. Attili. 2012. ‘Unsettling a Settler Society: film, phronesis, and collaborative planning in small-town Canada’ in B. Flyvbjerg, T. Landman & S. Schram. Eds. Real Social Science (Cambridge: Cambridge University Press)
Sandercock, L. & G. Attili. 2014. ‘Changing the Lens: Film as Action Research and Therapeutic Planning Practice’, Journal of Planning Education & Research, 34, 1: 19-29.

1 Leonie Sandercock is a professor and chair of the Indigenous Community Planning program in the School of Community & Regional Planning at UBC, and a scriptwriter and documentary film maker. Dana Moraes is the Community Planning Coordinator for the Skidegate Band Council and a Production Manager for Edge of the Knife. Jonathan Frantz is a graduate of the SCARP Masters program, a producer and director of photography with Kingulliit Productions, and is the producer of ‘Edge of the Knife’.

2 A Masters degree specialization in the School of Community & Regional Planning at UBC.

3 The film draws its name from a Haida saying, "the world is as sharp as a knife" - that as we walk along we have to be careful not to fall off one side or the other. This is the world we live in - so close to nature, our lives always hanging in balance - one slip can change everything.