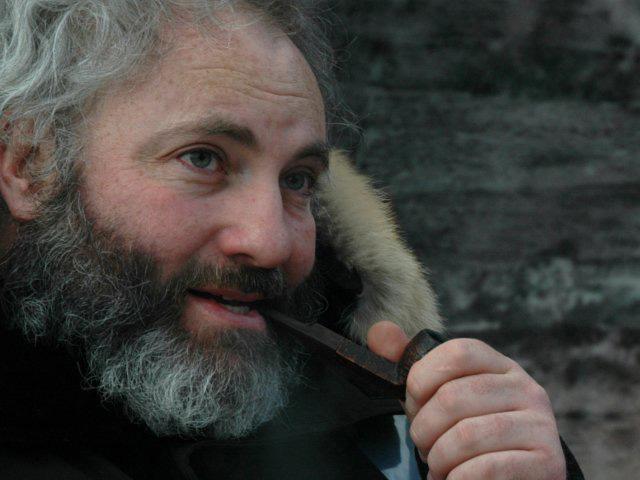 Well, I normally start by going to the highest point in every city so I can have a view of where I am. When I arrived, I walked up to the stone sculptures inukshuks, up here on the hill, and looked out on the whole town and it’s very beautiful. I get so calm. It’s like I’m here and no where else! So I think the town is to be here. I like those kind of feelings because we have to be a family here, being so close. You feel so little when you get to this vast space, so feeling that you’re welcome here makes me very happy.

Many many years ago, I was a sportsman. I knew that athletes in the 100m and long jump have a limited lifespan. Then they have to find something else to do. I found out then that I loved to tell stories and then when I was 19 years-old I went to acting school in Denmark. It was there that I discovered this medium called film - so I joined that when I was 24 and since then I’ve done film.

In Denmark we did great movies, I was very fortunate to get on board with some great projects when I first started. The first film I did was a thriller called Night Watch and then after that I did underground projects with people I knew. We worked out a new system of how to make movies. It went very well. I’ve worked in Norway and England, so I’ve worked on many, many projects.

How did you get involved in this film?

Elise, who is the producer from Denmark, I’ve know for a long time because I did my second movie with her, before she was a professional producer. I really loved her so I said to her ‘I will always join you’. When she was at school, I went to do her student movie as a professional. wass great to work with people who haven’t done that many movies before because they have a fantastic energy. So when she called me and told me about this project. I had no doubts about saying yes to it. It seems as though this has the same energy as when we first started. So I got involved because I knew one of the producers. Then I saw the first movie Isuma did – The Fast Runner– and it was so fantastic and deep, I wanted to meet these people.

Have you made any preparations for the role?

I’m always doing a lot of preparation on myself; going into feelings, goind into the mind. I use my body a lot and my beard and hair - they work for me. I take a lot of time going into the mind of my character. He (Peter Freuchen) had written a lot of books, so I’ve been reading his books and trying to find out what is right and what is wrong (laugh). Because when people write about themself, maybe they’re romanticizing, but Peter is a very good writer. He’s a very funny writer, he doesn’t seem too bored when he’s writing. So, I got a lot of stuff from him and I asked people about him. But most of all, I want to work with my feelings and my own experience of how it is to meet other people, how to go and meet the nature like this here in Igloolik. I’m living in the woods in Denmark so I know the feelings that relate to nature. I’ve been working a lot with that.

I’m in the middle of it! (laugh) I have 14 days until I shoot the movie so I’m here to find the missing pieces. I play a character who, as myself, I find very easy to play. It’s almost type-casting because I’m a person who can be everything. This character is very open-minded and a very charmed person. He likes to meet different people and being calm at the same time. He’s very grounded. The people felt that and gave his a lot of love and respect for being himself and not playing games. He’s just being himself and I really like that.

(Laugh) I think people are so different, and we have to be different and we will work different. To be an actor means to be in yourself sometimes and to use yourself and experience. I’m always saying ‘go out and live life and gather experiences and if you dare to use your feelings even if it’s bad or wrong or good or sad or happy - you have to use it and show it. You have to train to do that because it’s like being a kid again in kindergarten. Those things are very good for acting, because when you get older you lose that sense of discovery. So you have to train to be not so grown up.

Any plans for after this film?

Yeah, I’m looking forward to a project in Newcastle, England. I make a lot of gangster movies. I love that, it’s very funny. I’m in the middle of that. There’s a few manuscripts and some other stuff which is waiting for me.