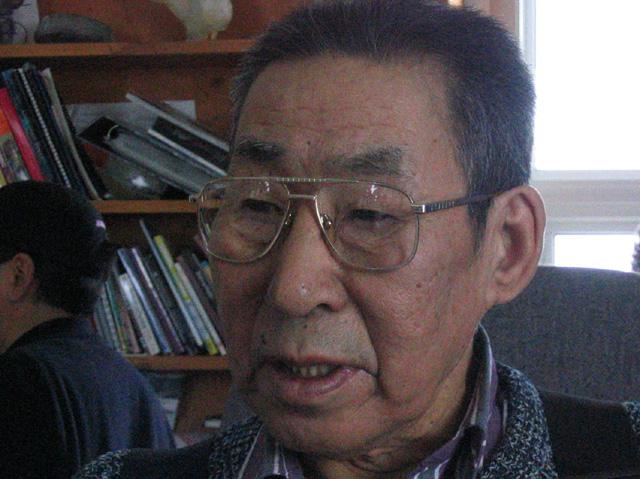 I am Louis Uttak. I used to be known as Alianaikuluk. I bear my father's name. I was born in 1937.

What is your job title?

I am the Art Director, procuror of artifacts. Things I used to see in the past. Things like food, clothes, qulliit, igloos, many things.

You've seen all those things?

Oh yes. I've seen them all – and no wonder, I've been through that period!

Can you tell about things that you used to use in the old days?

The things we don't have now are the dog-teams, which we used to have. Aua's igloos are not exactly the style we had. We used to feed the dogs by the entrance. We feed them two at a time in the porch. Sometimes we fed them four at a time. We had levels for our floors, the lower, the higher. We had food on the pantry shelf. Many things, like drying racks. Everything.

You recently made Aua's Igloo Palace. Were igloos made like you made them for the film?

No. We only had two attached igloos, the father's igloo and that of the son or the son-in-law. The main igloo was for the parents and the outer chamber twas for the he young couples. Aua's igloo is more in the tradition of those in the Naujat area.

Do you remember putting frozen meat in the igloo porch?

Yes. I remember them so well. I'm imagining them right now. Eating at the porch... the food was so good. Chopping frozen meat with the axe and then meat chips would fly off. We would step on them, even the fatty pieces. Then our kamiks would get soiled with fat. We were Inuit after all.

On the set, there is a lot of meat in the igloo porch. Did you have so much meat sometimes?

Yes. I am originally from the Igloolik area. I know the seals, the walrus. There was much caribou around here at the time. No caribou, but we had a lot of food in Igloolik. Fresh walrus and seals. That's mostly what we had in Igloolik.

Is it sometimes hard to find or make some Inuit artifacts which are no longer made? Anguvaq and the like?

Yes, it's very difficult now. The qulliq (seal oil lamp) is not so hard. The hunting implements for the large mammals are difficult to make. The avguvigaq, the pisisik, agligait for instance. What we know of aqligait we know only through the oral tradition. The anguviaq for walrus I have seen before. The ones we have are like the ones I used to see, they are fashioned for a walrus hunt.

I have only heard of them. The are used for launching projectiles, for mammals even caribou. They are used to launch spears, not a bow. Launching as opposed to bow and arrow.

Are they still used in Greenland?

I don't know. I haven't seen it in their props. I have seen some of their props and some are a bit different. Some are exactly same as ours. The weapons for walrus are very similar. Their style is just different. The purpose of the weapon - the fact that it is made for walrus hunting is absolutely clear. Very clear.

Is your work progressing well?

Are there times when you can't do things you would like to do?

The weather is our only boss. It will be our leader and we follow. If the weather remains bad, it will be very unpleasant.

How did you get selected for your job?

I told people at Isuma that they made a mistake when they offered me this position. I said "you are mistaken." Then they said to me, "No there is no mistake." They offered me the job because I am not intimidated, I speak my mind, and I know the Inuit way. That's why I'm here.

This film will have a great impact on this community. How do you feel about it?

I feel a lot for it. The story of Aua will be filmed. Tikilik [Mathiessen] and Kunuti [Rasmussen] also. This will be seen all over the world. Because of that, you really want to do a great job. Many things are already nearly finished: the igloo palace, the ship and Sakortirunik [Cleveland's] trading post. They are almost ready.

Sometimes it's very difficult and other times a lot of fun. We work and it goes so well that's pleasant. Then we run into some kind of problem. Then that's very unpleasant for me. It goes much like that - it's great until we come to a problem. Then it's a challenge. That how it is.

What are your plans after the end of production?

June 26 is my final day of work. Even when the production is over, there will be many things to sort. Many, many props that I will have to deal with. Props and who they belong to. That's what I'm going to be dealing with.

I will definitely go hunting. It's what I do. I'm really a hunter. I'll go but only when I'm done.