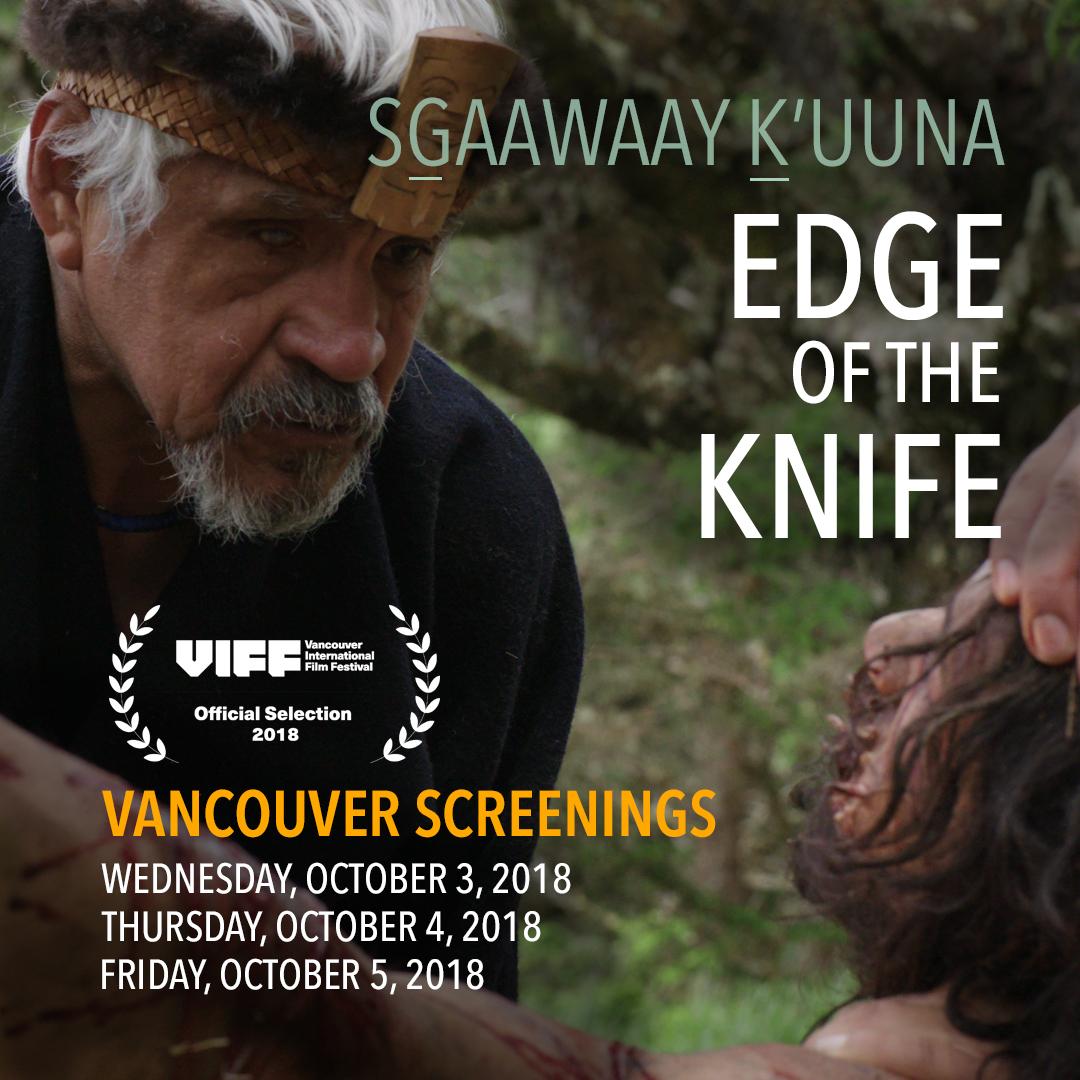 MONTREAL (September 18, 2018) - Isuma Distribution International is pleased to announce feature film “Sg̱aawaay K’uuna (Edge of The Knife)” will have three screenings at the Vancouver International Film Festival on October 3rd, 4th, and 5th, 2018.

Co-directed by Helen Haig-Brown (“The Cave”, “My Legacy”) and Gwaai Edenshaw, “Sg̱aawaay K’uuna (Edge of The Knife)” is the first feature film created entirely in the Haida language.

The premiere on the 3rd will include a red carpet event where directors will be joined by key cast members, community members and producer Jonathan Frantz.

On the islands of Haida Gwaii off the coast of British Columbia, in the 1800's, two families re-unite at their summer fishing camp. Soon conflict between a charismatic young nobleman, Adiits’ii, and his best friend Kwa, tears their interwoven families apart.

When Adiits’ii’s recklessness causes the death of Kwa’s son, he flees into the rainforest. Wracked with grief, Adiits’ii transforms into Gaagiixid, a ravenous supernatural being caught between worlds. Now while the community hopes to restore Adiits’ii’s humanity, Kwa wrestles with his deepest desire - revenge.

[“Edge of the Knife”] “...challenges the cast to wrap their tongues around words they don't know…[but] their emotional performances overcome in a film stacked with stunning imagery, where the natural and mythical get tangled.”  -Now Magazine

With less than 1% of Haida being fluent in their ancestral language, “Edge of the Knife” was envisioned to support the Haida language, create local employment, and promote Haida culture by bringing an ancient Haida story into a new space using the medium of film.

The creation of “Edge of the Knife” required a community-led collaborative effort. It was inspired by Isuma’s community-based filmmaking model for indigenous-language media production.
In consultation with local elders, language and script workshops for participants of all ages were essential to the process, with a predominantly Haida cast and crew working on the production.

By promoting indigenous-language filmmaking and retaining community control over production, ownership and distribution, “Edge of the Knife” offers a unique example of the power of using contemporary media to strengthen and protect indigenous language, culture and community connections.

“Edge of The Knife” is the result of a unique 4-year collaboration between the Council of The Haida Nation, Skidegate Band Council, Old Massett Village Council, the University of British-Columbia, and Isuma Distribution International with Zacharias Kunuk as executive producer and mentor.

"Edge of the Knife" features traditional songs and new Haida compositions, as well as an original score by Kinnie Starr.