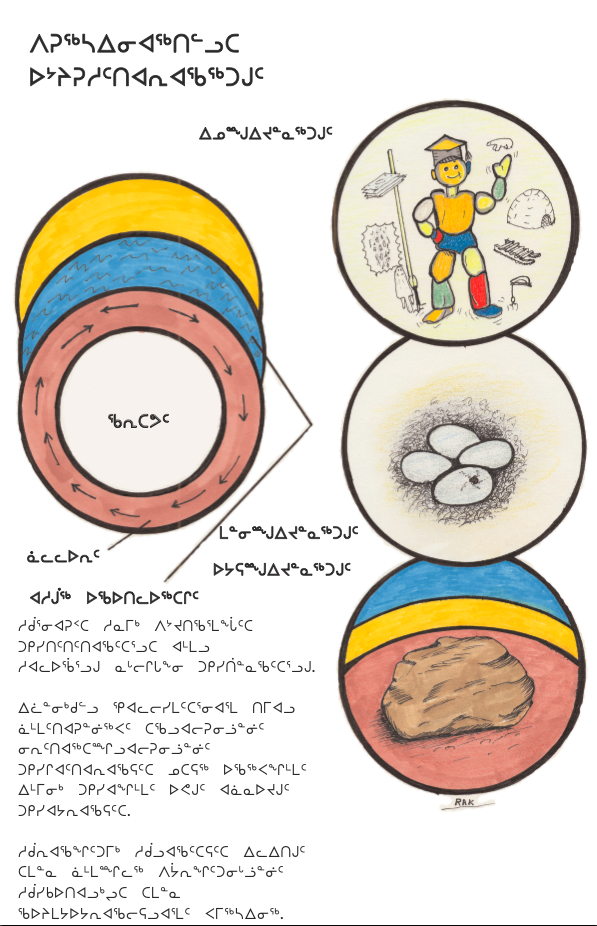 Rhoda Karetak: This is a presentation about the child who became a human being, a child who becomes a hard insensitive person and the child who is a lot like a fragile egg.  I put this together when I was still working here with C&SS, I was hoping it will help all those people who have to work with children or work in the field of education.

To help us all understand, how children are affected by their immediate environment, what ever they are exposed to can potentially have an impact on their lives.  So in the concept of Pilimmaksarniq, sometimes people can go too far by putting way too much pressure to a child, and can do harm.  And I would like to just use our own past history as an example to point this out, as it happen in our society.

The harden person; In the Inuit society, the concept of Pilimmaksarniq can be carried too far or not far enough, and when it is carried too far over, where an individual is exposed to extreme discipline and pressure, more than the rest of their siblings, by being told to do way much more chores, or all the chores, the child will not happy about this situation, constantly being ordered around by all those around them, and you could see this happens to some individuals in all our societies.

When the parent or guardian starts to scold them, all the others around start joining in, that is too much, it is not fair.  Then the scolding starts to get bigger, and instead of just scolding, it escalates to, being yelled at and maybe even being hit.  If a child gets yelled at or extremely scolded suddenly while they are too young to understand, they get shocked and stunned by this, and Inuit have a term for this situation and is called, “Quqqik” meaning the child is traumatized.  At first they stunned by this, but when they are exposed this kind of treatment over and over, they will start to become a harden person and no longer seemingly affected by the yelling.  Symptoms will start to show such as when someone is yelling at them, they no longer have any fear, and when someone tries to speak to them, they may pretend not hear the person speaking.  No longer having any fear, this person will become harder and potentially very uncooperative, like a rock, when Inuit people recognize these symptoms, that person would be known as someone who has been hardened and may become a very dangerous person when they grow up.

If you look at the background of this illustration, the blue and yellow colors is meant to show, there is always hope for someone, even ones who have been exposed to this situation.  Once you show patience, real love, and real understanding, he or she will be able to make changes to their lives, and they become whole again.  So I think we have to be looking out for signs and things which will help us recognize when we are teaching and training children, to make sure we don’t go too far over in Pilimmaksarniq, end up doing the opposite of what we intended to do, was enable someone to be successful.

This illustration is meant to show how we must always be training and teaching children to become human-beings, not to try and damage them.  Like the rock person, I would like to point out though a person has been made to become a rock person, the blue in the background represents blue clear sky and this means there is always hope, again once people are treated kindly, fairly, and with love and patience, they can turn their life around and become human-beings once again.

The fragile egg person has to be treated very gently, always have to be careful not to crack the egg, protected at all times.  This person becomes like this, when the guardian or parents are over-protective and keep going to the defense of the child, asking him or her questions like, “who mistreated you, were you hurt by anyone, has someone been mean to you?” In the old traditional way, this behavior towards our children and asking questions of this nature is absolutely forbidden.  As a mother, as I love my children a lot, makes it extremely difficult not to want and defend my children. But we must refrain from doing so, because the old people always say, you cannot be there forever, and be with them wherever they go, so it is not wise to make them think, you are going to take care of them all the time, be there all the time.

I don’t know all of the saying of the Inuit traditional knowledge of our culture, but I know and always have been told that the weather does not have any sympathy for anyone and the ones we have a tendency to overprotect may on realize when the weather is going to them harm.  Another thing we use to be told is we may not be able to do anything for them when illness comes upon them and we will not be able to come to their rescue anymore and so we were told not always go to their defense, if they are not injured badly.  With a fragile person experiences hardship for the first time, it may be too much for them and not be able to recover from this situation and the damage done within this person will be because of you, you who have tried to defense your son or child, when ever you think anybody has wronged them, or tried to discipline them for thing they did wrong, and if you are father or a mother who has created a fragile person, you will have to worry about them all the time, for the rest of your life and their life.

The image included here of the circle where the arrows are going one way around the circle and some are going around the opposite way is meant to show us, how confusing it can become for a child who has been told to often, don’t do that, and commenting every action they are doing, not being left alone to just be themselves for a little while, not being allowed to touch anything, don’t make any mess.  After a while the word “don’t” loses its meaning and will make the child no longer care to hear the word.  Again the hope is always there, but we have to refrain from saying things like, “Did I not warn you about that, look I told you so”, as this is considered to be simply patronizing the child, and only going to anger the child.

If we are going to discipline a child, we must make them understand clearly the reason for what it is we have to discipline them.  Once you have discipline the child, let them know you still love them.  Be aware of things like; sometimes a child will cry easily because they are either getting sick, or overly tired, may not have been eating properly.  We as parents or adults must be the ones to try and understand what the child is going through, mainly because a child does not and cannot understand what they are going through, and a child will not let you know what is going on with them, because they don’t know.
If we scold children too harshly for things; like accidentally spilling something or punishing them for every little wrong thing they do, they will start to think they cannot do anything right, so why bother even trying to do right thing anymore?  If we want to bring up children properly, we must not scream at them all the time or we will shock them and totally break their heart.  And if we punish them for every little wrong thing they do when they are trying new things, to learn, we will take away their will to try.  And if we just continue to scream at them for every wrong they ever do, we will only succeed in making them dysfunctional, and to me, that is not the proper way to bring up children.  Nunia thought that this presentation was an excellent theme for the concept of Pilimmaksarniq, thank you.  We must seek the balance in each child, for we are all different in many ways.


We have to be careful when raising children

More from this channel: Sila Isumataungmat