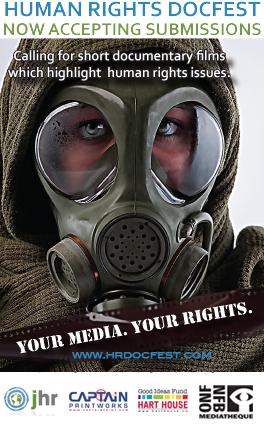 Toronto, ON (March 29, 2010) – The University of Toronto Chapter of Journalists for Human Rights is pleased to announce they are seeking submissions for the 2nd Annual Human Rights Documentary Film Festival.

The festival, which will be hosted at the National Film Board’s Toronto Mediateque on July 23rd- 25th, will showcase Canadian films that highlight both national and international human rights issues. "Human Rights Docfest 2010 seeks to leverage the powerful message of documentary films and to engage the community in dialogue about pertinent human rights issues around the world and here at home” says Festival Director Sophie Langlois.

The Human Rights Doc-Fest will be accepting submissions of full-length feature and short documentary films until June 1st 2010. Submissions will be placed in two categories, those with a production budget higher than $5000 and those below $5000. Submissions will be judged by a panel of high profile, industry leading judges from organizations such as jhr, the University of Toronto, Hotdocs Film Festival, Think Content Inc. and the Toronto Amnesty Business Human Rights Group.

“The Human Rights Doc-fest goes a long way toward helping Canadians become aware of human rights issues both inside and outside of our borders” says jhr Executive Director Ben Peterson. “Last year’s winner Where Credit is Due highlighted the success of micro credit programs in Guatemala and successfully educated Canadians on an issue of rising global importance.”

jhr is Canada’s largest media development organization. Through its projects in post conflict countries like Sierra Leone, Liberia and the DRC, jhr mobilizes local media to reach millions of Africans regularly with human rights stories. In Canada, projects like the documentary film festival help jhr reach its goal of making everyone in the world aware of their rights.