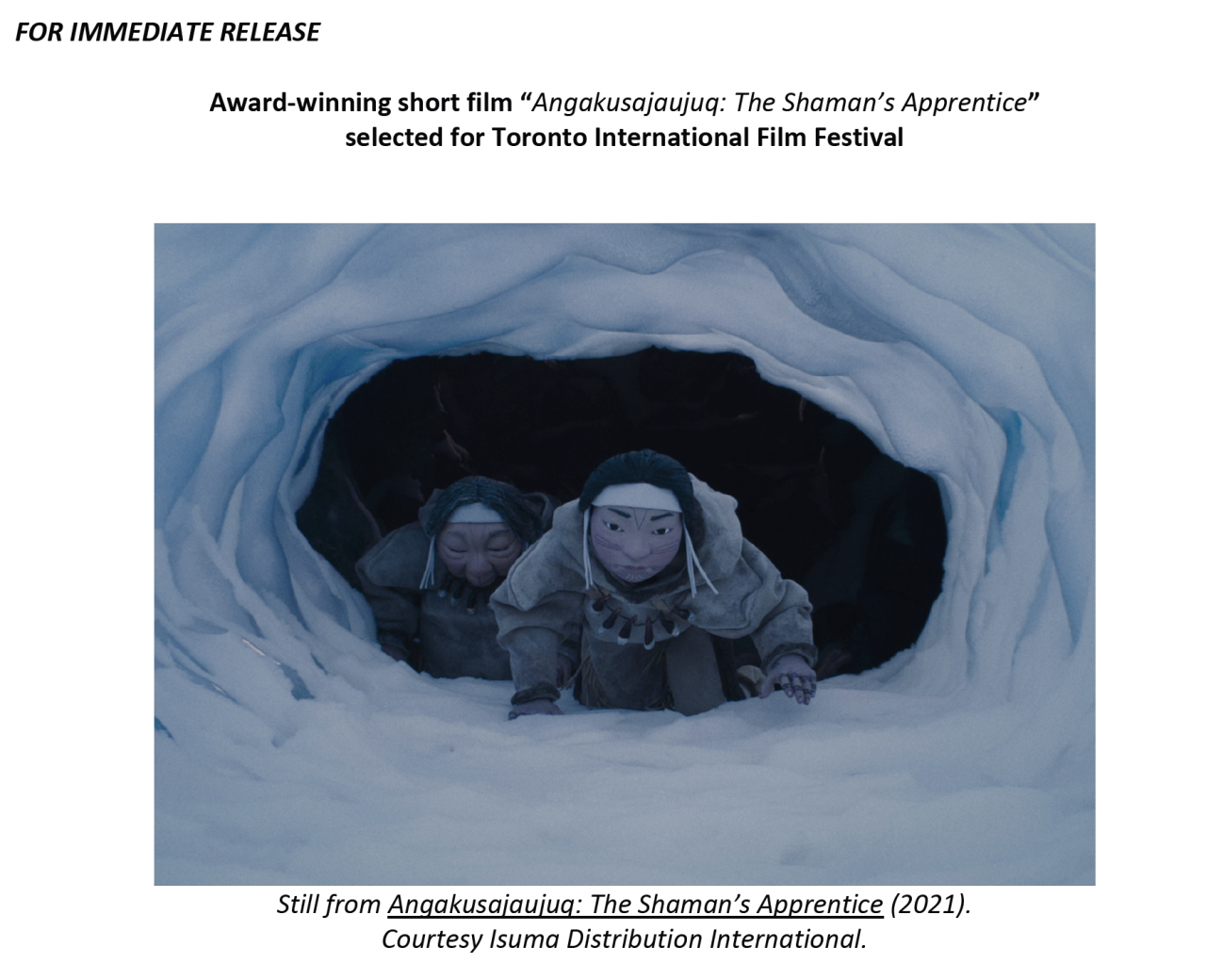 MONTRÉAL (August 11, 2021) - Taqqut Productions and Kingulliit are pleased to announce the upcoming North American premiere of Angakusajaujuq: The Shaman’s Apprentice at the 46th Toronto International Film Festival in September, 2021.

Angakusajaujuq: The Shaman’s Apprentice is the latest film from noted director Zacharias Kunuk, creator of Atanarjuat The Fast Runner (winner of the Camera d’or in 2001), The Journals of Knud Rasmussen (2006), and TIFF “Canadian Top Ten” film One Day in the Life of Noah Piugattuk (2019).

An animated short feature, Angakusajaujuq: The Shaman’s Apprentice recently won the prestigious FIPRESCI Award from the International Federation of Film Critics at the Annecy International Animation Film Festival in July, 2021.

Featuring evocative imagery created with stop-motion animation, Angakusajaujuq: The Shaman’s Apprentice is an adaptation of an Inuit traditional story from the North Baffin region. The film brings to life the story of a young shaman in training who must face her first test - a trip to the underground to visit Kannaaluk, The One Below. Facing dark spirits and physical challenges, the young shaman must trust the teachings of her grandmother and mentor, Ningiuq Angakkuq, and learn to control her fear.

“In the Inuit culture long before the Europeans came, we have heard stories of how they would heal the sick, in the time of Shamans and helping spirits that rule the land, in the land of sky goddess, land goddess and the sea goddess,” said director Zacharias Kunuk. “In the law of nature and rules of taboos, but when a taboo is broken the broker becomes sick and has to confess one wrongdoing and sometimes they are ashamed of what they did and try to hide it and this story tells of a hunter who tried to hide what he did when he broke the taboo of sharing.”

Kingulliit Productions is part of artist collective Isuma ᐃᓱᒪ, Canada’s first majority Inuit owned media production company. Founded in 1990 and based in Igloolik, Nunavut, Isuma is known internationally for films written, directed and performed in Inuktitut, including the Caméra d’Or award-winning Atanarjuat: The Fast Runner (2001), and TIFF “Canadian Top Ten” film One Day in the Life of Noah Piugattuk (2019). After representing Canada at the 59th Venice Biennale in 2019, Isuma started the world’s first indigenous language television station, Uvagut TV, currently broadcasting 24/7 to over 600,000 homes across Canada.

Taqqut Productions is an Inuit-owned film production company located in Iqaluit, Nunavut. Taqqut is committed to bringing the stories of the North to the world and aims to establish itself as an innovative leader of youth and children’s programming. The company’s eleven short films have screened at festivals in eighteen countries and have won over twenty-five international awards. Recently, Taqqut Productions completed production on season two of the television series, Anaana’s Tent, which premiered on APTN in early 2020. Season three is in production and will air on APTN on completion.
Taqqut has production experience with live action, stop-motion animation, 2D animation, and puppets. Working with the Inhabit Media educational team (an award-winning Inuit publishing company), Taqqut has a wealth of stories of Northern folklore to share with the world.