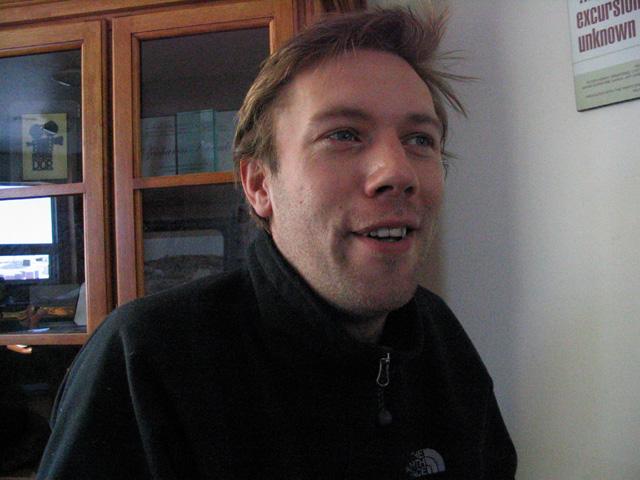 What do you think of Igloolik so far?

It's very white, very nice. I like it, it's very different. There's a lot of snow. I used to play in the snow when I was a kid, but never this much. It's like going back in time.

I don't remember when I started. I've done it since I was a kid, so it just kind of happened.

In Denmark you have to do a lot of things. I've done stage, television, and feature films and I enjoy stage because it's live. I enjoy feature films because it forces you to work in a different parameter.

How did you get involved in this project?

I was called by a casting agent, and I did an audition. Then I got the part.

He's a Danish archaeologist who's on his first trip. He was invited by Knud Rasmussen and he came along to draw maps and collect items. He's a very academic person, very scientist-minded and I think that his meeting with nature changes him from when he arrives. He's 28 or 29.

What preparations have you made for the role?

Well I read a lot of books about him, and he wrote a few himself and the others that he travelled with; Peter Freuchen and Knud Rasmussen. So that's one part because it's from 1923, so it's very historic and a lot of reading. Then I met some people who knew him in real life. I'm learning some Inuktitut language right now.

How are you finding the language and culture barrier?

The language is very different, but once you get into it, it makes sense as most languages do, but it's very different. The hard thing is that there's nothing recognizable from your own. I'm Danish, but if I wanted to learn Spanish, you have the Latin fundamentals. You don't have that here, so it makes it really different. Slowly but surely. We don't have time to learn it fluently so we're concentrating on the lines we have to do. I think it's going to work out, I just hope he (Zacharias Kunuk) doesn't ask us to improvise in Inuktitut! (laughs). But I'm fortunate in a way, because it's the first trip across the Arctic for my character so it's plausible that he doesn't speak it fluently. He's a quiet type.

Love it and work.

What are you hoping for?

I'm involved in something, but it's always the financing. It needs to be given the green light.