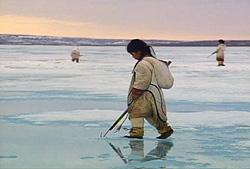 From an Inuit point of view. Produced, directed, written, and acted by Inuit

This 13-part dramatic television series brings to life the people, setting and continuing story of how Inuit in the Igloolik region of the Canadian Arctic lived on the land in the 40s.

Based on true stories of present-day Elders, who still remember their early days growing up just before government and settlement life begun, Nunavut recreates a nomadic lifestyle that no longer exists today.

Following the lives of five fictional families played by contemporary Inuit, the series takes us through the different seasons of the Arctic year. Beginning during the beautiful northern spring of 1945, Nunavut re-enacts first encounters with the priest at Avaja. Inside the church, the sermon is clear: Paul 4:22, “Turn away from your old way of life.” Nevertheless, the Inuit continue their age-old traditions of fishing, hunting for walrus, caribou, and seal. Home is kept cozy by a carefully-tended seal oil lamp. But even here, news of the terrible world war raging outside makes people frightened and uneasy. The series closes on Christmas Day, which for Inuit in 1946 is a strange mix of ritual, some from the old life and some from the new.

Synopsis
Igloolik, Spring 1945. While imparting knowledge to the next generation, one family travels in the immense and beautiful arctic during spring.