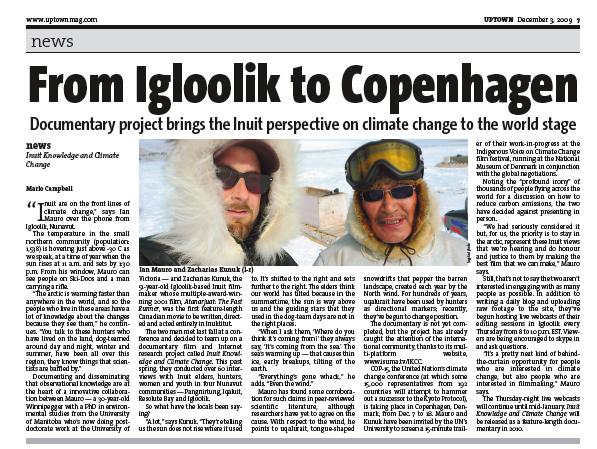 From Igloolik to Copenhagen

"Inuit are on the front lines of climate change," says Ian Mauro over the phone from Igloolik, Nunavut.

The temperature in the small northern community (population: 1,538) is hovering just above -30 C as we speak, at a time of year when the sun rises at 11 a.m. and sets by 1:30 p.m. From his window, Mauro can see people on Ski-Doos and a man carrying a rifle.

"The arctic is warming faster than anywhere in the world, and so the people who live in these areas have a lot of knowledge about the changes because they see them," he continues. "You talk to these hunters who have lived on the land, dog-teamed around day and night, winter and summer, have been all over this region, they know things that scientists are baffled by."

Documenting and disseminating that observational knowledge are at the heart of a innovative collaboration between Mauro - a 30-year-old Winnipegger with a PhD in environmental studies from the University of Manitoba who's now doing post-doctorate work at the University of Victoria - and Zacharias Kunuk, the 51-year-old Igloolik-based Inuit filmmaker whose multiple-award-winning 2001 film, Atanarjuat: The Fast Runner, was the first feature-length Canadian movie to be written, directed and acted entirely in Inuktitut.

The two men met last fall at a conference and decided to team up on a documentary film and Internet research project called Inuit Knowledge and Climate Change. This past spring, they conducted over 60 interviews with Inuit elders, hunters, women and youth in four Nunavut communities - Pangnirtung, Iqaluit, Resolute Bay and Igloolik.

So what have the locals been saying?

"A lot," says Kunuk. "They're telling us the sun does not rise where it used to. It's shifted to the right and sets further to the right. The elders think our world has tilted because in the summertime, the sun is way above us and the guiding stars that they used in the dog-team days are not in the right places.

"When I ask them, 'Where do you think it's coming from?' they always say, 'It's coming from the sea.' The sea's warming up - that causes thin ice, early breakups, tilting of the earth.

"Everything's gone whack," he adds. "Even the wind."

Mauro has found some corroboration for such claims in peer-reviewed scientific literature, although researchers have yet to agree on the cause. With respect to the wind, he points to uqalurait, tongue-shaped snowdrifts that pepper the barren landscape, created each year by the North wind. For hundreds of years, uqalurait have been used by hunters as directional markers; recently, they've begun to change position.

The documentary is not yet completed, but the project has already caught the attention of the international community, thanks to its multi-platform website, www.isuma.tv/IKCC.

COP-15, the United Nation's climate change conference (at which some 15,000 representatives from 192 countries will attempt to hammer out a successor to the Kyoto Protocol), is taking place in Copenhagen, Denmark, from Dec. 7 to 18. Mauro and Kunuk have been invited by the UN's University to screen a 15-minute trailer of their work-in-progress at the Indigenous Voice on Climate Change film festival, running at the National Museum of Denmark in conjunction with the global negotiations.

Noting the "profound irony" of thousands of people flying across the world for a discussion on how to reduce carbon emissions, the two have decided against presenting in person.

"We had seriously considered it but, for us, the priority is to stay in the arctic, represent these Inuit views that we're hearing and do honour and justice to them by making the best film that we can make," Mauro says.

Still, that's not to say the two aren't interested in engaging with as many people as possible. In addition to writing a daily blog and uploading raw footage to the site, they've begun hosting live webcasts of their editing sessions in Igloolik every Thursday from 8 to 10 p.m. EST. Viewers are being encouraged to skype in and ask questions.

The Thursday-night live webcasts will continue until mid-January. Inuit Knowledge and Climate Change will be released as a feature-length documentary in 2010.