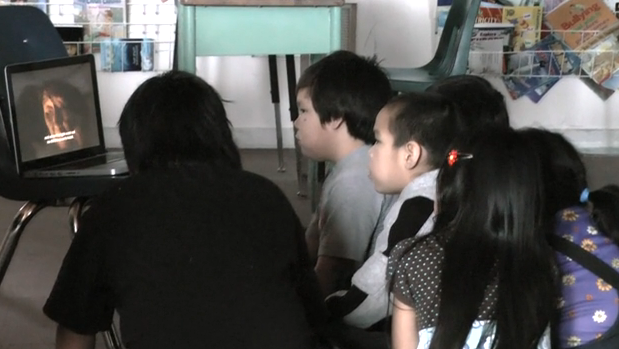 At the elementary school, sixth grade students watch Maana video (a video about climate change made by the Inuit circus collective Artcirq) from the Inuit Culture Education site and learned about climate change situation in the Arctic. After watching the film the teacher developed some activities and gave each of the students an ipod. The students shot a small video of what they understood of the lesson and made some contributions to the subject from their own point of view. Students were really receptive to the video and the use of internet technology so as the fact of having the ipods to record their own perspective.

Second grade students watch the first part of Before Tomorrow film (made by the Inuit Women collective Arnait). In Nunavut, second grade class is given in Inuktitut so teacher used the film as a way to teach students Inuktitut vocabulary of traditional objects, transportation, and traditional way of living. Then students made some drawings of what they could remember of the film. Students were able to understand the film and related to it. The film is made in Inuktitut and is an excellent resource for the Inuktitut teacher who lacks more learning resources in Inuktitut.

At the High School, 11th grade teacher gave a class on climate change and screened 'Ukiutatuq Takuguk!' a video from the 'Inuit Knowledge and Climate Change' project within the Inuit Culture and Education area. The video was made for the United Nations COP-15 and was presented in Copenhagen at Denmark's National Gallery. The film features Sheila Watt-Cloutier giving her speech at the Lafontaine Baldwin Symposium held on spring 2009 in Iqaluit and footage from Pangnirtung, Resolute Bay and Igloolik. After watching the video students were given an ipod nano to interview people in the school about climate change through their own video cameras. Students were very interested in the content of the video and got exited about the possibility of watching more videos through IsumaTV/DIAMA and the Inuit Culture Education site at high speed.

The Social Studies class at 11th grade learned about Residential Schools and watch one of the testimonies at the Inuit Culture Education area. Students came up with some questions about the subject and were given each one an ipod so that they could interview people around the school. Students were really motivated by this so as the teacher who was fascinated by the amount of multimedia content available on the Inuit Culture Education site that he can use as learning material for his Social Studies class.

Both of the principals, at the Elementary and the High School were very enthusiastic about the project and the amount of learning materials provided so as the concept of the server which allowed them to watch the videos on high-speed despite their very low internet connection and the fact that students could make use of the technology and feedback through it, uploading it after to IsumaTV. Watch the full experience at: http://www.isuma.tv/isumatvinigloolik