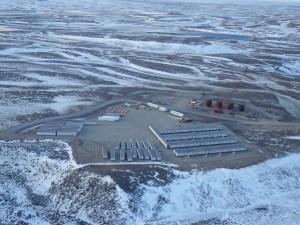 This first step follows the corporation’s successful signing of the Mary River Agreement (Inuit Impact Benefit Agreement and Commercial Production Lease) with the Qikiqtani Inuit Association on September 9th. The project launch was also made possible by the Nunavut Impact Review Board approval given in December 2012, all be it as a “Early Revenue Phase” version of the original proposal.

On September 25th Baffinland made their inaugural charter flight carrying employees and cargo from the Kitchener-Waterloo airport to the Baffinland Mary River Project site.

Carrying cargo and a maximum of 119 passengers, Boeing 737s will began to fly weekly to and from Nunavut with cargo and passengers. These chartered flights are coordinated by Sarvaq Logistics, a logistics company headquartered in Iqaluit, and operated by Nolinor, a Quebec-based charter airline.

Director of charter operations at Nolinor previously stated that this partnership might offer new charter opportunities for people traveling from the North suggesting that members of the public could even “crowd-source” flights by selling seats for flights online when the 737s are not in use with Baffinland.

But at this time no such initiatives have been taken.