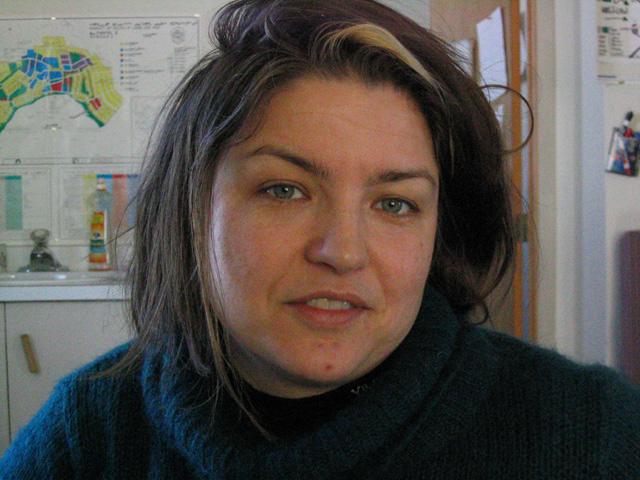 How did you get involved in this industry?

My education is in theatre design. I worked for years in animations and expressions, but I thought it was really boring because it always looks the same; like steel and wood and dust. So I contacted the Danish film school and got into there. Ever since then I've worked in film.

How are you enjoying your stay in Igloolik so far?

Yes, it's been quite peculiar. I think we landed during Easter, so things were happening at a different pace than we expected. I only have a week here, so I really wanted to get things done, but we ended up here during Easter so it was slow in the beginning, but things are starting to pick up, so that's really good.

What is your role for this project?

I'm the artistic director of the Danish part, which means that I help with the costumes (some of which were already produced when I got in), finding the right items for this period, and I've looked into what they might have brought with them on the sled. I'm doing the whole Danish expedition part of the film.

Can you tell me about the process of acquiring props?

First of all, I contacted the National Museum, where they have a large collection of Knud Rasmussen and Therkel Mathiassen's artifacts and had a meeting with the woman who's in charge of that exhibition. She showed me a lot of photographs and told me what they would have brought with them. Then I went to Knud Rasmussen's house, which is a small museum. So I went there, had a talk with them, and saw the kinds of artifacts they had there. From what I gathered from those two places I started contacting antique dealers, went to the props houses, and to private people for different kinds of things.

Get everything in on time, because we have such a short time here. We've had some sweaters knitted in Iceland, and we haven't received them yet, because they take so long to be hand knit, so we hope they arrive before shooting begins. Also knives were very hard to find because there are some very strong rules and regulations regarding the export of weapons, but I managed to get them over the internet from America, so hopefully they'll arrive. I bought seven knives and one has arrived. I'm still waiting for six, so I hope they'll get here soon (laughs).

Can you tell me about the Knud Rasmussen story and what it means to you?

Well, I think it means more to my parents' generation, because for them he was like an Indiana Jones character. He was a big hero in Denmark. He explored parts of the world which no on had ever gone to before. So, my parents tell me lots of stories about him, but I think he hasn't been as big a character for my generation. But he's definitely a character that we have a lot of respect for because he met other cultures on their terms.

Last year we worked on a film about Hans Christian Andersen's life, which was set in 1822, which was for both television and for cinema. We've also worked on a children's horror movie, and another horror film which is coming out this autumn. Last year I did a wedding film which is much like The Wedding Planner but a Danish version. Right now I'm working on another children's suspense film involving a circus and a criminal grandmother. Actually, I'm doing that right now, but I took some time off to come here and help with this project.

Can you walk me through your typical day?

Getting in the office early, and getting on the internet before everyone else does, when there's a chance to get a hold of people in Denmark. I sort of feel my way along the day, because it doesn't work the same way as it does in Denmark. It's been difficult the first couple of days because it was really quiet, but now I'm going over to the costumes hut because there are some adjustments that need to be made to our costumes, and then I go look in the workshop to see how the boxes are coming along and how the sleds are coming along, meet up with the others in the afternoon. So it comes as it goes, and goes as it comes.

I've got another film when I get back. We're still waiting for funding, but we'll know on Friday. We've already started it, so hopefully I'll continue with that. That will go on until June this year, and then after that I have a film with an American company which is going to be filmed in Iceland in the late summer. So I'm going to be busy most of the year. Then I'm going travelling for half the year on the Trans-Siberian railway to China and up through Tibet and Nepal and over to India.