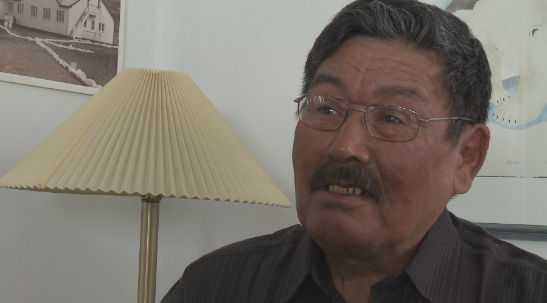 This past weekend, in the middle of a blizzard, Zacharias and I went to his cabin on one of the nearby bays on this island. We hung out and talked about the Inuit knowledge and climate change research film we are making. When we left, I walked outside ready to hop on the skidoo, and I was blown away by the night sky.

A slice of cheese was peeled off one edge of an otherwise full moon and the northern lights were blazing away. When you're on the top of the planet, here in Nunavut, these fabulous spectacles of light hang low in the sky, appearing almost as if you could reach out and touch them. Amazing!

I shared this story about the northern lights with Carol - an Isuma and Arnait Video editor and director - and she told me that you can actually hear them when they really get zipping around. She said it's so loud sometimes that it can actually scare you. In this place, especially at this time of year when the sun will soon disappear, local observations of the night sky and associated rhythms of the land are a focus.

Today, we were going through the interview with Pangnirtung's Joannasie Karpik, a 74-year old elder from the region. Joannasie is an instructor on the University of Manitoba travel-study course that I co-teach (www.isuma.tv/hi/en/ian-mauro/pang-program) and has been very influential in steering the direction of my postdoctoral research on climate change. Joannasie speaks in circles. His stories about life on the land swirl, like the northern lights, and fit into an ecology-based cosmology. He said:

"These currents, full currents, new moon, full moon, all of these. The moon helped us a lot. Full moon especially, but new moon not as much. That's how it was with the movement of the weather and currents. Here our tides are high when they are full, everything is connected. Animals would be there at the right time at the full moon"

The full moon is an essential part of the predictive ecological thinking of Inuit. Both a beacon and a beat, the moon helps Inuit to see the environment at night while allowing hunters to anticipate the location and timing of animal movements. However, Joannasie, like other elders we have interviewed, are telling us that nature's sync between the full moon and high tides is now off. The moon, tides and climate are no longer linked the way the elders once remembered them. The rythym of the land - and everything that is connected to it - is starting to change.