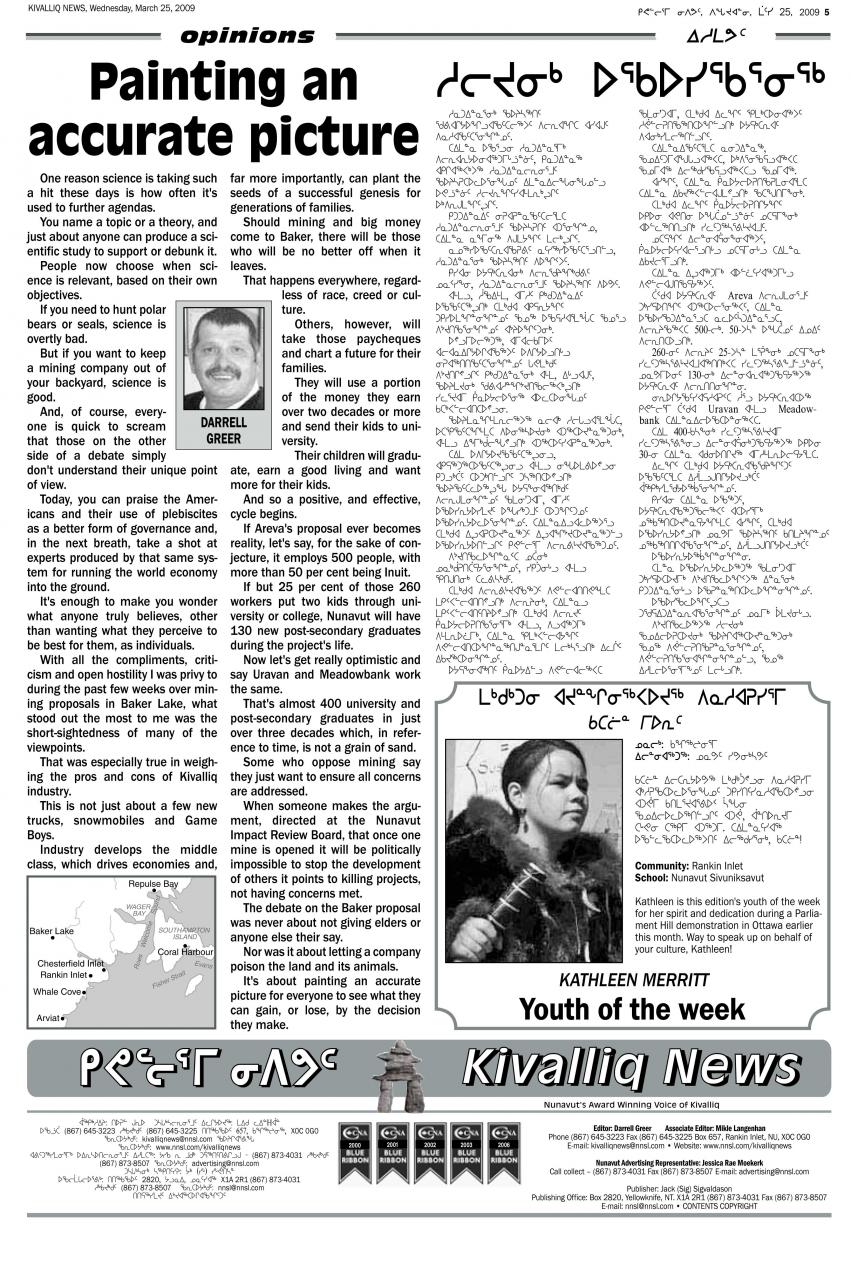 One reason science is taking such a hit these days is how often it's used to further agendas.

You name a topic or a theory, and just about anyone can produce a scientific study to support or debunk it.

People now choose when science is relevant, based on their own objectives.

If you need to hunt polar bears or seals, science is overtly bad.

But if you want to keep a mining company out of your backyard, science is good.

And, of course, everyone is quick to scream that those on the other side of a debate simply don't understand their unique point of view.

Today, you can praise the Americans and their use of plebiscites as a better form of governance and, in the next breath, take a shot at experts produced by that same system for running the world economy into the ground.

It's enough to make you wonder what anyone truly believes, other than wanting what they perceive to be best for them, as individuals.

With all the compliments, criticism and open hostility I was privy to during the past few weeks over mining proposals in Baker Lake, what stood out the most to me was the short-sightedness of many of the viewpoints.

That was especially true in weighing the pros and cons of Kivalliq industry.

This is not just about a few new trucks, snowmobiles and Game Bo

Industry develops the middle class, which drives economies and, far more importantly, can plant the seeds of a successful genesis for generations of families.

Should mining and big money come to Baker, there will be those who will be no better off when it leaves.

That happens everywhere, regardless of race, creed or culture.

Others, however, will take those paycheques and chart a future for their families.

They will use a portion of the money they earn over two decades or more and send their kids to university.

Their children will graduate, earn a good living and want more for their kids.

And so a positive, and effective, cycle begins.

If Areva's proposal ever becomes reality, let's say, for the sake of conjecture, it employs 500 people, with more than 50 per cent being Inuit.

If but 25 per cent of those 260 workers put two kids through university or college, Nunavut will have 130 new post-secondary graduates during the project's life.

Now let's get really optimistic and say Uravan and Meadowbank work the same.

That's almost 400 university and post-secondary graduates in just over three decades which, in reference to time, is not a grain of sand.

Some who oppose mining say they just want to ensure all concerns are addressed.

When someone makes the argument, directed at the Nunavut Impact Review Board, that once one mine is opened it will be politically impossible to stop the development of others it points to killing projects, not having concerns met.

The debate on the Baker proposal was never about not giving elders or anyone else their say.

Nor was it about letting a company poison the land and its animals.

It's about painting an accurate picture for everyone to see what they can gain, or lose, by the decision they make.