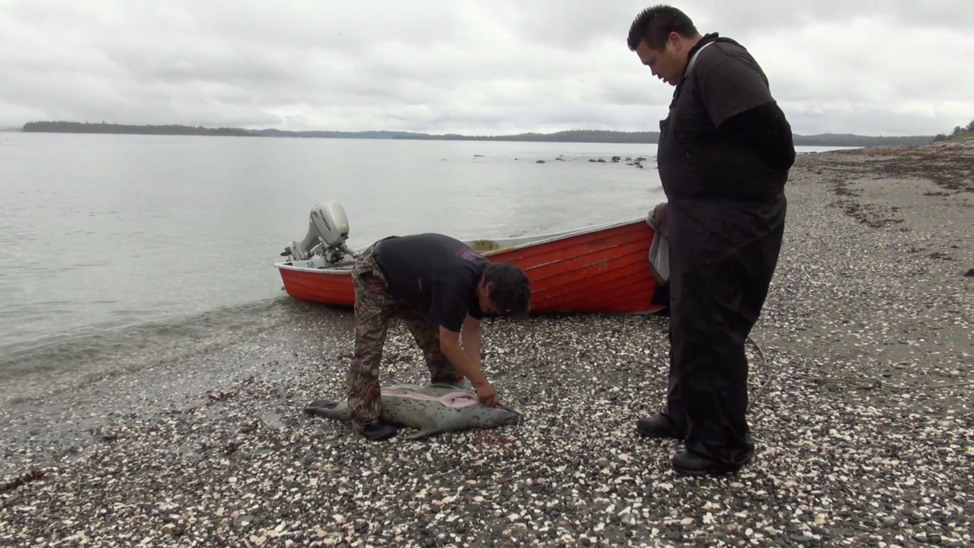 After the CMF (Canada Media Fund) grant got approved, and having decided on the co-directors of the film – Gwaii Edenshaw and Helen Haig-Brown – Jon Frantz, Zacharias Kunuk and Norman Cohn, from the Isuma team, traveled to Haida Gwaii to meet with the directors and talk to the Haida Nation.

Zach stayed with Jim Hart and his wife Rosemary, who were both very accommodating. Jim and Zach became good friends; they connected as carvers, and also both were interested in hunting. Jon told me that throughout the years of working with Zach, he has learned that Zach finds it much easier to talk to people casually out on the land. So during the 10 days they all spent at Haida Gwaii, Zach went out a lot on the land with different people. The directors of the Haida film would pick Zach’s brain whenever they could – to apply experience and ideas of his to their film.

Norman had meetings with various people – more in his usual role of having long and deep conversations. He spent long hours with Helen talking about his shooting approach and camera work. Jon tagged along with Norman, learning from his experience throughout these conversations. While I was listening to Jon, I wished they had filmed these conversations. Though I understand how difficult it is to be juggling the different meetings and paying close attention to whatever is being discussed – then filming on top of that is extremely challenging.

On that trip, Zach went out on the land and showed Haida how to hunt a seal – a hunt they used to do in the old days, but they had not done in years. I know from Zach that this was challenging for him, as it was a different land and he didn’t have the proper rifle to hunt with. Also it was a different breed of seal than in the Arctic. The skill of Zach’s is amazing to watch – fortunately, they did film some of the interactions Zach had over those ten days. The Haida took Zach on a deer hunt, to visit the museum and out to dinners. Haida people would just pop by the place where Zach was, and take him to different places. Zach had the opportunity to hear stories from Haida people, like the stories of Captain Gold – a Haida elder from Skidegate – who showed Zach the big trees of the land.

During that trip, Norman and Jon had meetings about the business side of things. Transferring the knowledge of how to start up a new production, and how to create a new company to make a professional feature film. This company had to be 80% owned by a representative of the Haida Nation – Stephen Grosse – and 20% owned by Zach. This was a new thing to the Haida because typically the producer owns the film, not the people of the community. Zach had to own 20% because that legitimized the project for CMF and Telefilm – two institutions where Zach has a track record of producing professional feature films.

Zach was supportive of the film but not overly engaged – his passion and knowledge is within the Inuit world. In Jon’s perspective, it was difficult for Zach to give any concrete advice, as a lot of his expertise comes from cultural knowledge, Inuit knowledge. Jon thought that sharing with other cultures was probably more on Norman’s side, and that Zach was mostly supporting the Haida to make their own film.

Jon realized Isuma has a creative expertise, and has developed a corporate engineering structure that is pretty sophisticated and hard to achieve. Through Norman’s thinking and strategies, Isuma has found a way to finance films at a professional level. And that was what Norman and Jon shared over that trip.

I asked Jon how did he organize the financing structure with the Haida. Jon said that right from the beginning, he explained to the Haida Council that they had to come up with $200,000 to contribute to the financing structure and be able to trigger more money. So from very early on, Haida Nation formally committed this amount, and the money secured by the end of the summer of 2015 was a clear political commitment to the project. When Zach and Norman visited, they all went to the Haida Council chambers and presented the project for about 45 minutes. The Council of the Haida Nation appointed Jason as the counsellor to keep informed on the business side of things. It was understood that it would be mostly Jon – as the producer of the film – who would do things and have a high-level overview of the project. Following Norman’s guidance, Jon did the CMF application and then explained to the counsellor what they had done and why. I was surprised at how fluidly it all seemed to have happened, and Jon confirmed that it was true; there was a lot of trust from the very beginning. But he also said Haida are a very entrepreneurial and busy Nation – they didn’t want to occupy too much of their time doing the paper work for the film production. The CMF film application was approved and got $750,000 from CMF and $600,000 from British Columbia taxes. This was when the film became real to the Haida and got their attention.