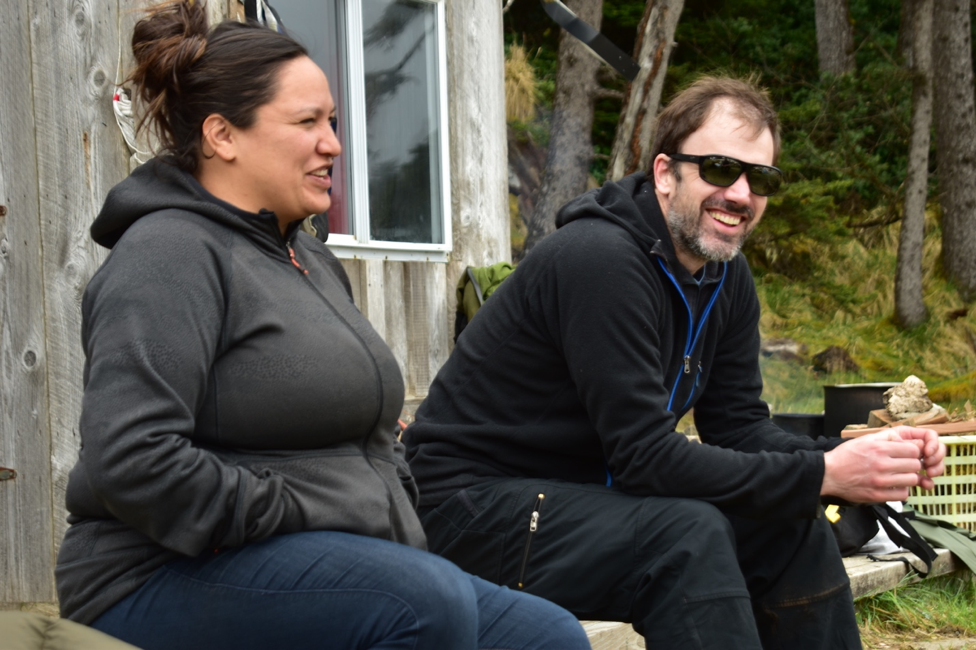 Curious to know about how the idea of the Haida film Edge of the Knife began, I asked Jon about his relationship with Leonie Sandercock who I heard was involved at the beginning of the project. It started when Jon Frantz was a student at UBC (University of British Columbia), where Leonie Sandercock was one of his teachers. As part of his training program, Jon started making videos for planning projects, one of which was a quick story of what he called ‘Pedestrianism’, where every-day citizens were able to bring their voices into community planning projects. These ‘pedestrianism’ videos had so much success that after making those, Jon started a production company and switched his program thesis from community planning to participatory video – and Leonie was his thesis advisor. Since then, Jon has been teaching a video class at UBC using video for planning.

Leonie Sandercock was born in Australia. She has been living in Vancouver for some years working at the UBC Planning School where she has been focusing on the indigenous planning stream. Over the years, Leonie has been arranging for students’ internships in some indigenous communities, one of which was Skidegate, Haida Gwaii. Jon told me how out of the relationships Leonie had been developing in Skidegate, the idea of making a documentary in Skidegate came up. Leonie knew Peter Lantin – president of the Haida Nation – to whom she had presented the documentary idea for which she had a very positive response. This initial idea would eventually transform into a feature film when Zach and Norman came on board through Jon Frantz.
Based on the work Leonie’s students had been doing with the Haida Haida Gwaii, Leonie knew that the main objectives Haida wanted to focus on were: language, showcase Haida culture identity and, the ability to provide alternative economic opportunities in a remote community. This last one was important because, as many remote communities, the Haida Nation economy depends on traditional sources of extraction. Among the three, they had identified that language was the most urgent need.

After Leonie’s initial approach, Jon travelled to Haida Gwaii to present Isuma’s work, and the idea of a feature film in collaboration with Isuma, to the Council of Haida Nation. By this time, Jon was already living in Igloolik and working at Isuma. The exploration trip to Haida Gwaii was possible because Jon and his wife had gone back to Vancouver for a couple of months to have their second child. I was curious to learn if the Haida knew about Isuma’s work by then. Jon said that most people in Canada know or have heard about Isuma’s first feature film Atanarjuat, The Fast Runner. In this presentation, Jon introduced the possibility of making a Haida feature film and answered a couple of questions from the Haida Council. What followed then was a series of necessary activities to make this happen such as talking to the elders, presenting to the two band Councils and leading some public discussions.

After the Haida Councils and the elders confirmed their interest in making this film, the next step was fundraising. The first step was made by Leonie who applied for a SSHRC grant (Social Sciences and Humanities Research Council), a Canadian federal government grant that supports university-led research projects to forge connections. Leonie was able to apply because there were three connecting elements: the academic research from UBC, the community involvement from Haida Nation and, the Isuma expertise on filmmaking. The $200,000 grant was approved making it possible to start the project, to work on the script for the film. The second fundraising strategy was that Norman Cohn – co-founder of Isuma – obtained a $36,000 scriptwriting advance from Telefilm for Kunuk Cohn Productions to finance Haida to write a film script. In May 2015 – with Norman’s guidance – Jon Frantz applied for a CMF (Canada Media Fund) grant to make a feature film.

The SSHRC grant helped organize different workshops and community discussions to foster a broad engagement from the community and, to build the knowledge transfer to make the film. There were story gathering workshops that provided “food” for the script. During these workshops they collected information, different types of stories, time frames, locations, characters and details that could help in imagining what kind of film to make. After this, Leonie gave script writing workshops where she went through the basic elements of script writing. The workshops ended in a short competition where people had to submit 3 to 5 pages of a story outline.

Jon recalled how this three-way partnership developed in a very organic way. Leonie and the Isuma team knew a lot of people had made films in Haida Gwaii because it’s a very popular culture, but they also knew that if Haida could be owners of their film, for their Nation, from their Nation, and hire their own people, this would be a transformation for them.

At this point in the conversation, I was curious to learn about Jon’s personal motivation in this project. Jon told me that, while living in Igloolik at the time, he knew he would eventually be back in British Columbia, so he wanted to connect his Isuma work with a BC project. Through his experience in Igloolik, he had learned, and was amazed by, how powerful it can be to share a story from an Inuit point of view. It made him want to work on projects that help bring indigenous stories to light, and use what he had learned from his experience with Isuma and living in Igloolik.

For the SSHRC grant, Leonie was the principal investigator and Jon was the associate researcher. Because Jon lived in Igloolik, very few workshops could be facilitated by Jon, so Leonie hired Dana Moraes – a community planner from the Haida Nation who had been involved in the initial ideal of the film from the very beginning with Leonie – to help with some logistics like booking, promoting and running a lot of the workshops. As a Haida woman, Dana knew how to follow the Haida protocol, things such as making the space for the prayers of the elders, offering food at the workshops and, providing door prizes whenever a workshop happened.

While I was listening to Jon, I wondered if Leonie had previous experience in making community-driven feature films. Jon told me that actually the whole development of a feature film was also new to Leonie. For several years, Leonie had been writing books and articles, it was only later that she got involved in grass-roots organizations. I was fascinated to learn this as it made me think of how when we see a finished product the art piece, the film… it looks as if for some people it was easy, that they knew what and how to do things. In reality, for something new to exist, for innovation to happen, people need to invent things and figure out solutions for every step of the process. People need to dare to walk the unknown path, have ‘their first time’, not know and explore.

While Jon was preparing the CMF grant application, Leonie focused on the script development with Graham Richard and brothers, Gwaii and Jaalen Edenshaw. Graham and the brothers had won the script competition with a very creative script, clear with amazing cultural knowledge. Leonie played a mentoring role more on the script development technical side, while the brothers focused on the cultural aspects and the details. Graham Richard – a Haida man living in Haida Gwaii – had a full-time job at the Communication Department of the Haida Nation and was in charge of being the script supervisor.

After CMF’s approval, Jon started going frequently to Haida Gwaii and interacting more with everyone. As the producer of the film, he decided to make the first invitation to be directors to Gwaii and his brother Jaalen. He also proposed a co-direction role to Helen Haig-Brown from the Tsilhqot'in First Nation – an Athabaskan-speaking ethno linguistic group – married to a Haida man and living in Haida Gwaii. Jon thought of Helen because of her filmmaking background. Helen was an award-winning director and a leading talent in experimental documentary, so she had a lot of experience to bring to the film.

In the end, Jaalen didn’t work as director because as a full-time carver he was always busy working on big projects. At the time, Jaleen was working with Jim Hart – a Haida artist and chief of the Haida Nation – in making the UBC Reconciliation Pole. However, Jaalen was very supportive of the film all throughout the production – lending a lot of his props, logs, and even lending his workshop for the film.

I asked Jon if there was any help from Isuma to work on the script. He said neither Norman or Zach got involved in this part of the process as they thought it wasn’t appropriate. However, the script writers were provided with DVDs and the book of Atanarjuat, The Fast Runner – which included stories of the making of the film and the script – from which they could learn.