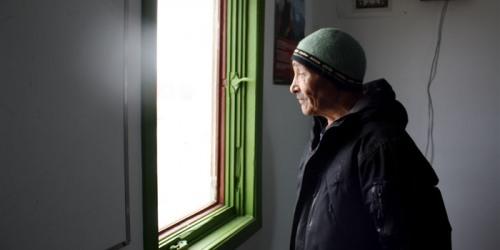 Disparate topics, but all three guests emphasized the same point: the cumulative impacts determined in Baffinland’s final environmental impact assessment have not taken into account the massive environmental and socioeconomic changes the North continues to adapt to and experience, and none of the regional, territorial and federal review agencies have mentioned pre-existing environmental stressors in their discussions of cumulative impacts either.

All three shows are available to listen to on IsumaTV’s Digital Indigenous Democracy site, but an edited transcript of Ikkummaq’s comments is below. His description of the changes—both natural and anthropogenic—that Steensby Inlet has undergone in the past 40 years, is vivid and beautiful.

I moved to Steensby in the summer of 1972 with my brother; he wanted to find a place to settle down. We set up our camp near where the [fuel] barrels are located now, on the right side of Steensby Inlet. There were many species of birds, like swans and Canada geese, and there were seals and bearded seals as well, but the bigger game, like the bowhead and the walrus were not as plentiful. We saw no polar bears.

We moved our dogs south with us, travelling to the place where we would live. We set up our tents there and when the fall came we made a qungmuk (sod house). It was 25 wide and 30 feet long. It had a bed, a stone floor and was completely made of sod; a real, traditional sod house.

When we were setting up our camp, we set up our nets on the shore and there were so many fish that even the dogs had plenty to eat. We got to know all the rivers and lakes in the area and almost all of them had fish in them. There are 12 lakes with sea wren char, but each lake has different species. One lake had two species: one had white meat and the other had red meat. And all of the rivers had migrating fish.

We later travelled inland, toward where they’re going to be setting up the railroad, and what I saw was astonishing. We had planned to go fishing but I noticed some migrating routes that the caribou used. There wasn’t just one main route, but many different ones; there were a number of them. And there was this pass—a caribou pass—where animals were travelling, and you could just watch them from morning ‘til night, and they would migrate, continuously migrating not as separate herds, one by one, but continuously migrating. I had to move aside and let them pass because they weren’t going to budge from their route. My brother and I tried to count them but we lost track at 3,700. And that was about 37 minutes.

That was my first recollection of that area, but I later learned that this was a yearly activity with the caribou. They would start the migration in July—always slowly at first, but then they would move in huge numbers. If the ice formed late in the fall, the caribou would be stuck in one area until the ice formed and then they would move on again. When you watched them, it seemed like the land was moving because there were so many caribou migrating at the same time. There were moving to Steensby. And when you looked at them with binoculars, you could see that their eyes were closed and they were just following each other. At Steensby, they stopped migrating until the mosquitos came in July.

When we later moved to Ikpiq, the same thing happened. There were a lot of caribou and you could actually see the inuksuit that Inuit built to hunt caribou and you could see the places where the qayaqs would be placed. You could see the traditional activities that had taken place still there. That’s how it was: an old traditional hunting area, the activities still visible on the land.
Geese, loons, sandhill cranes, they all nested on the Baffin Island mainland. There were not as many smaller birds and no shore birds like we have in the Igloolik area. There were some eider colonies further down in Steensby; thousands of eider ducks laying eggs. Never on Baffin Island but on the little islands around Baffin.

As for the seafloor creatures, we never really had much of those, but we knew what we had because we looked at the stomach contents of a bearded seal and found it was feeding on the likes of shrimps, starfish, codfish—seals aren’t really choosy, I guess, so they don’t get into escargot or clams.

So that’s when my brother and I moved into that area. People thought that my brother set up the camp but it was actually me. He took me out and taught me. That’s when I grew up, became a man, I guess. I learned through that experience. Because I had to learn how to hunt and get my language back. And it would be good for the youth to go through what I went through too.
With the ship traffic happening now, we’re finding that squid and octopuses are moving in. They were never there before. Puff fish are showing up when they were never there before. And puff fish doesn’t have a predator at all; it just eats and eats.

Multi-year ice used to go all he way to Steensby. It went all the way to Cape Dorset. It was an annual thing. There are nutrients in the multi-year ice, which feed the invertebrates, which allow for the larger animals to be healthy. My fear is that all of that will stop when the ice stops forming in Steensby Inlet.

Steensby has a lot of landfast ice. It starts at the end of Steensby and goes, sometimes, all the way to Rowley Island. Land-fast ice is where life starts in the North. That’s where the invertebrates live, and those feed the larger animals. So life actually starts with land-fast ice.

We can see the changes with the land animals better, but the animals are changing faster in the water than on the land.

Makivik Corporation and the Nunavik Marine Region Impact Review Board will also intervene in the final hearings in Iqaluit, July 16-20, Igloolik, July 23-25 and Pond Inlet July 26-28.