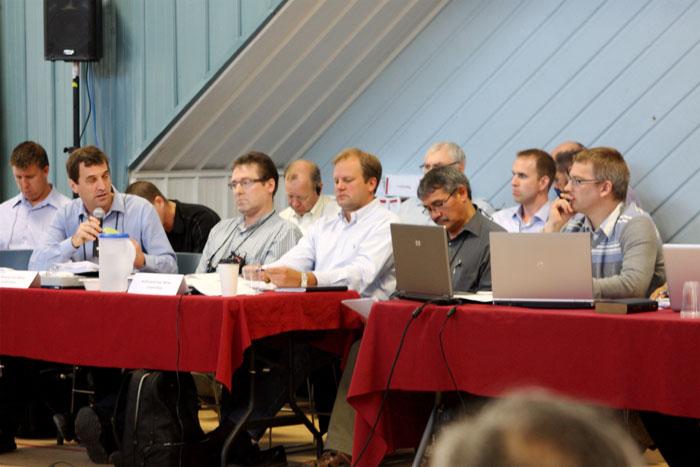 And even if tides, ice conditions, currents or avoidance of other vessels or whale pods didn’t sway Baffinland’s ships, Makivik harvests the same narwhal, beluga, bowhead and polar populations as Nunavummiut of South Baffin Island; where Nunavut is affected, Nunavik will be affected, and the Inuit of Northern Quebec believe their total allowable harvests will suffer without compensation if Makivik is left out of the Mary River review process.

Makivik has requested a separate review of the FEIS before its own Nunavik Marine Region Impact Review Board (NMRIRB), and is still waiting to hear back from the Minister of Aboriginal Affairs and Northern Development on whether or not he recommends a separate review. At that point, the NMRIRB would have 45 days to review Baffinland’s FEIS and determine whether a separate assessment is warranted.

But Baffinland presented evidence yesterday that Makivik was not left out of the process at all. After Makivik presented a list of concerns and recommendations that resemble a simplified version of DFO’s technical presentation (thresholds of 10% for detection of marine mammal population change are too high; the inadequacy of on-board ship monitors; Baffinland has underestimated the probability of marine mammal ship strikes; the isolated, Arctic underwater environment is naïve to anticipated noise pollution, sea ice destruction and the potential for oil spills, etc.), Baffinland’s legal counsel Keith Bergner cross-examined Makivik representatives Adamie Aluku and Gregor Gilbert on nearly four years of communication between the Nunavik corporation, Baffinland and NIRB staff.

After Makivik wrote initial letter to NIRB in April 2009, stating it had concerns with the Mary River project’s transboundary effects on the Nunavik Marine Region, it followed up with neither NIRB staff nor Baffinland, though Bergner produced a letter from NIRB to Makivik dated eight days after being contacted. It read, “We are very committed to ensuring full participation in the NIRB process by the residents of the Nunavik region and are open to suggestions from Makivik as to how best to facilitate this.” But Makivik never responded to that letter, Baffinland’s repeated phone calls throughout the summer of 2009 or a letter dated August 2009.

“I do understand that our correspondence was inadequate,” said Aluku, “but we have new leadership within our corporation. We have had successful meetings with the Nunavut Impact Review Board, we have had recent meetings this year in 2012 with Baffinland in our head office in Montreal, we have made a lot of headway since 2009, and have a better understanding of the project.”

Still, said Bergner, Baffinland’s proposed shipping route does not, and was never planned, to travel through the Nunavik Marine Region. In fact, Raglan, a Northern Quebec nickel mine whose royalties are administered by Makivik, avoids the southern part of the Hudson Strait because of heavy ice conditions in the southern portion. But even if Baffinland’s icebreakers never enter Nunavik waters, Aluku argued that any impact on Nunavimmiut harvesting is an impact on their culture and for that, they need to be compensated. That’s why AANDC chief federal negotiator Robin Aitken sent a letter the NIRB chair mentioning that Makivik’s participation might be an issue to consider.

But asked to describe what sorts of impacts he expected the Mary River project’s transboundary effects might have on the Nunavik Inuit, Aluku answered, “We have immense knowledge from our Elders, the Inuit of Nunavik. There are others with knowledge that I can’t speak now to your question. For the Inuit to be heard, we must go back to the communities.”

Nevertheless, QIA said it supported Makivik’s concerns. “What’s good for Nunavik is good for Nunavik Inuit,” said QIA president Okalik Eegeesiak. “Banding together will only make us stronger…. We look forward to working together and I hope we can work out issues way before getting the federal minister involved.”

NMRIRB also gave a short presentation introducing itself and its mandate under the NILCA, and the last intervenor, Lloyd Lipsett on behalf of Zacharias Kunuk, deferred his presentation until the hearings in Igloolik.