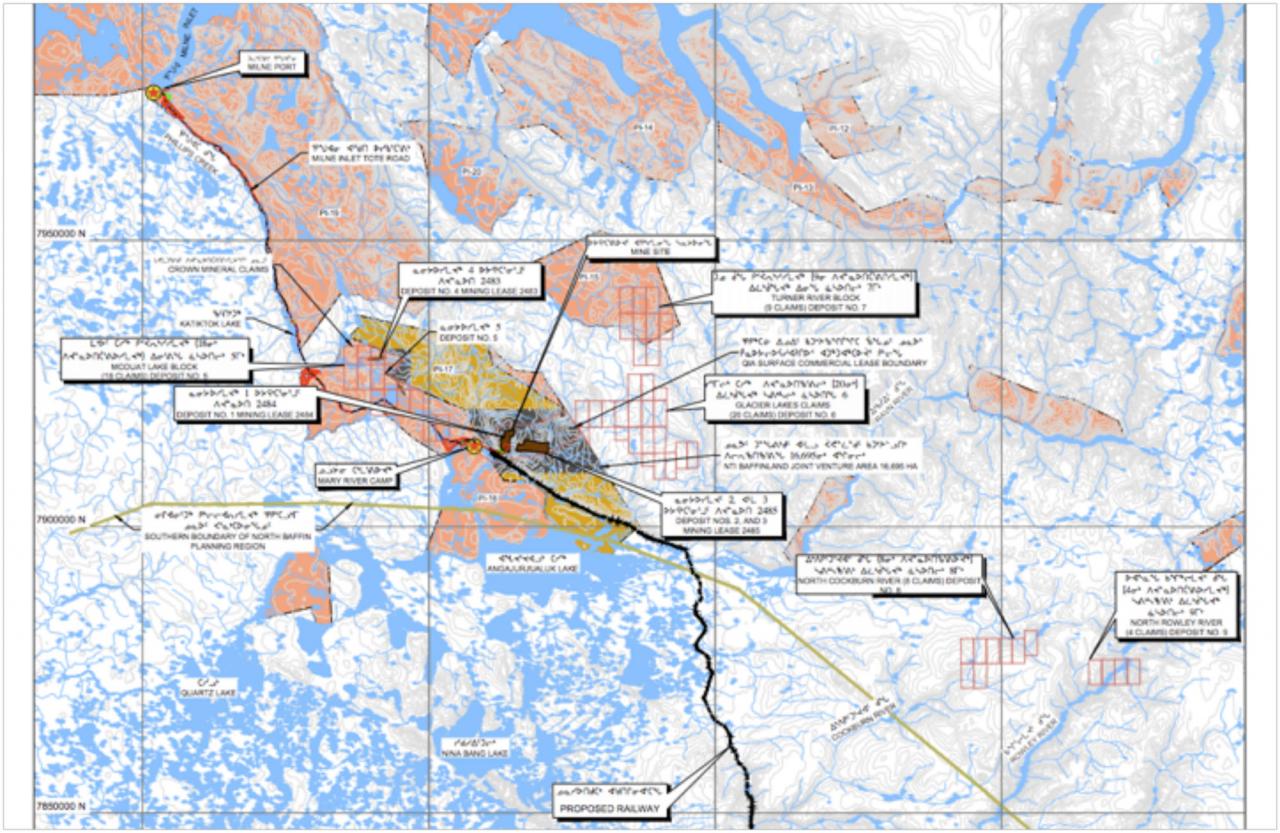 On May 30, the territorial and federal government agencies reviewing the Mary River project filed their final written submissions to NIRB regarding Baffinland’s Mary River Project. Their outstanding issues will form the basis of discussion at the final hearings, to be held in Iqaluit from July 16-20, Igloolik July 23-25 and Pond Inlet July 25-28.

Environmentally speaking, the scale of the project, coupled with the fact that many north Baffin ecosystems have never been thoroughly studied, greatly limited the possibility for accuracy in Baffinland’s final environmental impact statement (FEIS). As a result many of the comments dealt with environmental issues. The submissions of the Department of Fisheries and Oceans (DFO),

Environment Canada (EC), the Canadian Transportation Agency (CTA), the Government of Nunavut (GN) and Qikiqtani Inuit Association (QIA) all mentioned that Baffinland had to largely guess at the acute and chronic effects of frequent shipping, icebreaking, ballast water dumping, blasting, railway transporting, fuel storing and overhead flying on marine and terrestrial animals and their ecosystems.

CARIBOU:
One of the biggest remaining unknowns is the caribou. According to CTA, Baffin Island caribou is one of the Nunavut’s least understood populations. Though fewer than 1,000 caribou live near Mary River now, caribou numbers fluctuate wildly over a 60-70 year cycle and may reach as many as 30,000 by 2050. The GN, QIA and CTA all expressed concern that Baffinland’s FEIS has not taken into account how massive increases in the caribou population may result in their being hit by trains more often.
As well, CTA criticized Baffinland’s FEIS for basing many of its assumptions on how caribou will react to the railway on human logic and not observed data. Given the importance of country food to Inuit diet and the negative impacts on caribou populations reported in Baker Lake, GN urged for greater precaution in its assessment.

MARINE MAMMALS:
Considering marine shipping associated with the Mary River project will nearly triple the annual shipping traffic currently passing through the Hudson Strait, the effects of noise disturbance and repeated icebreaking—especially considering up to six ships will pass through at once—for walrus, seal and whale populations that have remained as yet undisturbed, will likely be intensified. According to the DFO, there is little information on the effects of noise disturbance on walrus rearing and communication or whale movement.

Also, though Baffinland’s FEIS claimed whales would have time to flee the path of oncoming icebreakers, DFO estimates up to five bowhead whales, 49 narwhals and 14 belugas would be killed by ship strikes annually. Considering the fact that Hudson Strait bowheads are shared with Greenland, Nunavik and the Kivalliq and Kitikmeot regions and belugas and narwhals with the Kivalliq region and Nunavik, DFO as well as QIA and EC are asking for more quantitative assessments of risk and strong monitoring programs.

YEAR-ROUND SHIPPING:
In its FEIS, Baffinland said seasonal suspensions in shipping were not cost-effective, but Aboriginal Affairs and Northern Development Canada (AANDC) and DFO urged it consider periodic suspensions in shipping, corresponding with periods of marine mammal calving and abundance. To avoid colliding with animals, Baffinland will also require an alternate shipping route; though Hunters and Trappers Organizations are working on back-up routes, Baffinland hasn’t yet supplied one.

As well, year-round icebreaking may disturb marine birds; the FEIS states Baffinland will employ mitigation measures only after 1% of the thick-billed murre population has been killed; this represents 30,000 birds. EC recommends Baffinland employ better precautionary measures and monitoring in this case.

OIL/FUEL SPILLS AND ACCIDENTS:
QIA noted that possible oil spills have only been modeled for Steensby Inlet and not along the entire shipping route, where ice and sea conditions vary widely. Many of the agencies also mentioned that Baffinland has not assessed how fuel can be recovered under ice, and the GN asked why Baffinland still hasn’t answered the question of how much fuel will have escaped from a ship or container before a leak is detected.

STEENSBY PORT:
Many of the above concerns are consequences of building and maintaining an ore dock, freight dock and over-winter fuel storage facility at Steensby Inlet. The two docks will destroy fish habitat and QIA noted that the storing of fuel through the winter has not yet been thoroughly discussed with the affected communities. QIA said it “understands that a port site at Steensby may in fact be the most viable option for Baffinland,” but DFO still recommends that Baffinland move the port to an alternative location off of eastern Baffin Island.

CUMULATIVE IMPACTS:
DFO, QIA and Natural Resources Canada all expressed concern that the Baffinland’s discussion of cumulative impacts was underestimated and under-examined in the FEIS. The effect of releasing 1.7 million cubic metres of water of only a slightly different temperature and salinity into Steensby Inlet, says DFO, will likely have an impact on the life cycles of the sea floor plants and animals, and considering Rotterdam, the ore carriers’ destination, is an international hub for invasive species, on the composition of the sea floor as well. Baffinland includes no discussion of the cumulative impacts of ballast water on Steensby Inlet in its FEIS.

DFO also noted that Baffinland didn’t mention how far iron ore and dust sediment will travel across the ocean, but it should, because when the ice cover melts in the summer, that sediment will sink to the bottom at once and coat plants or eggs during hatching season.

MONITORING:
Because there is so much uncertainty surrounding the acute and chronic effects of the mine on Baffin Island wildlife and their ecosystem, DFO, EC, QIA, GN and the Canadian Transportation Agency all criticized Baffinland’s plan to appoint employee monitors to ride at the fronts of the ships and trains with binoculars to report collisions as they occur.

QIA suggested a community monitoring program would engage nearby hamlets and DFO advised Baffinland to fly unmanned aerial vehicles ahead of the ships for the first year of operations, to track marine mammal densities before they get too close to the ship.

SOCIOECONOMIC IMPACTS:
In comparison with environmental impacts, there were few remaining concerns about socioeconomic effects, though QIA had “continuing questions about the interpretation of data and [socioeconomic] impact determination. Inuit still feel that the potential for serious negative outcomes, or the challenges to actually realizing benefits, are being downplayed in the FEIS.”

AANDC disagreed with Baffinland’s opinion that the project would not lead to increased substance abuse in the affected communities, especially considering the GN’s observation that Baker Lake saw an increase in crime and substance abuse with the arrival of the Meadowbank gold mine. Both the GN and AANDC mentioned that counseling needs to be provided both at the work site and at home in the community during each two-week off-rotation.

AANDC and Health Canada noted that Baffinland needs to initiate baseline studies to determine whether iron ore dust will contaminate the food supply and also to assess how the Inuit shift away from country foods once store-bought foods become more affordable will adversely affect their health.

AANDC also recommended that Baffinland provide a summary of how public consultation has influenced project planning as per NIRB guidelines.