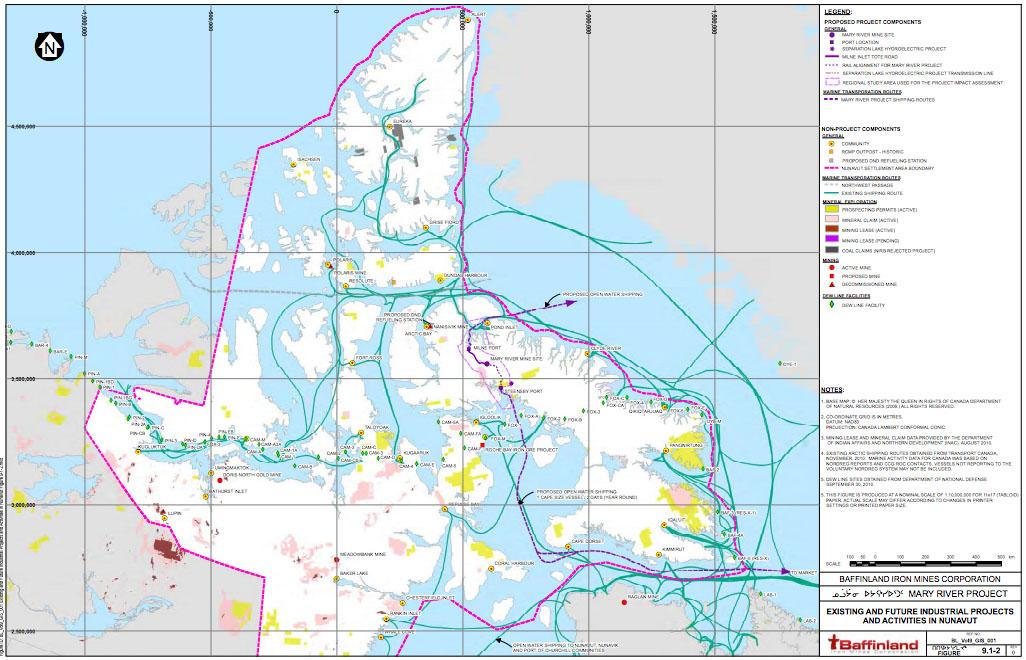 If the Minister of Aboriginal Affairs and Northern Development (AAANDC) decides Makivik Corporation’s request for a separate environmental assessment of the Mary River project for Nunavik is warranted, the issuance of a project certificate to Baffinland could be delayed by months.

Makivik Corporation made their request public in its intervenor comments to NIRB on June 8 and expects to hear back from Minister John Duncan by July 11. “That could be just an acknowledgement of our letter, however,” says Nunavik Marine Region Impact Review Board (NMRIRB) regional planner Mishal Nazeer. “But eventually he will decide whether he agrees that the project should undergo the NILCA [Nunavik Inuit Land Claims Agreement] process or not.”

At that point, NMRIRB would have 45 days to review Baffinland’s FEIS and decide whether or not its own internal review is warranted. “And in that case,” says Nazeer, “we would conduct the same review process as NIRB has already. There’s no set time limit for that, but since we’re only looking at the marine impacts of the project, our review would be significantly shorter”—on the scale of months and not the three years it’s taken NIRB.

Contrary to Baffinland’s assertion in the FEIS that the Mary River project would likely not affect Nunavikmiut, “Makivik believes the project will have significant effects upon Nunavik Inuit and the Nunavik Marine Region,” the organization said, adding it “is also of the opinion that there should be no permits, licenses or authorizations granted by the federal government until such time as the environmental review process has been completed by the NMRIRB.”

Because the project’s impacts on Nunavik would likely be related entirely to Baffinland’s intention to ship iron ore through the Hudson Strait, its considerations are limited to the marine environment, summarized below:

Although the FEIS concludes that its shipping route trough Foxe Basin and the Hudson Strait would be no wider than 1.5 km, Makivik believes variable weather, ice and water conditions would cause ships to deviate from that route. It recommends Baffinland provide more information on sensitive wildlife areas along the shipping route and provide Makivik with vessel monitoring data.

Like DFO, Makivik recommends Baffinland employs more rigorous marine mammal monitoring plans, instead of instituting a blanket 10% threshold for depletion in marine mammal populations. Considering many of the area’s species, such as Ungava beluga stocks, are endangered already, it says “changes of less than 10% will result in irreparable harm to an already depleted resource.”

Despite the fact that the FEIS predicts ship noise, icebreaking activities, ship strikes and potential oil spills will have no considerable impact on the whales, walruses, seals, polar bears, birds and shellfish that Nunavikmiut harvest, Makivik recommends that Baffinland consider another shipping route altogether. It also advises Baffinland to create spill response plans with the communities along the shipping route, adding, “Baffinland has overestimated the capacity of the Canadian Coast Guard to repond to an oil spill or other vessel accident occurring within the Hudson Strait.”

Makivik criticizes the FEIS’s assessment of cumulative impacts on the marine environment for being “only qualitative,” and for determining those effects will be temporary and non-significant. It recommends that Baffinland take the entire lifespan of the project into account in its cumulative assessment, as well as other mining and shipping activity in the Hudson Strait, instead of just the first deposit of its own project. Makivik Corporation is a designated James Bay and Northern Quebec organization created to protect Inuit rights, interests, and financial compensation under the Nunavik Inuit Land Claims Agreement (NILCA). The NILCA is modeled after, and very similar to, the Nunavut Land Claims Agreement, but it also protects Inuit harvesting rights outside the Nunavik Marine Area if those areas have been traditionally used by Nunavik Inuit. If a separate environmental assessment were recommended by the Minister, the process and timeline would be almost identical to the one the Mary River project has already undergone in Nunavut.

Igloolik community radio will be discussing the implications of Makivik’s intervention this week on Nipivut Nunatinnii, Thursday, 8-10 pm.