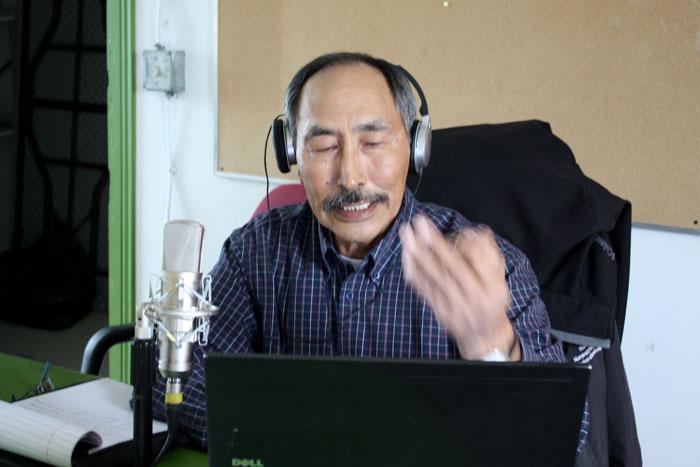 Last Tuesday, QIA negotiator Paul Quassa spoke over Igloolik community radio to summarize the 24-article Inuit Impact and Benefit Agreement (IIBA) offer the association made to Baffinland earlier this month. QIA expects to receive an answer from the mining company within the next month. Negotiations on the IIBA must be completed before the Nunavut Impact Review Board (NIRB) can make a recommendation on whether the mine should go ahead to the minister of Aboriginal Affairs and Northern Development. Quassa’s summary is translated below.

Articles 1 through 3: describe the project, set definitions for the IIBA and define its principles, which state that the mine will have to serve the community, provide long-term benefits to Inuit in the form of training and employment in entry-level and management positions, as well as in the form of business contract opportunities for the most impacted communities.

An Inuit executive committee will be formed to ensure that Baffinland follows the agreement, that Inuit employment targets are being met and the communities are receiving the financial benefits that Baffinland has committed to. The executive committee will also monitor the impacted communities to ensure that all community members, not just the employees of Baffinland, see benefits from the mine.

A second, management committee, under the executive committee, will also be formed to monitor what contracts are given to whom, and to assess whether Inuit content requirements are being met.

A liaison will also be appointed in each community, who will co-ordinate monitoring and reporting between monitoring committees, QIA and Baffinland, alongside Baffinland’s IIBA co-ordinator.

Nunavut Tunngavik Inc. (NTI) will receive regular royalty payments because the Mary River project is on Inuit-owned, subsurface land. The federal government and the government of Nunavut will also receive tax payments from the project. The QIA receives $600,000 per year to lease surface Inuit-owned land as well. In addition to these payments, Baffinland will set aside money for beneficiaries, through QIA, in return for continued Inuit support for and consent to the project.

All contracting opportunities will be available to Inuit-owned businesses. Baffinland will assist Inuit contractors by dividing large contracts into a series of smaller ones open to bidding by more than one Inuit-owned company.

NTI keeps a running list of all businesses in Nunavut to ensure that Inuit-owned businesses are bidding for contracts equally with southern-owned contractors. Companies in communities closest to the mine must be considered before those in areas further away. Baffinland will also assist Baffin Inuit firms by providing them with a start-up fund, administered by QIA.

The company will hire an Inuk employment co-ordinator, selected by QIA, to work with Inuit, to help them write resumes, fill out applications and acquire the requisite training for available positions.

Employment and equal opportunity goals will be set here, including hiring quotas for women and men at the mine site.

Training will be conducted in collaboration with the government of Nunavut Department of Education and Arctic College. In the first years of operation at Mary River, Baffinland will provide $1 million for Inuit training, and throughout the life of the project, the company will create a $25,000 scholarship for Inuit high school graduates.

Later on in the operation phase of the project, the executive committee will work with Baffinland to find areas where the company can contribute to youth training and employment at the mine, through additional scholarships, awards and training programs.

Since Baffinland intends to ship iron ore year round from the mine, it will work with local Inuit and Inuit workers to develop shipping and monitoring practices to see that marine mammals and birds are not unnecessarily harmed by the project.

The Mary River work site must be “Inuit-friendly,” meaning that both Inuit and non-Inuit workers must undergo cross-cultural training, with a focus on educating non-Inuit in Inuit culture, and not the other way around.

Though the dominant language of the mine will be English, Inuktitut and English training programs will be available to all workers at the mine site. Non-fluency in English cannot be a barrier to employment.

All mine site documents, notices and publications will be available in English as well as Inuktitut, as well as job applications.

Employment assistance will be available to Inuit at the site.

Counsellling and social support services will be available at Mary River, as well as on-site Inuit elders. Nurses will also be on call to deal with medical issues.

Country food will be available to Inuit and, where the government approves, hunters may supply country food to non-Inuit workers.

Freezers will be available so Inuit can eat their country food frozen if they like.

There will be a “zero-tolerance” drug and alcohol policy.

Inuit hunters are assured of their right to hunt after hours under the Nunavut Land Claims Agreement (NLCA). Wherever safe, rifles may be stored at the mine site, and Inuit may hunt anywhere further than a mile from the work site. Maps will be provided to Inuit hunters, showing clearly where guns can and cannot be used.

The most impacted communities, such as Igloolik, Pond Inlet and Hall Beach, must be provided with financial support to aid the families of workers who are not at the mine.

Baffinland will establish an Ilagiiktunut Nunalinnullu Pivalliajutisait Kiinaujat fund for this purpose. Money will be provided for social work, Inuit cultural activities and organizations or community projects. How the fund is spent will be determined by each community individually. The use of this fund will be monitored by the IIBA executive committee.

For Inuit travelling through the Mary River site, Baffinland will provide fuel, shelter and country food to off-set the inconvenience of detouring around rail and shipping routes. Baffinland must also provide notices pointing out safe hunting and travel areas through and around the project site. Inuit cannot be stopped from harvesting and travelling in the area for any reason.

Baffinland and QIA will establish an annual project review forum, where local Inuit from impacted communities can discuss project issues directly with the company.

Recommendations from all government agencies who reviewed the project will have to be monitored to ensure that Baffinland continues to comply with them.

In monitoring and assessing the success and compliance of the project to reviewers’ guidelines, Baffinland will have to take Inuit Qaujimajatuqangit observations of the socioeconomic, environmental and cultural effects into account.

Baffinland will compensate Inuit for animals killed incidentally by ship, train and truck collisions, or any other accidents, such as fuel spills.

Article 33 of the NLCA determines that Inuit have a right to preservation of their archaeological sites and artifacts. Employees cannot disturb archaological sites, and wherever Baffinland intends to disrupt a site or move artifacts, the IIBA executive committee will defer to Inuit Heritage Trust.

Article 19 of the NLCA guarantees Inuit rights to carving stone. As well, if Baffinland discovers soapstone deposits on or near the project site, it must notify QIA immediately and make the stone available to Inuit.

This section will set out the specific monitoring reports that Baffinland must file periodically to QIA’s executive committee.

If a dispute arises regarding Baffinland’s commitment to anything included in the IIBA, the management, and then the executive committee are notified, then QIA and Baffinland presidents, and then a mediator.

QIA and Baffinland will review the IIBA every three years and make amendments where necessary.

The IIBA will come into effect 30 days after the minister receives it, and its terms are binding until the end of the project life.

English will be the authoritative version of the IIBA but an Inuktitut version will be available.

Info sessions about the Mary River project and final hearings are scheduled for June 4 at 6:30pm in Igloolik and June 5 at 6:30pm in Pond Inlet.