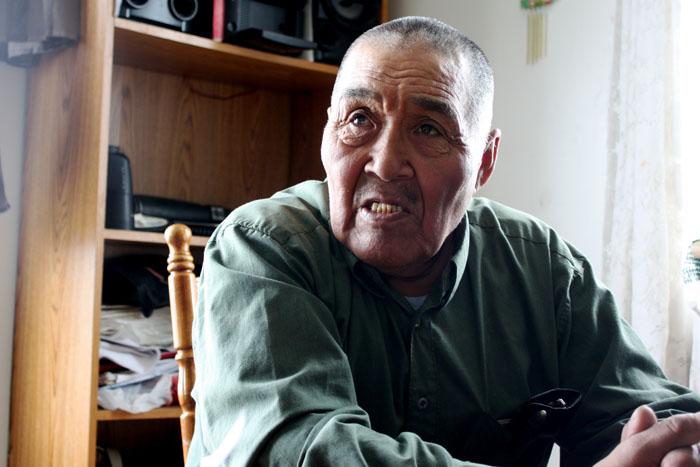 "Where they're building the railway and where the port will be, there's hunting going on there"

David Irngaut can’t say how long he’s been president of Igloolik Hunters and Trappers, but he remembers the first caribou he shot at the Mary River site at 11 years old. “I was with my uncle,” he says, “and when we finished butchering it, he said, ‘let’s eat the bone marrow.’ He told me to find two rocks to smash the bone.” The first rocks he found were iron ore.

According to archeologist Robert McGhee in Last Imaginary Place, ancestors of modern Inuit settled at the Mary River site while migrating in search of iron ore. They made weapons and tools with it, and traded it with Greenland on the east and Asia on the west.
More recently, says Irngaut, the Mary River site has served as a meeting place for hunters from Igloolik, Arctic Bay, Pond Inlet and Clyde River.
“Every summer I go there,” he says, “and during the winter, where they’re going to build the railway and where the port will be, there’s hunting going on there. It’s a general hunting area for caribou, for clothing.”

“For the past two years,” he adds, “I’ve been noticing less ring seal and less bearded seal in that area. Baffinland has been testing sonar to sound the depth of the water, and sea mammals are hearing it big time. I use sealskins a lot for ropes and food, and I’ve been noticing it’s been harder to hunt seals.”

Asked whether the mining activity will decrease the haul of more than 350 Iglulimmiut who currently earn their main income hunting and trapping, he says, “Most likely. When the ships are going through Steensby Inlet and Foxe Basin almost every day, it’s going to affect the migration routes of the fish.”

“With caribou,” he adds, “they migrate. They’ll just jump over the tracks and keep going. But sea mammals will move away from the sound and find another home.”

Nevertheless, Irngaut says, “I don’t mind the mining. It’s going to create more job opportunities for the community.” And even though many animals will move away, there will be increased opportunities for those hunters who can find them. With more people in the community making more money, he thinks the grocery stores will raise their prices and with that, the demand for country food will also increase. “So hunters may also have more opportunities to sell and make money.”

“Before, when I was hunting more actively,” says Irngaut, “I would not have been interested in being on a hunting board. “But when things slowed down, I got more into board meetings. I’ve been a board member, a vice president and now I’m president.”

Recently, he and the board have been working on an alternate shipping route in case high concentrations of animals block the existing route. A Baffinland representative will attend their presentation on request.