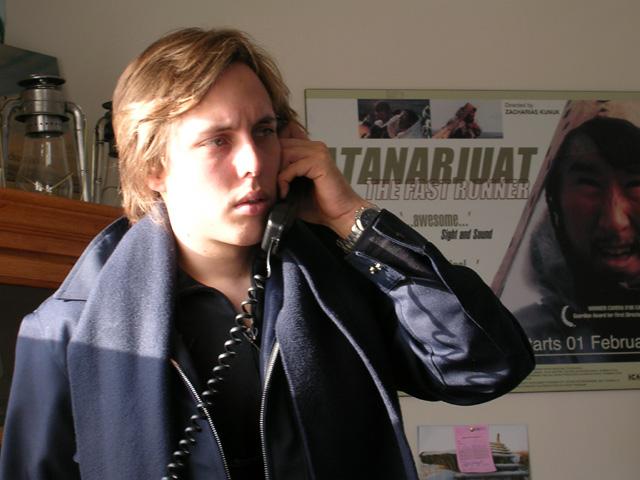 How did you get started in the film industry?

Well, while I was at school at Concordia, I was in my 3rd year and I had made a short film, about 17 minutes, and it got noticed by some people. I went to Germany with it and showed it at a festival there, so it was really fun. For me it was a way to introduce myself to this industry. It was something that allowed me to put my feet where I want them to be, more than I was before. I never used a CV to get jobs in this industry, I always worked with my films. After I left school I worked on some little things; no major projects, and then I got a job offer at Radio Canada, directing the public affairs reports. I worked there for one year. I didn't want to do television, because television is like sprints and I wanted to do film which is a marathon. I'm more inclined to do marathons rather than sprints. You don't have time or a second chance in television. When I was still in school, I contacted Norman through the Isuma website after I saw Atanarjuat and wanted to work with Zach and Norman. I was deeply impressed. The Fast Runner had a resonance that reminded me of some films from the 60's and 70's that were made in Quebec. They made fiction films that bordered on documentary; bringing a higher level of realism. I saw that in Atanarjuat and it blew my mind. This film is more improvised at the moment. We see how the actors are feeling and where they position themselves, ok, so we'll do that this way, and we'll shoot that way, and this approach is rare in film making. When they started making The Journals of Knud Rasmussen, I couldn't say no.

What does your job entail on this project?

I've been working on a little bit of art direction; looking for props for the ship scenes. Above that I've been working with the camera, buying and organizing all the cables and accessories. Everything related to the camera other than actually pressing "record" - that's Norman's job (laugh)! - is my job.

Any problems so far?

Yeah, we had a major problem yesterday, there was an internal breakdown in the camera. It is very humid inside the igloos. So we took the camera from the igloo, wrapped it in a garbage bag and took a 10 minutes skidoo ride to the site where we were going to shoot the blizzard scenes. We thought it would slowly adapt to the cold, but this HD camera is more sensitive than previous Sony cameras, so the internal parts froze. One of the sensors inside the camera stopped working so the tape stopped. We tried ejecting the tape manually with a screwdriver, but the tape was stuck.

Can you walk me through a typical day?

First thing I do when I arrive is to bring the camera to the set about two hours before we start shooting to warm it up in the location where it is going to be used. The machine can then react to its environment. We have to be really careful about that in advance. I leave the camera on and just change the batteries. After I do that I set up my monitor and other devices and have all my tools at hand. When we start shooting, I set the camera, give it to the director of photograly (Norman Cohn), and when he gives it back I clean the view finder, change the lens, tape, and battery. He only has to focus on which way to shoot and pressing record and then I make sure it's ready to go again.

I definitely want to make another film. I have to start developing my project. I have a vague idea of what I want to do. The great thing about working on productions like this one is that you see how other people work, and you learn new techniques and it changes the way you think about doing films. It's a very sane and necessary way of working. You take from that what fits with your own vision. I see them working and some things are purely efficient. I love how they work with non-professional actors. The thinking behind the acting is important. I'm going to find the right person for the role. A real person; who can play himself or herself and still get what you need for the character. To see on screen an actor you know, like Brad Pitt in Troy, you're like, "Oh, did you see Brad Pitt in Troy," but he's always Brad Pitt on screen so you can't always believe it. So when you work with non-professional actors, like Leah [Angutimarik], you will end up with Apak on screen and no one else. Nobody says 'hey that's Leah and I saw her in Igloolik' no one has ever seen her, so it's purely believable. If she's good at being herself, she'll be great in the film. I'm profoundly impressed by this experience; the non-actor thing. That is a revelation.