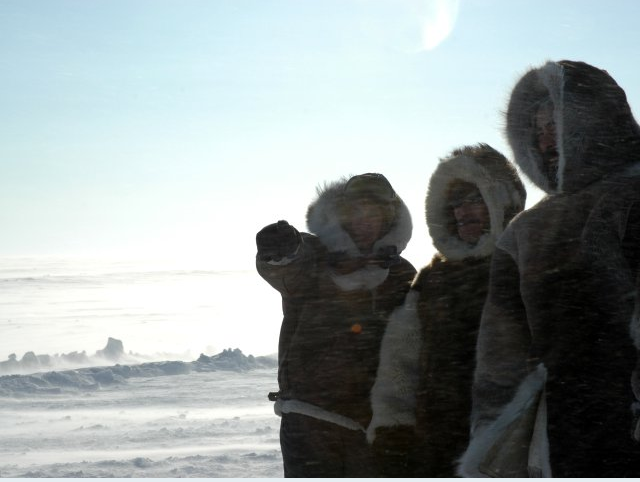 Wednesday morning. There's a strong wind blowing through Igloolik. It's not quite a blizzard - there's reasonable visibility - but the air is full of snow, and it looks like it's getting worse.

The original plan for the day was to finish shooting Apak's love scene, but that plan's been abandoned, because it would be far too cold in the igloo, given the weather. Instead, the new plan is to start with an episode in Aua's igloo, where the great shaman Aua (Pakak Innukshuk) scolds his daughter Apak (Leah Angutimarik); and then hopefully move on to a scene set in a blizzard, as long as the blizzard gets worse by the afternoon. (These must be the first film-makers in history to pray for a blizzard to get worse.)

I find the skidoo ride over to the Igloo Snow Palace quite traumatic today. A layer of ice forms behind my glasses; I feel the moisture around my eyelashes freezing. The wind seems to be ripping the skin off my face, stripping away the flesh, cutting right down to my skull. Of course it isn't, it's just giving me mild frostbite at worst, but I'm only a Londoner; I find the weather in Toronto or Montreal quite intense enough. For me, Igloolik is just off the scale.

The filming in Aua's igloo goes well. It's Leah's first major dialogue scene as Apak, and I have to say here and now, she is fantastic. Especially in close up, her gestures and glances are very eloquent. She delivers her lines with an intense look in her eye; there's no doubt that Apak is a character with great shamanic power in her own right.

Towards the end of the filming, we hear the unmistakeable howling of dogs outside. The dog teams have arrived to shoot in the blizzard! I go out to look at the dogs. They're beautiful. Each team has eight white Arctic Huskies, their faces all snowy, pawing the ground.

The blizzard scene we're hoping to film is a big one, with Inuit and Danish characters making a difficult journey through dangerous weather. We spend a couple of hours preparing, as the weather gets steadily worse: windier, colder, snowier. Visibility is diminishing, though there's still enough to film in.

I stand outside in the middle of it. The wind is strong; I have to dig in and make an effort to stand still, otherwise it would blow me over. The snow is whipping into my face again. I go back into the relative warmth of the catering tent, and chew on frozen bread until the shots are set up, and the film-makers and actors go out into the blizzard.

Half an hour later, they're back. Camera Assistant Felix Lajeunesse staggers into the tent first, bearing the precious HD camera, the only one we've got. He puts it down, in obvious pain. His hands are red and raw. Lucy Tulugarjuk warms them up; it's obvious that he has no feeling left in them.

"The camera stopped working," he tells us. "No more filming today." It seems that they got the first shot of the scene, but as they started on the second shot, in the middle of all the whipping snow and wind, the camera flashed up a warning, and then stopped working altogether. They tried to eject the tape, but the eject button wasn't working. They tried manual ejection, using a screwdriver, but the whole mechanism had locked.

Some of the actors come in, looking freezing despite their thick furs. "Ikki!" they all say ("Cold!") I go out to see the others. Director Zach Kunuk has ice in his moustache; Kim Bodnia (playing Peter Freuchen) has ice in his beard. Norman Cohn's eyelashes are frozen solid with chunks of ice the size of coins.

"We got one shot, and it was fantastic," he says. But they didn't get the whole thing. They're going to have to do it again. Not today, though. Right now, they're just trying to get the camera working again.

So that's a glimpse of what's it's like, film-making in the Arctic, trying to do hi-tech work outdoors in the middle of a blizzard. Sometimes, it's just not possible. Sometimes, the conditions defeat you. But you don't give up. You find the patience, resourcefulness and determination to try again, and again, and again. And they will.