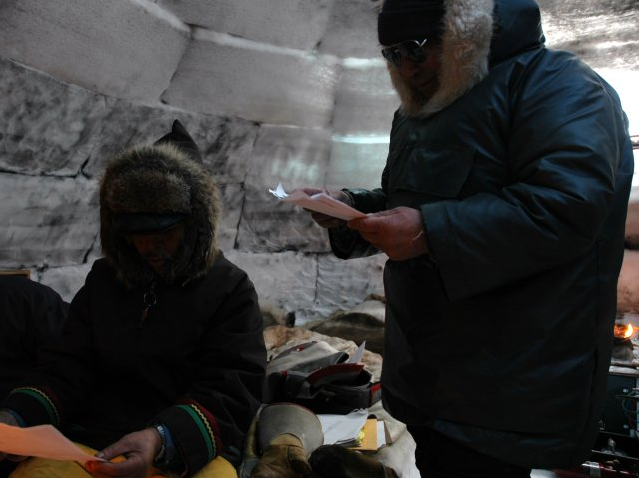 The good news first. The camera is OK. After its traumatic shut-down during the blizzard scene, it reset itself overnight and is now working fine. But will it function next time we try to shoot during a blizzard? There's only one way to find out...

And the bad news is: we have no idea when the next blizzard might be. There's no telling; the crew have to be ready to capture it at a moment's notice.

"We have to hope we get another one," says co-director Norman Cohn. "You don't get too many chances. But if we get it right, it'll be something no-one's ever done before."

Filming has proceeded in much calmer fashion over the last couple of days. On Thursday, we shot a big scene in Aua's igloo with 15 actors: 10 adults and 5 children, all Inuit from Igloolik.

At the moment that they entered the igloo, the children whistled softly and grinned at each other. Some of them had never been inside an igloo before; others had never seen one so big. I don't think they'll ever forget that moment. There's a sign up in the Isuma office that says: 'SMILE: IT'S ONLY A MOVIE!' - but at times like this, it feels like something much bigger. Imagine being 8 years old, and acting in a film that gives you your first experience of an igloo! Such moments are a crucial part of Isuma's project - seldom remarked upon internationally, but clearly vital on the ground.

Today, we manage to shoot three scenes, in three different igloos, as the shaman Aua (Pakak Innukshuk) shows the explorer Knud Rasmussen (Jens Jorn Spottag) his world. The camera is hot and rolling; pages of script are dispatched.

A couple of weeks ago, Jens confided to me that he was worried about his part, particularly his command of the Inuktitut dialogue. He needn't have worried. He has grown into the role of Rasmussen, embodying his character's calm thoughtfulness, watching everything without judgement or comment, just taking it all in. He also seems to have formed a bond with Pakak; the two of them are often to be seen enjoying a quiet laugh together on set.

Mind you, this set doesn't lack for laughter. Zach Kunuk seems to have taken his 'Director Eats Set' reputation as a challenge. He is often to be found nibbling at the props. Today, he upped his game, turning his hand to smoking the set - specifically, some tobacco in Aua's igloo that might very well have been authentic 1920s tobacco, to judge from the smell it produced.

Some readers of this blog have asked about my reference to frozen bread in the last entry. Up at the igloos, everything freezes. To give you an idea of what it's like here: I take a Nalgene bottle of water to the set every day. And every day, the water turns to solid ice. You leave a box of sandwiches out in the morning; by afternoon, they'll be frozen bread with crunchy frozen filling.

But frozen bread isn't so bad. It's chewier and lasts longer than regular bread. I think I'm getting to like it.