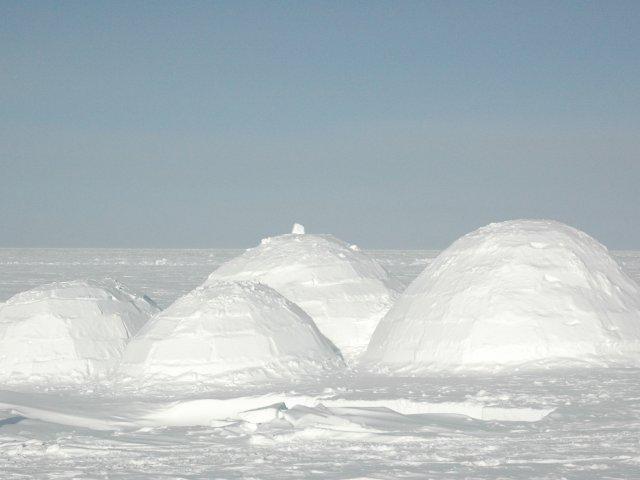 Shooting starts today in the Igloo Snow Palace that's a 15-minute skidoo ride out of Igloolik. It's an amazing piece of architecture: seven igloos, all linked together. There's a central spine of three large structures, each big enough for a dozen people. Off the middle igloo, there are four smaller ones, which are still tall enough to stand up in comfortably.

In the film, this is where Aua the shaman lives with his family. In reality, the making of these igloos was supervised by Igloolik elders David Irngaut, Louis Uttak and Pauloosie Qulitalik, who apparently also spent last night sleeping here.

I've never been in an igloo before, and I feel kind of boyishly excited as I enter the Ice Palace. I'm amazed at how warm it is inside. It's freezing cold outdoors - much colder here on the flat tundra than it is in town, where the buildings help to block the wind. Inside the igloo, even without the Qulliqs (seal oil lamps) burning high, I feel warm enough to unzip my parka, remove my furry hat and gloves. (I shouldn't be amazed - the igloo is a great example of human culture working in total harmony with the environment - but still, I find it surprising that something as cold as snow should be such good insulating material.)

It's beautiful inside an igloo, too. The blocks of ice rise upwards in a graceful spiral towards an air hole in the ceiling (Kagnirq). The roundness of the construction feels very peaceful - as does the light, which is white-blue and seems to sparkle gently as it filters in through walls of snow.

Inside Aua's living quarters, there are comfortable seating ledges spread with caribou fur rugs. A kettle hangs over a Qulliq. In the kitchen area there's a healthy supply of food: a walrus head (complete with whiskers and tusks), some seal, some fish. There's an assortment of knives and ulus (cutting tools), and a row of toy Qamutiks (sleds) made of caribou jaws.

It all looks very timeless and real, not like a film set at all - except for the High-Definition camera and sound gear, ready to roll!

There's a problem, though. The crew don't want journalists leaving big clunky bootprints everywhere; our 21st Century tread-marks would ruin the ice floor of the set, which is meant to be from the 1920s. The cast and crew are all shod in Kamiks (traditional Inuit footwear, made of sealskin), which leave no such marks on the ground. There are no spare Kamiks to go round, and they're not the kind of thing you can buy in the shops.

It's just another one of the unique challenges of Arctic film-making - and Arctic film journalism. The Sila team are working on a couple of leads, but in the meantime, we come up with a novel and eye-catching solution. Katharine Irngaut spends the afternoon tying fleece-wrapped blocks of foam to the bottom of our boots (see pictures). Don't they look great? Could be the must-have fashion item of the Spring...

By the time we get our home-made neo-Kamiks together and skidoo it over to the Snow Palace, it's 5pm, and shooting for the day has just wrapped. We've missed it all - but Zach and Norman seem happy with what's been achieved. And everyone has something to say about our footwear!