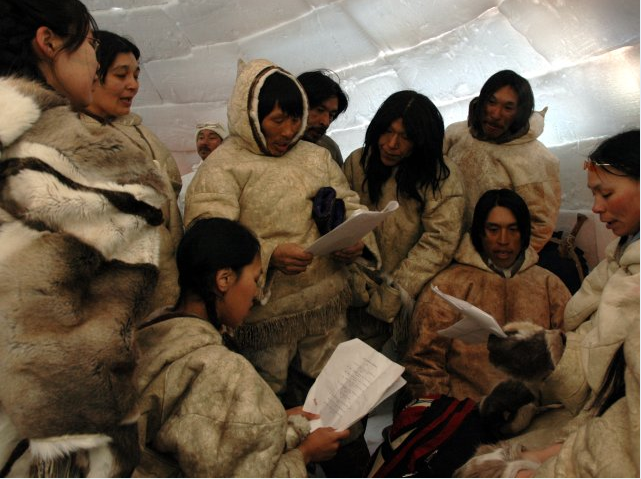 Wednesday, late afternoon. We're shooting in the biggest igloo, right in the centre of the Snow Palace. As I walk in, my first thought is that it would make a great party space - and that's exactly right, because tonight we're shooting a party scene.

The igloo is big enough for 30 people. All the way round the inside wall, it's been kitted out with snow-block seating ledges and caribou furs, and half a dozen Qulliqs (seal-oil lamps, which give off a wonderful light, though they do make your clothes smell of burning seal oil, after a while.)

The actors arrive one by one, bearing traditional drums, three feet wide. They start warming up, singing ajaja songs and softly beating the drums. I'm hypnotised by the sound of the drums: it's such a deep, resonant tone.

One of the actors in this scene is Rachael Uyarasuk, who is 100 years old. Before shooting, she tells me (with Lucy's translation) that she's excited to be in the film, because she lived through the events that it's portraying. She remembers hearing about white people coming to Nunavut at the time of Captain Comer, in the early 20th Century; and she remembers the time later in the century when ajaja songs were banned, and Inuit were made to learn Christian hymns instead. As I watch the action this evening, I remember her words, and it's clear to me again just how important this film is.

Tonight, everyone is going to get a chance to perform: to sing, to dance, to play the drums. Zach Kunuk and Norman Cohn tell the cast that only the best performances will make it into the final film, so there's a competitive edge to it. Kim Bodnia (the actor playing Danish explorer Peter Freuchen) approaches the directors with an idea for an improvised dance he wants to do. "You have free rein," says Norman. "You will never have a chance to perform in a wilder, sexier spot than this one!"

As evening falls, the drum beats get louder, resonating through the igloo. The singing is getting stronger, the women chanting songs that will still be running through my head days later. Norman is setting up the camera; Zach is at the monitor. The scene looks great, the amber Qulliqs really light up the actors' faces.

Peter-Henry Arnatsiaq takes off his top to do a rhythmic dance with the drum, as the crowd sings behind him in the flickering light. It's intense, compelling to watch; he seems completely absorbed in the music - and watching him, I am too.

Then big Kim Bodnia steps in with his dance, and shifts the mood instantly to comedy, bringing a great chorus of giggles from the crowd. Norman shoots it all documentary-style, moving around the igloo freely with the camera slung over his shoulder, getting right up close to the action as one actor after another does their thing.

The singing and dancing goes on long into the night, the actors taking their turns in the middle. It's all improvised, and feels very much like being at a real party. Unexpected things keep happening - none more than the surprise that's planned for the end. I'm not allowed to tell you what it is. Let's just say this party builds to a climax you'll never forget!